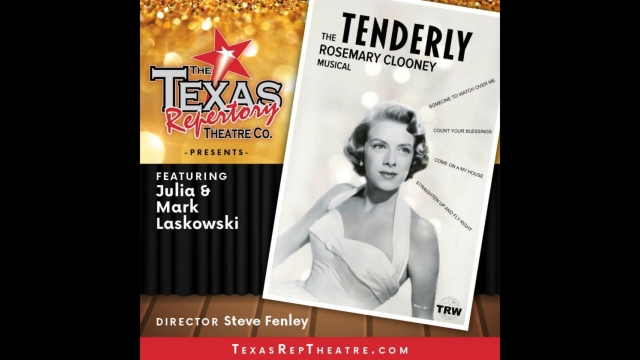 They say that “timing is everything,” but after a pandemic year-and-a-half of being unable to fly back east from Texas to visit the bulk of my family, I am now having the chance to enjoy such a trip, just when a show I would love to have seen is about to open in the Houston area. The Texas Repertory Theatre that I have enjoyed reviewing so many times in the past,* is about to present its production of “TENDERLY” The Rosemary Clooney Musical, by Janet Yates Vogt & Mark Friedman. What I wouldn’t give to be in town for that one! I say this because I have just enjoyed an irresistible hour-long preview podcast of the show (with photos), that is now available for all at the company’s website, www.TexasRepTheatre.com** The delightful hour-long conversation features co-stars Julia Laskowski (as Rosemary), her husband Mark Laskowski (in a one-man triumph as all the play’s other characters), Artistic Director, Steve Fenley, and host for the program, Bob Stevenson, popular Houston broadcaster for station KUHF, where he is often referred to as the “Voice of the Arts.” I have had several pleasant opportunities to see Mr. Stevenson’s elegant hosting skills in eloquent action when, on numerous occasions, he has emceed Montgomery County’s gala evening at Conroe’s Crighton Theatre, for the annual YOUNG TEXAS ARTISTS Concert of Finalists, showcasing the finest young collegiate classical musicians in that official Texas State Competition. His vast musical knowledge, and experience behind the microphone hosting Houston Public Radio’s “The Front Row,” made Stevenson the perfect choice to elicit this podcast’s fascinating cast interviews that bring to life the show’s many-facetted story of the late Miss Clooney.

Who among us can resist that annual temptation to settle in for the cheerful musical delights of yet another telecast of Paramount’s delightful musical, “White Christmas?” With its infectious tunes and lush Irving Berlin score, the dazzling dancing of Vera Ellen, and the hokey comedy from the pairing of Danny Kaye & crooner, Bing Crosby, that would all be enough to make it a perennial holiday treat. But the film’s warmest glow would emanate from the radiantly beautiful Miss Clooney, and her warm, embracing vocals that made her such a popular star of radio, television and film. Those joyful images remain with us from year to year, but in this production of TENDERLY we learn there was so much more to this complex woman whose ultimately triumphant life was not always as glamorous as it might at first appear. The many insights Miss Laskowski offers about her character during this captivating podcast suggests that hers will be a richly affectionate performance in the role. Better still, this sampler makes it clear that Laskowski’s lovely voice is perfect for Clooney hits like, “Someone to Watch Over Me,” “Hey There!” “Come on a My House,” “Straighten Up and Fly Right,” and of course, the show’s title tune. Sight unseen I sense the show will be a hit.

We also learn of a life-changing and tragic moment for Clooney when she was present (with two of her children) at the time Robert Kennedy was assassinated. The event precipitated a major emotional breakdown that had her in therapy for years during her struggles with drugs and romantic relationships. Thus we have the interesting plot twist that emerges as Mr. Laskowski portrays the psychiatrist who hears Rosemary’s life story as she tells it during therapy. Intermittently he “becomes” the many characters that peopled her life, from Bing Crosby to her husband, Jose Ferrer and countless others, while Clooney’s many song hits sweetly thread it all together. Clooney has been aptly described as an “American musical legend of unparalleled talent and unbridled personality.” That is certainly true, but I urge readers to sample the podcast to get a sense of how much more there is to her story. Hopefully some of you will be more fortunate than I, and actually see the show. If so, please send me your review.

TENDERLY: The Rosemary Clooney Musical will be performed at Charles Bender Performing Arts Center (611 Higgins St, Humble, TX 77338) July 16th – July 25th. Performances will be at 8pm Fridays and Saturdays, with Sunday matinees at 3pm. Admission: $ 30. For reservations & information call the box office at 281-583-7575, or visit the website: http://www.texasreptheatre.com

**A direct YouTube link for the podcast can be found at https://youtu.be/d8_pkDmVNw8

David Dow Bentley III, writes columns about the performing arts which are featured in newspapers from the East Coast to the Gulf Coast. A member of the American Theatre Critics Association (ATCA), The International Theatre Critics Association, and America's oldest theatrical club, The Lambs, he also had long service as the editor of The Lambs' Script magazine. Mr. Bentley may be contacted via e-mail at ThePeoplesCritic3@gmail.com.
View all posts by The People's Critic →
This entry was posted in Uncategorized and tagged musicals, Rosemary Clooney, Texas Repertory Theatre. Bookmark the permalink.