Donny Edwards Gives a Royal “TRIBUTE TO THE KING” 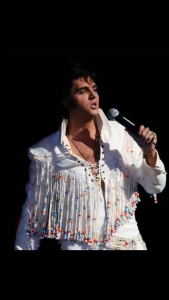 Last weekend, after a year of repeated pandemic-related concert rescheduling, the Crighton Theatre’s much anticipated, and long-delayed opening night of “An Authentic Tribute to the King,” had finally arrived to the delight of Friday night’s sold-out crowd. The many eager ELVIS fans in attendance included plenty of devoted groupies of the show’s brilliant star, Donny Edwards, the only Elvis Tribute Artist who has ever been honored to perform his show at the Graceland home of the late Mr. Presley. Perhaps “sold-out” seemed like a strong phrase on this night, as theater manager, Jim Bingham, explained to the audience that Crighton officials had determined that considerable social distancing in-house was still in order during the continuing pandemic, as was the continued wearing of masks when moving about the theater and lobby areas.

But none of that seemed to matter as Mr. Edwards’ rocking, 7-piece band, FEVER, took to the stage, along with his power-house trio of back-up singers. Soon the audience would understand why Edwards has been widely acknowledged as “The Next Best Thing to the King!” 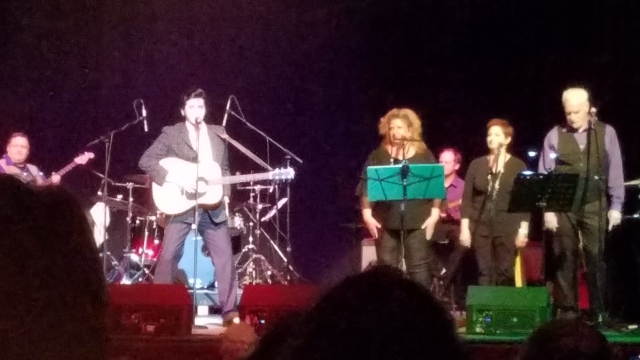 With that as a musical backdrop, the star finally emerged on stage to a roar of approval as he launched into a sensational, “Shake Rattle & Roll,” that was highlighted by all the high energy, flexible gyrations and handsome good looks of the star he resembled so strikingly in both appearance and vocal talent. Moments later, without seeming to pause and catch his breath, Edwards would shift gears to offer a soaring, “Heartbreak Hotel.” He would joke with the audience about how they should only view him “from the waist up” as he performed the one-time censored gyrations of a “Don’t Be Cruel” that affirmed his early stardom on The Ed Sullivan Show. The rich tones of his warm and mellow, “Love Me Tender,” were only diminished by a guitar accompaniment that was too loud and harsh. A fierce, “Wear My Ring Around Your Neck,” led into a rockin’, “Jailhouse Rock.” There would be still more touching heartbreak with both, “She’s Not You,” and “One Broken Heart for Sale.” When closing out the first part of the concert, the vocal mastery seemed to reach still another level of excellence with a powerful and resounding, “It’s Now or Never,” that seemed to reveal a voice that could very well have moved in opera circles. 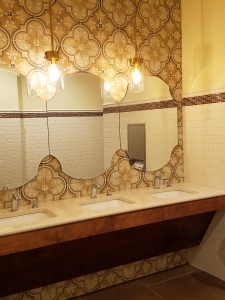 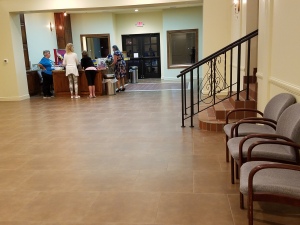 Intermission gave the audience the chance to visit sections of the theater’s recent renovations and expansion. The spacious new lobby and concession stand areas were a big hit, as were the glamorous new restrooms that even feature hot water at the attractive sinks.

As Intermission came to an end, the excitement would begin to build again while the band began to play the thrilling and mysterious opening strains of the “Sunrise” fanfare that begins Richard Strauss’ 1896 composition, “Thus Spoke Zarathustra,” a theme quite familiar to fans of Stanley Kubrick’s 1968 film, “2001: A Space Odyssey.” With that, the star returned to the stage in a glamorously fringed white suit reminiscent of many worn by The King, and launched into a thrilling, “See See Rider,” that seemed to generate the kind of Las Vegas showroom excitement and electricity that many may associate with the “Neon Capital of the World.” The “Burning Love,” number that followed kept the excitement going. My only regret during this second act was that frequently the sound volumes seemed designed for huge Vegas showrooms, and sometimes buried fine vocals in unnecessary noise. But Edwards also lightened things up from time to time with bits of humor from the stage.  While performing a medley of Elvis hits from his concert years in the 1970’s, he cautioned the audience: “Those of you who remember the ‘70’s probably weren’t there.” Then, joking about pains associated with his strenuous and acrobatic gyrations during performance, he recalled, “I remember my Grandma used to smell like BENGAY, and now I know why.” Although the concert was not at all political, Edwards managed to slip in one anecdote from Mark Twain that I just loved: “Politicians are like diapers. They need to be changed often, and for the same reasons.”

But there was still more great music to follow, with, “Walk a Mile in My Shoes,” “Twenty Days and Twenty Nights,” and—speaking of “great,”— a stunning rendition of Elvis’ Grammy-winning, “How Great Thou Art.” Other delights included, “Johnny Be Good,” “The Wonder of You,” and “Caught in a Trap.” Clearly, the star had put together such a stellar “Tribute to the King,” it seemed he had really earned the right to close with Paul Anka’s classic composition for Sinatra, “My Way.” As Ed Sullivan used to say, it was “a really big show.”

The Crighton Theatre is located at 234 N. Main in downtown Conroe, Texas. For information on future productions, visit www.crightontheatre.org, or call 936-441-7469.

A member of both The Lambs Club Inc. and The American Theatre Critics Association (ATCA), the columns of DAVID DOW BENTLEY III have appeared on Broadway websites, in newspapers from the East Coast to the Gulf Coast, and may be viewed online at the website: www.ThePeoplesCritic.com . E-mail may be directed to ThePeoplesCritic3@gmail.com