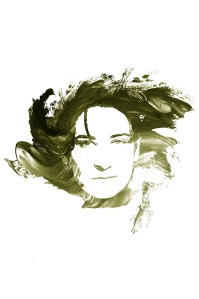 With a one-night performance in Houston Symphony’s Jones Hall, it was more than a concert. It was truly a blockbuster event when the k. d. lang INGÉNUE Redux Tour honored Houston this week, as the final stop on the group’s 2018 North American Fall Tour that had included such cities as Ft. Lauderdale, Orlando, Jacksonville, Birmingham, Nashville, Austin, San Antonio, and Dallas. One suspects they had saved the best for last, and the seven talented musicians and back-up singers who accompanied Lang seemed to be in a particularly festive and playful closing-night mood that made the night more fun than ever. 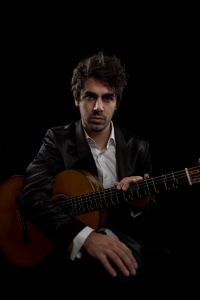 But even before the curtain would go up on the main event, there was an astounding warm-up performer who deserved as much as anyone to be on the stage of our symphony hall. Classical guitarist, Mak Grgić, stepped forward to sit before the curtain and proceeded to absolutely dazzle the audience with his astonishing skill and virtuosity as he performed a variety of traditional pieces from the Balkan Peninsula area of his native land (the former Yugoslavia). The remarkable speed, dexterity, rapid-fire fingering and emotional passion this master musician brought to the musical selections, had the audience practicing its standing ovations even before Ms. Lang arrived on stage following intermission.

Then it was on to the main event as the full-house audience rose to its feet in frenzied greeting at the first appearance of the diminutive diva. That ovation would last several minutes before a single note was sung. I knew we were in for a night of fine music as I had already had the pleasure of reviewing Lang’s talent just one month before the calamities of 9/11 when she shared the Houston spotlight with Tony Bennett in a 2001 concert at The Woodlands Pavilion: 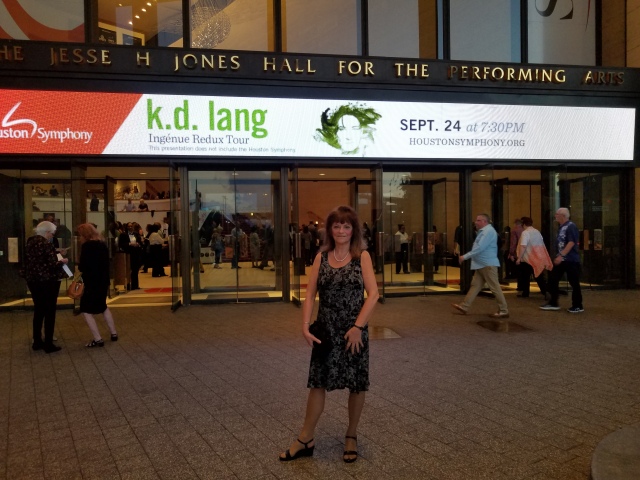 Lang fan, Debbie Little, of The Woodlands, Texas, eagerly arrives for the concert.

As this latest show’s title would suggest, the concert was largely structured as a Celebration of the 25th anniversary of her GRAMMY®-award winning, platinum album, “Ingénue,” and the recent release of its re-mastered Anniversary Edition, released by Nonesuch last year. Thus, this concert was essentially a full performance of that popular recording, and the groupies and fans who knew it well were out in force. There was no shortage of proud and animated gays in the audience, and the sense of collective adoration that shot across the footlights was reminiscent of the electrifying love that used to join Judy Garland with her devoted concert fans. Lang playfully tipped her hat to that group for attending, as she quipped, “Thanks for coming out. And if you did ‘come out,’ congratulations!” Like Garland before her, the power and passion in Lang’s voice was at once mysterious and captivating. But even more hypnotic here was the effect of the gorgeous and ever-changing lighting that embraced the stage with one of the most beautiful lighting designs I have ever enjoyed. The proscenium was softly draped with lush curtains, as hanging light globes above the stage and gleaming lantern lights at the rear completed a vision with the same warmth as the star’s voice. Rich, soft colors of crimson, gold, emerald, silver, sapphire and more would gently overtake the scene in a subtle rotation that visually enhanced every number. Those numbers would of course include the star’s classic, “Constant Craving,” and there were also selections from Lang’s 2016 recording, “case/lang/veirs,” produced in collaboration with Neko Case and Laura Veirs. And throughout the concert Lang would feature her talented cast in exceptional solo instrumental moments. It was very much a team effort, and in every way it was a winning team.

David Dow Bentley III, writes columns about the performing arts which are featured in newspapers from the East Coast to the Gulf Coast. A member of the American Theatre Critics Association (ATCA), The International Theatre Critics Association, and America's oldest theatrical club, The Lambs, he also had long service as the editor of The Lambs' Script magazine. Mr. Bentley may be contacted via e-mail at ThePeoplesCritic3@gmail.com.
View all posts by The People's Critic →
This entry was posted in BroadwayStars.com, Concert Reviews, Houston Symphony, Jones Hall, The Courier Columns, ThePeoplesCritic.com and tagged INGÉNUE Redux Tour, k. d. lang, Mak Grgić. Bookmark the permalink.