Epic Concert and Soloist for Houston Symphony at Pavilion

For those of us fortunate to have homes in The Woodlands, Texas, there have been countless opportunities through the years to enjoy the wonderful concerts of the Houston Symphony Orchestra at its “summer home,” the famed Cynthia Woods Mitchell Pavilion. The excitement of the orchestra’s annual cannon-blasting performance of Tchaikovsky’s 1812 Overture has become traditional on the eve of Independence Day. But I would suggest there has never been more musical excitement on the Pavilion stage than during last Thursday night’s concert titled, Music of The America’s. If the performance was available on a CD, I would buy a copy immediately.

There were several reasons for the extraordinary excitement that filled the air on that lovely summer evening. Perhaps first among them was the electrifying performance of conductor, Andrés Orozco-Estrada, who just began his tenure as the Houston Symphony’s 15th music director.

Let us hope he will be with us for many years to come. The animated physical energy he brings to every gesture of his baton is only equaled by his evident passion for both the music, and the 89 talented musicians under his direction. His athletic movement on the podium suggests he may have been a great ballet dancer in some previous existence, and I suspect if he just stood on the empty stage waving his arms without an orchestra, there might be those who would pay for a ticket just to watch him in action. Clearly, the excitement he projects is brilliantly reflected in the performance of the orchestra. Adding to the glow of excellence are the superb acoustics now achieved in this arena where sound problems have not been unknown in the past. An additional treat are the pristine projections on the enormous high definition screens at either side of the stage, allowing intimate looks at both the conductor and orchestral soloists throughout the performance. 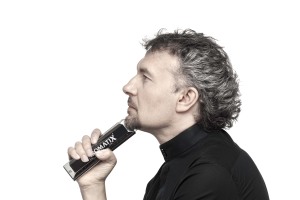 Another reason for the dramatic success of this concert was the stunning selection of exciting works, all thematically linked with Latin American roots. Two of these selections featured the astonishing talent of the evening’s featured soloist and renowned master of the harmonica, Gianluca Littera. He joined the orchestra first for the unusual and very beautiful Villa-Lobos composition, “Harmonica Concerto.” The crisp clarity and precision of his artistry as he raced up and down the full range of the instrument, blended beautifully with the fluid motions of his body and created the perfect marriage of soloist and orchestra. Further evidence of Littera’s brilliance came with his performance of the next selection, “Toledo, Spanish Fantasy for Harmonica & Orchestra.” by composer, James Moody. With its dazzling, rapid-fire pace, lashing excitement and seductive rhythms reminiscent of Ravel’s “Bolero,” it was yet another showcase for this exceptional musician.

Also on the program was Revueltas’ composition of “Sensemayá,” with its undulating pulsations and intense crescendos reminding one a bit of Stravinsky’s “Le Sacre du Printemps.” An additional treat was the performance of Piazzolla’s virtual smorgasbord of musical variations in the orchestral piece, “Tangazo.” Richly somber one moment, rhythmically awakening the next, it seemed, at intervals, to highlight every section of this great orchestra.

The cheering and delighted audience would eventually be rewarded with several encores, but not before the exquisite final offering on the formal program. It was a rapturous performance of Leonard Bernstein’s Symphonic Dances from “West Side Story.” These classic and familiar melodies from the legendary American musical have never sounded better. At the conclusion, the audience — at first spellbound — erupted in applause and shouts of “Bravo!” It could not have been more deserved.

Readers desiring information on the Houston Symphony’s upcoming performances may call The Patron Services Center at (713) 224-7575, or visit the website at www.houstonsymphony.org.