There was a special kind of warmth and intimacy coming across the footlights when director, Jim Walker, stepped out on the Crighton Theatre stage last Saturday night to speak with great affection about the cast and crew of his very marvelous new Stage Right Production of Ernest Thompson’s touching play, ON GOLDEN POND. That same warmth, intimacy and great affection would soon permeate the heartwarming and marvelous performance of the play that followed. It would be a memorable night of theatre with a memorable cast to match the fine direction of Mr. Walker. Score another winner for producers, Steven & Carolyn Wong.

This charming tale tells the story of the Thayers, an elderly couple opening up their cozy Maine cottage “on Golden Pond,” for yet another of the many summers they have enjoyed there for forty-eight years. Norman (Don Hampton) is about to become an octogenarian, and the years have begun to steal a bit of his memory while replacing it with a cranky and cantankerous disposition. This is a strain for his perky and optimistic wife, Ethel (Marilyn Moore), whose cheerful nature is the very opposite of his own. With curling lip and sneering expression, Norman grumbles about everything from the latest major league baseball news to the rickety screen door that keeps falling off its hinges. Ethel counters with good cheer as she dusts and sweeps the long-closed cottage, and admires the diving and singing of the returning loons that are visible out on the pond. With lines like, “You’re the sweetest man in the world, and I’m the only one who knows it,” we can sense that it is Ethel’s patience, understanding and joie de vivre that have allowed this longstanding marriage to survive the occasional bickering her husband so often provokes. It must be said that both Mr. Hampton and Ms. Moore have really “nailed” their rich characterizations of Norman and Ethel, and their very different ways of coping with old age. These talented actors make the characters very much their own, but on some level the elegance of their performance seems almost to be channeling the spirits of Henry Fonda and Katherine Hepburn who passed into cinematic legend playing these same parts in the 1981 film that garnered Best Actor & Actress Oscars for them, and a third for Mr. Thompson’s screenplay. Thanks to the comic wit of the play’s fine script, the relationship of Norman and Ethel is great fun to watch, in addition to being central to the plot. 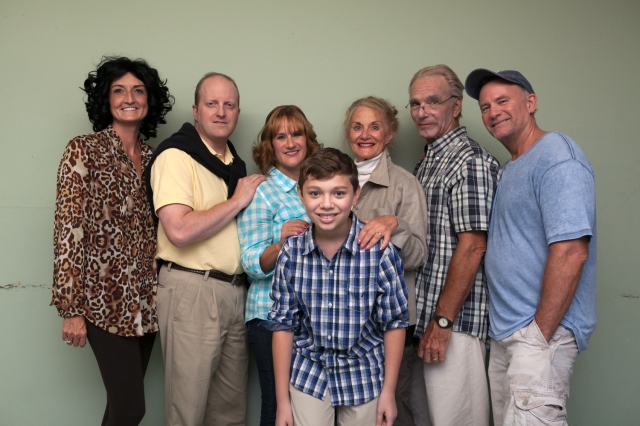 The cast of “On Golden Pond”
PHOTO: Michael Pittman Images

But the couple is not always alone as several other interesting characters visit the cottage.

Allen Dorris plays Charlie, the jolly local mailman who arrives by boat to make his deliveries of both mail and merriment. Mr. Dorris brings an infectious laugh and comic skill to his amusing performance.

Another character adding levity to the piece is the nutty and snorting switchboard operator (Jennifer Hennessy Marshall) who casually handles phone call connections for this rural community while chewing gum and manicuring her nails.

Next we meet the Thayer’s 42 year-old daughter, Chelsea (Kim Bryant), who lives in California and is somewhat estranged from her parents because she and her father have never seen eye to eye. Ms. Bryant gives a sensitive performance as a daughter hoping for reconciliation.

Chelsea is engaged to Bill Ray (Jim King), a dentist who is amusingly ill at ease in meeting Chelsea’s parents for the first time.

He has a feisty teenaged son, Billy Jr. (Ian Montez) who has a knack for getting reclusive Norman out of his shell as they go off together on local fishing expeditions. I recall describing young Mr. Montez as “adorable” when I reviewed his performance in the 2009 production of “Cheaper by the Dozen.” He’s still very cute here, and brightens up the stage with terrific acting and a winning personality.

Speaking of the stage, Jill Villalobos acts as Stage Manager, while Mr. Hampton’s lovely cottage interior set design serves as home to all this action and was beautifully constructed by Master Carpenter, Dennis O’Connor. The sound designs of Melody Montez, the effective lighting of Roger Ormiston, and the costume designs of Marieda Kilgore were all additional elements making this show a must for those seeking a really satisfying experience in the theatre. Don’t miss it!

David Dow Bentley III, writes columns about the performing arts which are featured in newspapers from the East Coast to the Gulf Coast. A member of the American Theatre Critics Association (ATCA), The International Theatre Critics Association, and America's oldest theatrical club, The Lambs, he also had long service as the editor of The Lambs' Script magazine. Mr. Bentley may be contacted via e-mail at ThePeoplesCritic3@gmail.com.
View all posts by The People's Critic →
This entry was posted in BroadwayStars.com, Conroe Courier, Crighton Theatre, Henry Fonda, Houston Community Newspapers online, Katherine Hepburn, On Golden Pond, Stage Right Players, The Courier Columns, The TICKET, ThePeoplesCritic.com and tagged Broadway, Crighton Theatre, Ernest Thompson, On Golden Pond. Bookmark the permalink.