RTC Casts a Theatrical Spell With Its Splendid GODSPELL 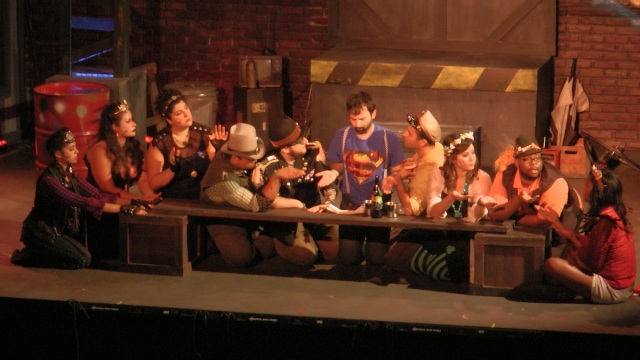 In the last dozen years I have had the opportunity to review several productions of the ever-popular musical, Godspell, conceived by John-Michael Tebelak with music & lyrics by Stephen Schwartz. Last Friday night I had the chance to sample a wealth of talent probably too little known here in Rockaway as I attended the Rockaway Theatre Company’s current fine production of that show at the Post Theatre. Presented in partnership with the Gateway National Recreation Area, the production validated a theory presented by the show’s director, Frank Caiati, when he wrote in his program notes: “…Godspell has never been done the same way twice.” I suspect that may even be true from performance to performance during the current run, which continues through this weekend. The director has entrusted his talented cast with an element of freewheeling creativity that is quite evident as the show unfolds in unexpected, yet delightful ways. Everything plays out on Caiati’s austere and rugged set design, looking much like an abandoned warehouse, and beautifully realized by Master Builder, Anthony Homsey and his talented crew of volunteers.

As readers may be aware, the musical is structured around the life and teachings of Jesus with a lighthearted, yet thought-provoking journey through the wisdom of many familiar parables from the New Testament. But fear not! It is not a proselytizing vehicle, but more a fun-filled reminder of values central to our common humanity without regard to any specific religion. If it does preach a bit, it is in a fashion that could probably fill our churches up in a way that some less interesting contemporary sermons are failing to do. Nevertheless, Godspell recognizes that religion is serious business, and that essentially divides the musical into the two very different parts of Act I and Act II. Let’s begin at the beginning.

Act One is light, gay and endearingly nutty with the funky-clad cast (costume designs by Matthew Smilardi) looking a bit like the Woodstock generation. Audience smiles come in rapid succession and laughter is abundant. This seemed a reflection of creative director, Caiati, whose own youthful smile and radiant energy seemed to light up the room as he mingled cheerfully with audience members during the intermission. That first act was also a total delight thanks to the universally excellent singing voices of the fine cast. While the beautifully performed role of Jesus (Mr. Smilardi) is clearly central to the work, the piece is very much an ensemble effort owing its success to fine performers including, Karen Mascolo, Chazmond “Chaz” Peacock, Renee Steadman, Michelle Ricciardi, Matt Leonen, Nicole Mangano, Jackie Samaha and Stephen Ryan. Rounding out the cast is John Panepinto in the challenging dual role as both Judas & John the Baptist.

All things considered, I would rate the fine ensemble, with its joyous esprit de corps, as the real star of the show in crowning the success of the numerous show stopping numbers nicely complemented by Musical Director, Jeffrey Arzberger, leading the fine 6-member band. Examples of those songs would include the full company’s opener, “Tower of Babel,” and then with the dramatic sounding of the shofar horn, the beautifully staged “Prepare Ye” scene for John the Baptist and the baptism of Jesus amid dramatically flowing water. Smilardi follows with tenderness as Jesus sings the warm and embracing, “Save the People,” while this joyous cast of flower children merrily surrounds him. Miss Samaha’s pure voice anchors the show’s biggest hit, “Day by Day,” as it explodes with whirling joy and gentle but effective choreography. (Choreographer, Gabrielle Mangano)

Musical numbers are interspersed with humorous sketches (some drawing in unsuspecting audience members) that are delightful reminders of such parable lessons as, “Love thy neighbor,” & “Give charity to those who ask of you,” and there is a clever spoof of “The Good Samaritan,” story that plays out like the winner of a beauty pageant with Miss Steadman showing riotous comic flair in accepting her award. A later Prodigal Son sketch was hilariously staged in mock slow motion to the theme from “Chariots of Fire.”

Amid soft pastel lighting and candle glow, (Lighting Designs, Andrew Woodbridge) Miss Mascolo leads the cast in a thrilling, “Learn Your Lessons Well,” that looked like a finale. Miss Mangano followed with a bright and perky, “Bless the Lord,” wrapped in more rich choral splendor from the ribbon dance whirling of the cast. Raising the bar of excellence even higher was the pairing of Panepinto and Smilardi for the brilliant counterpoints and snappy percussion of a glowing “All For the Best,” that looked like it had been staged by Bob Fosse. The rich voice of Mr. Peacock would soar for, “All Good Gifts,” and be enriched by the intimacy and gentle sweetness of the same ensemble that, moments later, would join Smilardi for the radiant, “Light of the World,” that brilliantly closes Act One.

Act Two would feature such highlights as the sensuous, “Turn Back Oh Man,” from Miss Steadman, the more somber and reflective, “By My Side,” from Miss Ricciardi, and a high energy, “We Beseech Thee,” from Mr. Ryan & company with dancing that seemed right out of ancient Egypt. It is worth noting however, that Act Two is overshadowed by the more serious approach of the crucifixion of Christ, with a corresponding drop-off of the merriment that pervades Act One. With that in mind, readers may want to try and obtain one of the few remaining tickets for the final performances listed below.

Rockaway Theatre Company’s GODSPELL continues through Sunday September 28th at The Post Theatre, Building T4, Fort Tilden, Rockaway, NY. Tickets are $20 for adults and $15 for Students & Seniors. Performances will be at 8 pm this Friday & Saturday with the final performance of a 2 pm matinee this Sunday. The Friday Performance will benefit the Alzheimers Association.

David Dow Bentley III, writes columns about the performing arts which are featured in newspapers from the East Coast to the Gulf Coast. A member of the American Theatre Critics Association (ATCA), The International Theatre Critics Association, and America's oldest theatrical club, The Lambs, he also had long service as the editor of The Lambs' Script magazine. Mr. Bentley may be contacted via e-mail at ThePeoplesCritic3@gmail.com.
View all posts by The People's Critic →
This entry was posted in Broadway, BroadwayStars.com, Gateway National Recreation Area, GODSPELL, Post Theater, Rockaway Theatre Company, Theater Reviews, ThePeoplesCritic.com and tagged Broadway, Gateway National Recreation Area, GODSPELL, musicals, Post Theater, Rockaway Theatre Company. Bookmark the permalink.