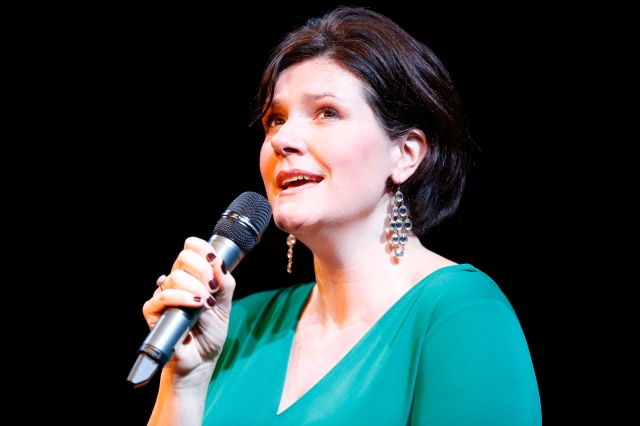 An end-of-year musical treasure I discovered this past weekend is Beware of Young Girls: Kate Dimbleby Sings the Dory Previn Story, now playing at 59E59 Theaters. Created and performed by Kate Dimbleby, written with Amy Rosenthal, and directed by Cal McCrystal, this fascinating musical journey is the story of the woman who has been called, “Queen of the 1970’s confessional songwriters.” While Dory was less well known than her prolific composer husband, Andre Previn, if hers was a contemporary story of our own day, it would undoubtedly be splashed across the tabloids and featured on Entertainment Tonight with all the lurid details of Andre leaving her for the much younger, Mia Farrow. Perhaps that betrayal was an important source for what would become Dory Previn’s own impressive songbook full of heartbreak and longing in tunes that would be picked up by such stars as Doris Day, Frank Sinatra, Rosemary Clooney and Tony Bennett.

With sparkling eyes and a confident air, she was at once a gently compelling storyteller. As she narrates the tale of Miss Previn, her crisp and clear enunciation was reminiscent of Julie Andrews. We learn of Dory’s sometimes-distant father in the song, “My Daddy Says I Ain’t His Child”, but he later encouraged his child star’s efforts in dance and song. We see ambition take hold with the song, “You’re Gonna Hear From Me.” Soon young Dory’s knack for song writing lands her in Hollywood. There’s an early look at her dark side in the black comedy of the song, “Mary C. Brown and the Hollywood Sign.” It was based on the true story of a troubled girl who committed suicide by jumping to her death from the famous landmark. Reflecting on the sign with disillusionment, the song spoofs that Hollywood welcome with a parody of Emma Lazarus’ words on the Statue of Liberty using lyrics like, “ Give me your poor and maladjusted…your black-listed…” etc.

At that point Dory’s husband-to-be, composer Andre Previn, enters her life as we hear the song of her enchantment, “Perfect Man.” But the tune ends, as does the marriage, with Dory’s discovery that he has “…feet of clay.” Those feet soon wander to the arms of actress, Mia Farrow, leaving the schizophrenic Dory with more reasons to be troubled in the title tune, “Beware of Young Girls.” Dory collaborates with her husband on the score for the film, Valley of the Dolls, but her jealousy and resentment of Mia are clear as she thinks to herself, “…she would never have to raise her tone to get what she wanted.” Finally Dory says “yes” to divorce, but “no” to further collaboration with Andre. Her subsequently schizophrenic episodes, like being removed from a commercial airliner, are neatly summarized in the screaming frenzy of the, “Twenty Mile Zone.”

As Act II opens, the star is provocatively gowned in lush emerald green chiffon. We begin to learn of Dory’s childhood mistreatment in school by nuns who forced her to abandon her natural left-handedness. Clearly, that is perceived to be an important source of Dory’s identity confusion. Unsympathetic Catholic priests cause her to leave the faith, and perhaps inspired Dory’s daring song, “Did Jesus Have a Baby Sister?”

Dory later connects with a young producer named Nick, but even he has a tendency to wander toward Hollywood blondes as we learn in the haunting song, “Lemon Haired Ladies.” It must be mentioned that an ever-present highlight of the production is the elegantly delicate, but never intrusive piano accompaniment of Naadia Sheriff. Miss Sheriff also enhances various numbers with gentle vocal support, as when she duets superbly during Dory’s ironic ruminations about men in the tune, “Angels and Devils.”

Throughout the performance, related slide projections appear high on the back wall, and before  the show ends there are more songs and biographical details for those lucky enough to attend remaining performances. Dory settles in the Hudson Valley with final husband, artist Joby Baker. But the frantic pace of her life has one last hurrah as the audience finds itself joining the hand-clapping reprise of, “Twenty Mile Zone.” Speed your way to the theater for this fascinating gem.

2 Responses to Beware of Missing THE DORY PREVIN STORY