Crighton Players Offer Laughter That “You Can Take With You”

I’m not much a one for making categorical statements, but let me make an exception. I’m prepared to state categorically that in fifteen years of reviewing local productions I have never laughed as hard in Conroe as I did last weekend when attending the Crighton Players’ performance of You Can’t Take It With You at the Owen Theatre. This hilarious production of the classic Moss Hart & George S. Kaufman comedy was so brilliantly directed by Jim Walker and so flawlessly and comically performed by the large cast of nineteen actors, it left me repeatedly gasping for breath as I roared with laughter. It is safe to say I was not alone in that audience. This show crackles with wit and is really FUNNY with a capital ‘F!’

The charming 1930’s set design and period costumes of Marieda Kilgore beautifully captured the cozy atmosphere of a middle class home of the late depression era, and assorted Big Band selections from the period add to the atmosphere. Soon the set would be filled with the zaniest collection of wacky characters that one could hope for. 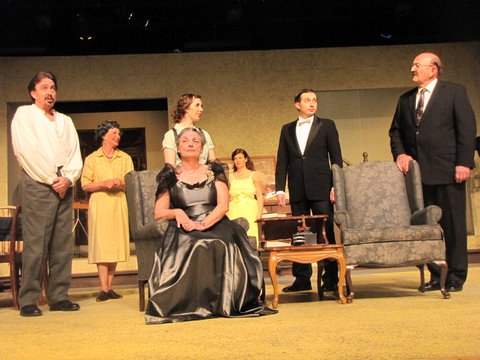 How Kaufman & Hart ever dreamed up such a set of oddballs is one of the sweet mysteries of the theatrical ages. But thank goodness they did! Take for example the role of mother, Penelope Sycamore (a riotous performance from Marilyn Moore, reminding one of a kind of cross between actresses Estelle Winwood and Jean Stapleton).

Oblivious to most of the nutty things going on around her, and with titles that keep changing, she is endlessly pecking away at her typewriter (it was delivered to the house by mistake) creating what she thinks is the next great American play. Her husband Paul Sycamore (Roger Ormiston) keeps busy in the basement experimenting with new formulas for the manufacturer of fireworks with bumbling help from his assistant, Mr. DePinna (Katt Gilcrease).

These gents do more than their share to keep things wacky.

Meanwhile the Sycamore’s flighty daughter Essie (Critsy Campobella), has been studying ballet with a thoroughly zany Russian teacher named Boris Kolenkhov (Rick Sellers) who escaped to America before the Russian Revolution and worries constantly about Russian politics. According to Boris, Essie is a poor ballet prospect, but at all times she dances endlessly around the house. Her husband, Ed (Mike Ragan) is goofy too, as he spends most of his time at home playing Für Elise and Pomp & Circumstanceon the xylophone, or using his typeset machine to print up little messages for inclusion in boxes of Essie’s homemade “Love Dream” candies that they have for sale. In the role of Grandpa Vanderhof (Penelope’s father), Quint Bishop turns in a solid performance as the eccentric old man who long ago decided to quit the business world and concentrate on doing only the things he enjoys, like throwing darts, attending commencements, and collecting stamps. Oh, by the way, he doesn’t believe in paying taxes and never has.

That brought a few cheers from the audience in this election year, but Grandpa has to face the music when stern IRS investigator, Mr. Henderson (Joe Witcraft) arrives at the house. 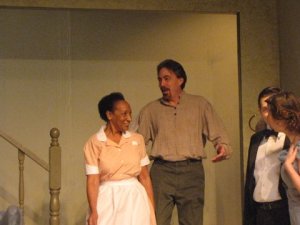 Dee Hughes gives us a terrific performance as the family maid, Rheba, and if she had starred in the recent popular film, “The Help,” she might have won an Academy Award! Jose Arrambide adds to the fun in the role of Rheba’s boyfriend, Donald.

Balancing all this nonsense from crazy characters we have the normal side of things in the person of the Sycamore’s other daughter, sweet Alice Sycamore, in a darling and oh-so-natural performance from lovely Natalie Hernandez. Adding to the charm of her portrayal is that of Alice’s equally charming fiancée, her Wall Street boss’s son and wealthy man about town, Tony Kirby (handsome Bob Townsend with slicked down hair of the period making him look a bit like a good-looking version of Pee Wee Herman). 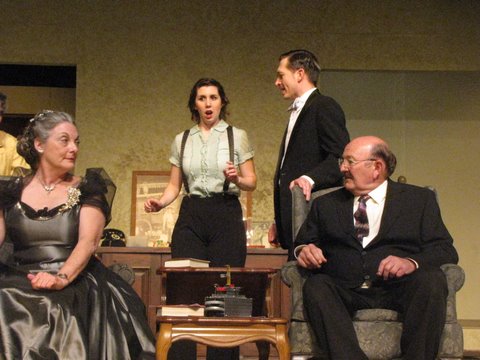 The two are delightfully sweet together as they confront a problem that brings the plot to a hilarious peak: It is time for Alice to have Tony’s mom and dad over for dinner so they can meet her crazy family. You won’t want to miss what happens then. Tony’s parents, Mr. & Mrs. Kirby, are nicely played by a grand and haughty Terry Lynn Hale (dig that lovely formal gown!), with John Adair in a great turn as her overworked husband, head of his own Wall Street firm. When they arrive in formal attire (and on the wrongnight) for dinner at the Sycamore home, dare I say that all hell breaks loose?

Hoping to have her read her new play, Penelope has brought home a drunken actress named Gay Wellington (Carol Haley) that she met on a bus. Meanwhile the IRS agents (Dan Tippen, Jim Murph and Derwin Youngblood) descend on the house and arrest everyone. I won’t tell you how, but everything ends well, and before long yet another nutty character, the ex-Grand Duchess of Russia, Olga Katrina (Susan K. Morrow) is serving everyone delicious blintzes in celebration.

One final warning: Allow a few days for your laugh muscles to recover!

YOU CAN’T TAKE IT WITH YOU continues through March 25th with performances Fridays and Saturdays at 8 pm and Sunday matinees at 2 pm. For tickets & information call 936-539-4090 or visit the website at www.owentheatre.com

David Dow Bentley III, writes columns about the performing arts which are featured in newspapers from the East Coast to the Gulf Coast. A member of the American Theatre Critics Association (ATCA), The International Theatre Critics Association, and America's oldest theatrical club, The Lambs, he also had long service as the editor of The Lambs' Script magazine. Mr. Bentley may be contacted via e-mail at ThePeoplesCritic3@gmail.com.
View all posts by The People's Critic →
This entry was posted in Broadway, BroadwayStars.com, Miscellaneous Reviews, The Courier Columns, Theater Reviews, ThePeoplesCritic.com and tagged Broadway, comedy, Conroe, Crighton Players, Entertainment, Owen Theatre, plays, Reviews, Texas, theatre. Bookmark the permalink.