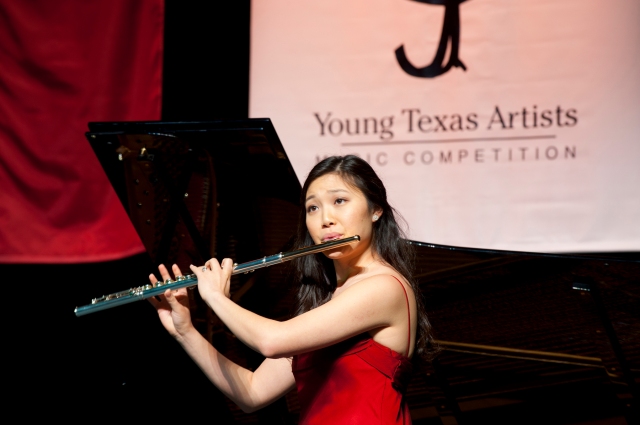 It was a very special night for the Young Texas Artists Music Competition, and long in the planning by the Montgomery County Performing Arts Society. Perhaps in a perfect world the weather last Saturday night might have been perfect as well. But the heavy rains did not frighten YTA Committee Chair, Susie Pokorski, who even managed attendance at a family wedding on the same day. What a trouper! But when all was said and done, it was the music and not the weather that took center stage at the Crighton Theatre for the 2012 edition of the annual Entergy Finalists Concert and Awards. This year’s event began in a special way with a pre-concert fund raising dinner under a grand tented pavilion erected directly in front of the theater on North Main Street. With a real Texas theme of Bach, Beethoven & Barbecue, and hard-working Shirley and Lee Pruitt serving as co-chairs, the dinner featured not only tasty barbecue with all the trimmings, but also a hot “baked potato casserole” that was as delicious as it was unusual. Texans Barbecue and Catering in Willis supplied the fine food, and of course there was plenty of wine and beer on hand for the guests to wash it all down while Lyn Howard led a lively auction. An added bonus found my guest and I seated for dinner with the always fascinating columnist, Peggie Miller, Montgomery County’s real voice of the performing arts.

Then it was on to the excitement of the YTA final competition in the elegant Crighton Theatre. 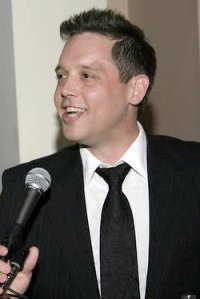 Cellist, Lachezar Kostov, was the first contestant as he offered a tour de force performance of Prokofiev’s Sinfonia Concertante for Cello & Orchestra. With his straight hair flying about his head, his impressive virtuosity produced rich tones, humorous variations, and an extraordinary finale of great technical difficulty. He was rewarded with the Silver Medal in the Strings Division. Dressed in an elegant tuxedo, and exhibiting considerable comic flair, baritone, Noel Bouley, brought a lusty and resounding voice and a bit of devilish glee to his fine performance of Mozart’s “Madamina! Il catalogo e questo,” and was rewarded with the Silver Medal in the Voice category. Matthew Moore dazzled the audience with a stunning marimba performance of Kevin Bobo’s, “Uphill Downhill,” that created a spider web of gentle mystery, as he seemed to fly up and down the instrument creating rich and haunting tones. His reward would be the Silver Medal for the Winds, Brass, Percussion, Harp and Guitar Division.

Dazzling as well was the performance of Chopin’s Piano Concerto No.2 in f minor by Hui-Shan Chin. In a lush burgundy gown, and with slender arms full of power, she offered a focused intensity, stunning control, and seemingly effortless delicacy of touch with hands that appeared to race one another across the keys. Even her pauses were of such perfection they offered music of their own. She would capture the Silver Medal in the Piano category.

The Gold Medals would go to four very worthy artists. In the Voice category the winner was baritone, James D. Rodriquez, for his amusing, thoughtful and theatrical performance of Rossini’s tongue-twisting “Medaglie incomparabile” from Il Viaggio a Reims. In the Winds, Brass, Percussion, Harp and Guitar Division top winner was flutist, Gina Choi. Dressed in a sleek ruby-colored gown, she performed Carl Nielsen’s Concerto for Flute and Orchestra, bringing playful virtuosity to the frequent mood changes of the piece with one moment full of longing and the next full of enchantment. In the Piano Division, Wanting Zhou captured gold performing the final movement of Beethoven’s Piano Concerto No.5 (“The Emperor”). Elegant with long black hair and long black gown, her dazzling fingering was wondrous and her majestic performance displayed an intimacy that made her seem one with the instrument. The audience was suitably impressed and also voted her the Audience Choice Award, which affords her an invitation to perform with the Conroe Symphony Orchestra. 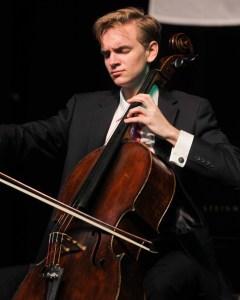 Gold winner in the Strings Division would be cellist, Coleman Itzkoff, for a performance of Elgar’s Concerto in E minor that exhibited pensive intensity, romantic flair, and a proud sense of passion that clearly reached both his fingers and the strings. His success continued when the judges announced his selection as Grand Prize winner in the competition.

An after-party of coffee, dessert and champagne awaited the many guests participating in the pavilion gala. There, along with my guest Kelli Estes, founder of Houston’s annual Lonestar Lyric Theater Festival (www.lonestarlyric.org), it was an added treat to chat at length with the evening’s animated host, Chris Johnson.

At one time a violinist with The  Woodlands Symphony, he amused us with tales of his own failed attempt as a YTA contestant years ago. Better still, when we all headed home, it had stopped raining.

[ For further information about the Young Texas Artists Competition, visit the website at www.YTAMC.com . ]

David Dow Bentley III, writes columns about the performing arts which are featured in newspapers from the East Coast to the Gulf Coast. A member of the American Theatre Critics Association (ATCA), The International Theatre Critics Association, and America's oldest theatrical club, The Lambs, he also had long service as the editor of The Lambs' Script magazine. Mr. Bentley may be contacted via e-mail at ThePeoplesCritic3@gmail.com.
View all posts by The People's Critic →
This entry was posted in BroadwayStars.com, Concert Reviews, Miscellaneous Reviews, The Courier Columns, ThePeoplesCritic.com and tagged classical, concerts, Conroe, contests, Crighton Theatre, Entertainment, Houston, Montgomer County Performing Arts Society, music, Reviews, Texas, Young Texas Artists Music Competition. Bookmark the permalink.