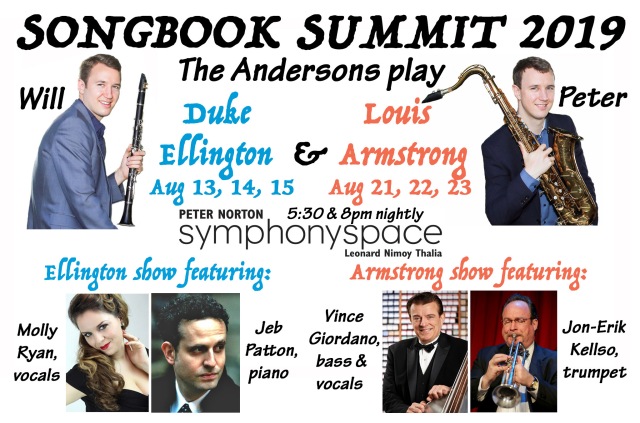 It seems to be becoming an annual musical celebration of the end summer as brilliant jazz musicians, Peter and Will Anderson, hold forth at the Leonard Nimoy Thalia Theatre in Manhattan’s Symphony Space on Broadway for yet another sensational concert in their increasingly popular SONGBOOK SUMMIT series. Last season’s sophisticated offerings featured musical tributes to Jerome Kern, Hoagy Carmichael, Jimmy VanHeusen, and Irving Berlin.

This year fans were treated first to the music of Duke Ellington, and then I had the good fortune to attend Opening Night of their final offering, a concert celebrating the musical legacy of Louis “Satchmo” Armstrong. I use the term concert rather loosely here, because in reality, the programs put together by these gifted identical twins are really educational musical seminars of the first order.

While Will may be best known for his dazzling skill on clarinet, and Peter for equally brilliant work on saxophone, the multi-talented lads move freely between various instruments during the performance.

On this occasion they were handsomely supported by guest star, Vince Giordano, performing on string bass, saxophone, bass, and tuba, with solid vocals on the side. Real New Yorkers are familiar with Giordano and his fabulous Nighthawks Big Band performing regularly at the Iguana Nightclub. Another special guest for this concert was sensational trumpet player, Mike Davis, substituting for the scheduled Jon-Erik Kellso at the performance I attended. Rounding out this solid cast of fine musicians were Rosanno Sportiello on piano and Paul Wells on drums. The talented ensemble quickly had the party well underway before the twins joined them onstage to display astonishing dexterity on sax and clarinet for the lively fun of Muskrat Ramble. Carefully planned and researched projections of related photographs, quotations and video clips nicely accented the musical performances. There was even a sprinkling of the witty theatrical drawings of Al Hirschfeld (like the one of Armstrong above), made available by special permission of the Hirschfeld Foundation. As the musical history lesson unfolds, the audience is taken back to Armstrong’s jail time as a young man, his early work with the Riverboat Band when being mentored by King Oliver in 1918, and then on to the Roaring Twenties days of Armstrong’s Hot Five Band. New Orleans flavors abound as we are treated to the delicious funereal seriousness of the tune, Saint James Infirmary. Vince seems almost airborne as he bounces with his tuba, Rosanno sparkles on the eighty-eight and the twins pair perfectly, as Mr. Wells nicely decorates every number on the drums. Armstrong quotes like, “If it hadn’t been for jazz there would be no Rock-n-Roll,” and “What is jazz? If you have to ask you’ll never know,” punctuate the projections. And speaking of jazz, Armstrong’s affinity for occasional scat singing was traced back to the famed 1930’s trio, the Boswell Sisters. There was more fun with an assortment of amusing vintage TV advertisements that featured Armstrong touting everything from Schaefer Beer to Suzy Cute baby dolls. Antique clips of Armstrong appearances at the Hollywood Bowl and on What’s My Line added to the merriment. There was a poignant story of how, as a young boy, Armstrong was nurtured and encouraged by the Karnofsky’s, a family of Jewish immigrants. They reportedly loaned him five dollars for his first coronet, and for all their kindness, Armstrong wore a Jewish star around his neck for the rest of his life.

Will and Peter Anderson

But back to the fine music, Mr. Davis then came onstage, trumpet in hand, to blow the roof off the room for Struttin’ with Some Barbeque. That tune was written by Armstrong and his wife Lil Hardin, and here it becomes a tour-de-force from the ensemble with bright piano accents, and a sassy vocal from Giordano. Next, the West End Blues has the audience longing to get up and dance, with Davis hotter than ever on trumpet as the twins blend in perfectly with sax and clarinet, while Giordano continues to shine on tuba. Soon the Andersons would have their fingers dancing across their instruments for Fats Waller’s Ain’t Misbehavin’, during another cheerful vocal from Vince. This historical and wide-ranging musical saga continued as it touched on Armstrong’s more than 30 film appearances, his navigation of the troubled waters of the Civil Rights Movement, and amusing anecdotes like the time President Nixon helped Armstrong at an airport as he unwittingly carried Satchmo’s luggage (containing 3 pounds of marijuana) through customs. The great tunes rolled on one after another with such gems as the rousing Someday (You’ll Be Sorry), a lazy and intoxicating When It’s Sleepy Time Down South, and of course Armstrong’s Grammy-winning hit, “Hello Dolly,” that drove The Beatles out of Billboard’s #1 slot. Through all of this, and the abundant music that followed, the Anderson Twins had the special glow of two gentlemen enjoying the fun of fulfilling their special destiny in just the way God must have attended. How fortunate for those of us in attendance.