It’s hard to believe that STAGE RIGHT PRODUCTIONS has just completed its first decade as the resident company in Montgomery County’s crown jewel, the historic and beautiful Crighton Theatre. But if the current production opening the 11th season is any indication, the next ten years look to be a rollicking good time. The play in question is the uproarious comedy, “The Savannah Sipping Society”, by Jessie Jones, Nicholas Hope, & Jamie Wooten.

I confess to a bit of suspicion when Director, Dinah Mahlman, stepped on stage before the curtain with a few words of introduction that promised “a laugh a minute.” Let me tell you, she was not kidding. This show is both adorable and HILARIOUS right out of the gate! I was originally scheduled to review it on its opening weekend, but my flight from New York made that impossible, so I attended last Saturday night. Since this gentle comedy for just four players was not one of Stage Right’s blockbuster musicals with a cast of thousands, I anticipated a moderate-sized audience. WRONG! The house was packed from wall to wall, and without benefit of the kind words I will share with you here. After seeing the show, I realized the crowd must have resulted from not only local media coverage, but perhaps moreover, from an explosive word-of-mouth campaign from delighted audience members who laughed themselves silly the week before. I don’t ever remember laughing that hard for that long at the Crighton, and on the way home in the car afterward, my guest was calling all her girlfriends to urge their future attendance.

What makes all this fun possible? To begin with, we have a cute plot revolving around three mid-life crisis gals who happen to meet at a yoga class that will have you howling. Each has personal issues she is trying to work through, but don’t be frightened off guys. The men in the audience were laughing just as hard as the ladies. 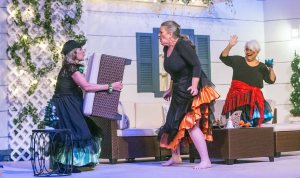 First we have Randa (a beaming Carolyn Corsano Wong, who brightens any stage). Company downsizing has found Randa abruptly fired from a job she loved in the business world, and replaced by a “3o year-old twit who wears bow ties!” Then there’s Dot (Martha Davis), who’s still struggling to come to grips with the death of the husband she had been planning a happy retirement with. She takes some consolation in the fact that, “He has now reached his ideal weight. 4 pounds including the urn!” She goes a step further cautioning the other girls that, “The shivering feeling you get when falling in love is just common sense leaving your body.” Finally we have the bitter, sassy and rowdy, Marlafaye (Lisa Shofield), who’s in a vengeful mood since her husband ran off with a twenty-something dental assistant. Marlafaye’s been suspicious ever since her husband began flossing between meals, and she contemptibly refers to her challenger as, “Little Miss Rinse and Spit.” Tying these characters all together is the arrival of a feisty new gal in town named Jinx (Cheryl Campbell). The real fun gets going when Randa has them all over to her home for cocktails on her lovely patio. (Set Designer, Melissa Cummins, — and if you like the wicker porch furniture you may have the chance to win it by buying a raffle ticket at Intermission). Jinx seems to sense the personal struggles revealed by the others as the wine flows and the very witty script gets rolling. She offers her services as a Life Coach to help her new friends move forward with life. Of course Jinx has had some issues of her own and shares that, “One guy I dated said I never listened to him. At least I think that’s what he said.”

In addition to the abundant crackling wit, the show sports an eclectic and pleasing costume collection ranging from flamenco dresses to hilarious medieval Renaissance Festival garb. (Designer, Debbie LaRue). There is also use of an effective theatrical device supplying more laughs, when during each scene break, one of the characters steps forward into the spotlight and addresses the audience directly. 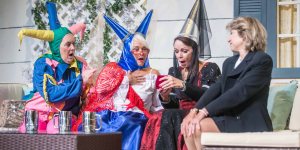 Summing up, these four actresses give remarkable performances that speak very well of the crisp direction from Ms. Mahlman. If there’s one minor problem worth mentioning, the audience laughter is sometimes so uproarious it may drown out the next joke. But in addition to the wit, the play offers occasional bits of wisdom. A couple I recall: “The older you are, the harder it is to jump start a new life,” and how about this one? “It’s been said that the more you complain, the longer you live.” I’m reasonably certain no one will be complaining after attending this show. 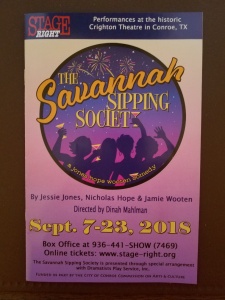 THE SAVANNAH SIPPING SOCIETY continues thru September 23rd at Conroe’s Crighton Theatre, 234 N. Main. Performances are 8pm Friday & Saturday, with a Sunday matinee at 2pm. For tickets and information call (936) 441-7469 or visit the website at www.stage-right.org/.

David Dow Bentley III, writes columns about the performing arts which are featured in newspapers from the East Coast to the Gulf Coast. A member of the American Theatre Critics Association (ATCA), The International Theatre Critics Association, and America's oldest theatrical club, The Lambs, he also had long service as the editor of The Lambs' Script magazine. Mr. Bentley may be contacted via e-mail at ThePeoplesCritic3@gmail.com.
View all posts by The People's Critic →
This entry was posted in BroadwayStars.com, Comedies, Crighton Theatre, The Courier Columns, ThePeoplesCritic.com and tagged comedy, Crighton Theatre, Jamie Wooten, Jessie Jones, Nicholas Hope, Stage Right Players, The Savannah Sipping Society. Bookmark the permalink.