Houston “…roads take me home…” to the Music Box 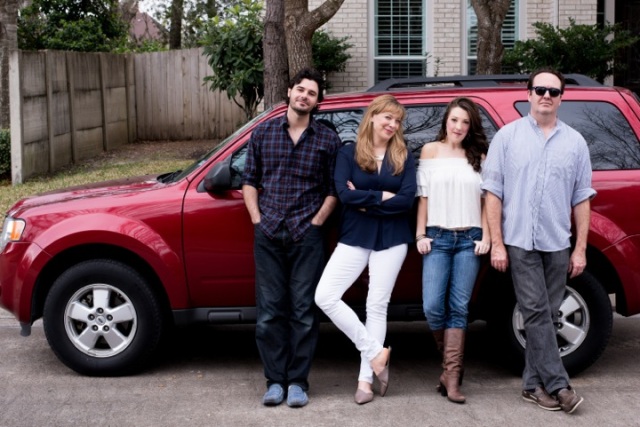 Yes, John Denver’s old country classic, “Country Roads,” is still buzzing around in my brain after last weekend’s pleasant opportunity to reacquaint myself with the popular Houston venue of the Music Box Theater. Now fast approaching recognition in the city’s “Top 25” favorite destinations at the popular Trip Advisor website, the increasingly popular nightclub is currently ranked #26 as it prepares to celebrate the club’s continuing success with a “Five Year Anniversary Show,” scheduled to begin next month from May 13-June 18. But no need to wait until then during the current run of the delightful show, “Travelsty,” a fun-filled romp chock full of popular songs selected to salute the upcoming summer travel season as the troupe reprises their 2012 show with the same theme. It was fun then and it’s fun now, with the added bonus that these four talented performers (Rebekah Dahl, Brad Scarborough, Kristina Sullivan and Luke Wrobel) seem even more polished, in both comedy and song, each time I see them. All four of the performers honed their sensational vocal skills during years as members of the memorable Masquerade Theatre at the Hobby Center.

The audience is told early on that the show will describe, “…the places we’ve been and the paths we took to get here.” As the cast delivers a rowdy and solid version of Bruce Springsteen’s, “Born to Run,” the show takes off like a rocket with great support from music director, Glenn Sharp, and his fine band. With the aid of two chairs and two stools, the gang creates the illusion of a crowded car for this amusing, musical cross-country trip. Rebekah laments the high cost of petrol saying, “Gas prices are higher than I was in the mid-nineties,” but they arrive safely at the first stop in Georgia where we hear the delights of, “Midnight Train to Georgia,” and the obligatory, “Georgia on My Mind.” As we move on to The Big Apple there is gentle fun depicting some loud-mouthed New Yorkers. But all is forgiven when Kristina launches into a beautiful, “New York State of Mind,” while under smoky red lighting, Rebekah weaves a sensational counterpoint with “Empire State of Mind.” Soon we find ourselves in Las Vegas as Luke provides a big, bold, Elvis-style, “Viva Las Vegas,” while his cast mates don feather boas to make a shabbily amusing chorus line. (“Downton Abbey” fans may be interested to know that Mr. Wrobel just completed several years as the droll butler, Mr. Rodgers, on the popular weekly PBS follow-up talk show, “Manor of Speaking.”)

Next, there’s a visit to Tennessee as Kristina carves out a lovely, “Walking in Memphis,” with a wistful conclusion. Summer beach lovers will enjoy a visit to the Coney Island Boardwalk as the group delivers a smoothly acapella, “Under the Boardwalk,” with gentle percussion accents from drummer, John Gremmion. Mr. Scarborough again displays his wide vocal range with his falsetto opening for the group’s mystical rendition of the mysterious Eagles hit, “Hotel California,” punctuated with some spooky slow motion strobe lighting. Kristina returns to guide the group for a sweetly mellow quartet of John Denver’s “Rocky Mountain High,” and a joyful version of the aforementioned, “Country Roads.”

Wrobel opens Part Two of the program singing a, “Where the Streets Have No Name,” that is full of desperation. Then the devilishly good-looking Scarborough brings smooth naturalness and sassy country flavor to the tune, “Take it Easy,” before Kristina accompanies herself on harpsichord for a pleasant, “Leaving on a Jet Plane,” featuring fine banjo work from Long Le in the band. As the action moves to New Orleans, Rebekah brings some snappy sparkle to, “Hey, Lord!” and her husband, Brad, follows with dazzling vocal transitions during, “House of the Rising Sun.” Kristina winds up that segment with a wonderful, “Basin Street Blues,” as Luke adds a bit of Satchmo-style scat singing. Then it’s off to San Francisco, Detroit and of course a final return to Houston. If you’re in town, why not come see for yourself?

TRAVELSTY continues at the Music Box Theater, 2623 Colquitt-Houston, Texas through May 7th with performances Fridays and Saturdays at 7:30 pm. Reserved seating is $37 and General Admission is $27. For tickets and information call (713) 522-7722 or visit the website at www.themusicboxtheater.com.

David Dow Bentley III, writes columns about the performing arts which are featured in newspapers from the East Coast to the Gulf Coast. A member of the American Theatre Critics Association (ATCA), The International Theatre Critics Association, and America's oldest theatrical club, The Lambs, he also had long service as the editor of The Lambs' Script magazine. Mr. Bentley may be contacted via e-mail at ThePeoplesCritic3@gmail.com.
View all posts by The People's Critic →
This entry was posted in BroadwayStars.com, Music Box Theater, The Courier Columns, YourHoustonNews.com and tagged Cabaret, clubs, comedy, Houston, Music Box Theater, nightclubs. Bookmark the permalink.