Cheerful ALICE is a Mixed Bag at Texas Rep 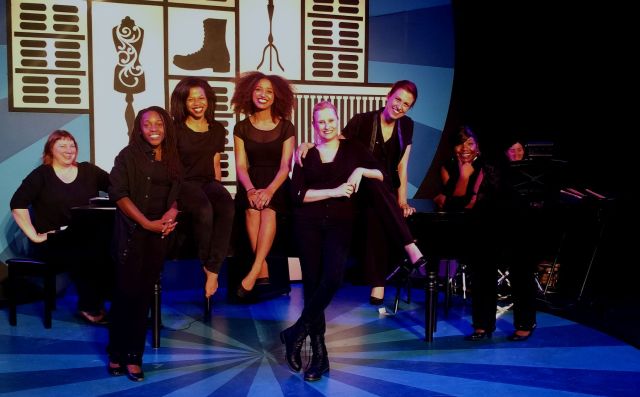 I always enjoy it when my trips to Texas coincide with scheduled productions of the Texas Repertory Theatre. The company’s current cheerful offering of Joan Micklin Silver & Julianne Boyd’s 1983 musical revue, A, MY NAME IS ALICE, while not without occasional flaws, has plenty of abundant delights as well. Ably directed here by Troy Scheid, the show boasts a bubbly cast of five talented and energetic gals that includes, Agnes “Aggie B” Balka, Amy Garner Buchanan, Katie Harrison, Crystal Rae and Maryann Williams. Those looking for a pleasant evening of light entertainment may want to give ALICE some consideration.

Structurally, the show brings us about two dozen separate songs and/or sketches from a variety of composers such as David Zippel, Lucy Simon and Winnie Holzman, along with comedy writers like the late Anne Meara. Our five stars rotate in and out of the various numbers, beginning with the cute ensemble opener, “All-Girl Band,” which quickly leads this merry quintet to a recitation of the witty “A, My Name is Alice Poems,” that give the show its title. From that point on, a variety of song selections are sprinkled with short vignettes, some better than others. Balka and Williams launch things nicely with the song, “At My Age,” pairing an older woman (Balka) and a teenage girl, both of whom are trying to start a new phase in life as they prepare for special dates. The full cast joins the fun as Miss Harrison follows with a fine comedic performance as a gal so steeped in the lurid world of trashy dime-store novels that her daily life becomes a hilarious fantasy world of her own imagination during the song, “Trash.” Next we are treated to the first of three very funny “For Women Only” sketches with Miss Harrison portraying a hilariously avant-garde poetess who very dramatically recites her own pseudointellectual poems with such exaggerated physicality that the laughs just keep on coming.

Ms. Rae offers a bit of tap dancing for a segment titled, “Good Thing I Learned to Dance.” That point may be debatable, as the bit (also featuring Williams) never seemed to catch fire. (Choreographer, Lauren Dolk). More successful was the hilarity of, “Welcome to Kindergarten,” as Miss Balka gives us a riotously domineering classroom teacher who treats a visiting parent (Miss Buchanan) as though she were a child. (“Raise your hand before you speak,” “Sit up straight,” “Stop fidgeting!”) Plenty of laughs there. For a gentle change of pace we then have Miss Williams’ tender and sweet rendition of “I Sure Like the Boys.” The naturalness and warmth of her lovely voice and bright countenance all combined to make that number a real winner. One of the show’s other highlights arrived with Balka’s hilarious performance as “Ms. Mae,” an elderly black woman treating herself to a new hairdo at the beauty parlor. It’s a one-woman show as she chatters non-stop to her invisible stylist, while we in the audience roared with laughter. This gal should head over to “Saturday Night Live” and show those folks what funny is really all about! Terrific!

The gals join forces for the rambunctious but less successful, “Detroit Persons/ Educated Feet,” a send-up of women’s basketball teams. Buchanan’s performance of “Portrait,” is a sentimental reflection on the loss of a mother, and then Williams, Rae and Harrison close out Act One with a somewhat frantic competition trio of, ”Bluer Than You,” from three women, each of whom believes she has the toughest lot in life.

The Act Two opener, “Watching the Pretty Young Men,” with its counterpoint trio and rapid lyrics (Balka, Harrison & Rae) was an example of how some of the songs occasionally wandered into the inaudible zone in the absence of microphones, thus sacrificing some of the show’s inherent wit while a group of girlfriends ogle the guys in a male strip club. Then we move on to the straight dramatic as Miss Buchanan portrays a scorned woman breaking up with her man in “Demigod.” (“It will be easier if we can just hate each other openly,” and “I loved you, but I never said I liked you!”) Miss Harrison was next singing “Chanteuse Rosé” for one of the play’s cleverest sketches: French Monologue/French Song. It’s a nonsense song, simply constructed to include every familiar French word and phrase that would be familiar to all. Executed with great comic flair and physicality, it was hilarious by any measure. There was a passionate love song from Miss Rae with, “Pay Them No Mind,” and then Harrison returns with Williams for the merriment of “Hot Lunch,” as a passing woman being disrespected by a rude and whistling construction worker suddenly turns the tables on him.

When Balka sings, “Sisters,” we have a warm and thoughtful recollection of life’s journey. In the segment titled “Honeypot,” Miss Rae portrays Honeypot Watkins, a woman being counseled by a psychiatrist (Buchanan) regarding her sexual hang-ups. The sketch is full of devilish double-entendres like, “My door’s wide open. Why don’t you come inside?” It may remind old-timers of Ethel Waters’ classic 1928 recording, “My Handyman.” Best of all, Honeypot’s jazzy flapper dress with its golden highlights is the first and only interesting costume in a collection that consistently had the cast in drab black that often looked like rehearsal clothing. Use of color could have lifted the show’s visual impact considerably. (Costume designer, La Clevenson).

The closing number, “Friends,” was actually quite poignant as Harrison and Williams play two good friends who chat and gossip on the phone through various phases of their lives, from their teens to old age. In just a few minutes it provided a melancholy, yet touching, journey to the end of life. With continuing Musical Direction from pianist, Claudia Dyle, aided by Regina McCormick on percussion, the finale reprise of, “All-Girl Band,” lifts all spirits at the close. Why not stop by and see for yourself?

A, MY NAME IS ALICE continues through November 8th at Texas Repertory Theatre in the Northwoods Plaza, 14243 Stuebner Airline Rd., Houston, Texas. Performances Thursdays at 7:30 pm, Friday & Saturday at 8 pm, with Sunday matinees at 3 pm. For tickets and information on Senior and Student discounts, call 281-583-7573 or visit the website at www.TexasRepTheatre.org.

David Dow Bentley III, writes columns about the performing arts which are featured in newspapers from the East Coast to the Gulf Coast. A member of the American Theatre Critics Association (ATCA), The International Theatre Critics Association, and America's oldest theatrical club, The Lambs, he also had long service as the editor of The Lambs' Script magazine. Mr. Bentley may be contacted via e-mail at ThePeoplesCritic3@gmail.com.
View all posts by The People's Critic →
This entry was posted in A MY NAME IS ALICE, BroadwayStars.com, The Courier Columns, ThePeoplesCritic.com, YourHoustonNews.com and tagged comedy, Off Broadway, Texas Repertory Theatre. Bookmark the permalink.