Broadway and Rebekah Dahl Return to The Music Box 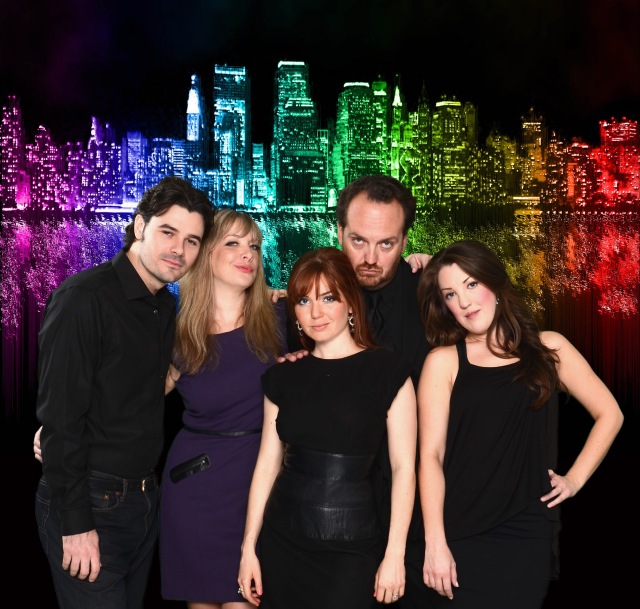 With so many of its stars having been polished by years of Broadway musical experience with Houston’s legendary Masquerade Theatre, it should come as no surprise that the current offering from The Music Box Theater would be themed, More Broadway At The Box. The nightclub’s ever-growing fan base knows to expect both great music and great comedy from this clever troupe of five players that includes Luke Wrobel, Cay Taylor, Kristina Sullivan and the husband and wife team of Brad Scarborough & Rebekah Dahl, founders of the trendy club. This is a special production because it celebrates the return of Dahl after a period of maternity leave following the birth of the couple’s son. With her wonderful voice and peerless flair for comedy, that return is surely cause for rejoicing.

For this edition Dahl is cast as the fictional Elizabeth “Betty” Bittermore, a somewhat jaded and aging diva of the Broadway stage who punctuates the cast’s many song offerings with juicy vocals of her own, while linking it all together as she dryly narrates the story of her life in the musical theatre with a sultry voice and demeanor that seems reminiscent of Lauren “Betty” Bacall. Dahl’s fellow actors sing along as they take on the assorted roles of the characters Miss Bittermore describes in her life story. Music Director, Glenn Sharp and his 5-piece band continue to serve up the fine accompaniment at The Box.

Luke Wrobel has the perfect opening number with a rousing “Lullaby of Broadway,” that soon evolves into a quintet from the cast. Fans of the popular PBS series, “Downton Abbey,” may have come across the follow-up Houston PBS talk show titled, “A Manor of Speaking.” In that show it is Mr. Wrobel who amusingly plays the part of Rogers, the butler.

Dahl gives us a soaring, “Don’t Cry For Me, Argentina,” and then as Bittermore’s story unfolds we learn she got her start in Detroit when music producer/songwriter, Barry Gordy, took that “little white girl,” under his Motown wing. Soon, Brad and Luke lead the gang in a funky, “I Heard It Through the Grapevine,” with dashes of amusing lightweight choreography. Miss Sullivan takes us to a much higher level in her lush performance of “Summertime.” With just elegantly gentle accompaniment on guitar, when she came to the words, “…spread your wings and take to the sky…” I felt nearly airborne myself.

The in-jokes abound as Bittermore continues the story of her career and tells of heading for New York even though, “I heard they had great cabaret in Houston, but that did not interest me.” Next Mr. Scarborough gave what may well have been the best rendition of West Side Story’s “Something’s Coming” that I have ever heard, and that led into a rhythmically wonderful, “Maria.” In his capable hands it was, as the song says, “…almost like praying.” Taylor and Sullivan combine forces for a lashing, “”Don’t Rain on My Parade. Sullivan follows with the Chorus Line hit, “Dance 10, Looks 3,” and Wrobel leads the gang in a solid, “Luck Be a Lady.” The spirit of fun is so abundant that I could not even take exception to the lampooning of theater critics with the inclusion of the song, “Loathing” in their honor.

After a pleasant intermission break (Don’t miss the available Cheese & Cracker plate with a cold beer or glass of house cabernet) the comic antics returned as Brad and Luke took on the roles of Roxie Hart and Velma Kelly in a jazzily exaggerated, “Nowadays,” from Chicago. Miss Taylor followed with a poignant and theatrical rendition of the song, “Nothing,” from A Chorus Line. The rich and thoughtful, “Old Man River,” from Mr. Wrobel was on a similar plane of excellence. Other second act treats include Dahl’s radiant, “What a Feeling,” and when she sings the tune, “I’m Here,” with compelling ferocity, we can’t help thinking we are glad that she is back here where she belongs. Then there is the late inning rapture of Sullivan’s, “My Man,” and a fine trio from the gals of “If We Never Said Goodbye.” There are more treats from Jesus Christ Superstar and Les Miserables, so head on over to The Music Box and see for yourself.

MORE BROADWAY AT THE BOX continues at the Music Box Theater through March 29th with performances Fridays and Saturdays at 8pm and a Sunday Matinee at 2pm on March 16th. For tickets and information call (713) 522-7722 or visit the website at www.themusicboxtheater.com.