It’s a Fine Life for “OLIVER!” at the Owen

I have often remarked of my regret that in 1963, as a budding freshman at the
University of Texas in Austin, I was not able to be with my sister in New York
when she attended the original Broadway run of Lionel Bart’s brilliant musical,
“Oliver!” based on the classic Dickens novel, “Oliver Twist.”   Since that time I have enjoyed several productions of the show, including the stunning 2008 Class Act
Productions offering in the Woodlands, Texas, and the 2006 Stratford Shakespeare Festival production that I attended in Canada with fellow members of The American
Theatre Critics Association. Then, of course, there was the Academy Award-winning 1968 film version that brought the musical’s joys to movie-lovers around the world. Now, right here in Montgomery County, the fun continues with a fine new stage production from the Crighton Players at the Owen Theatre in Conroe. 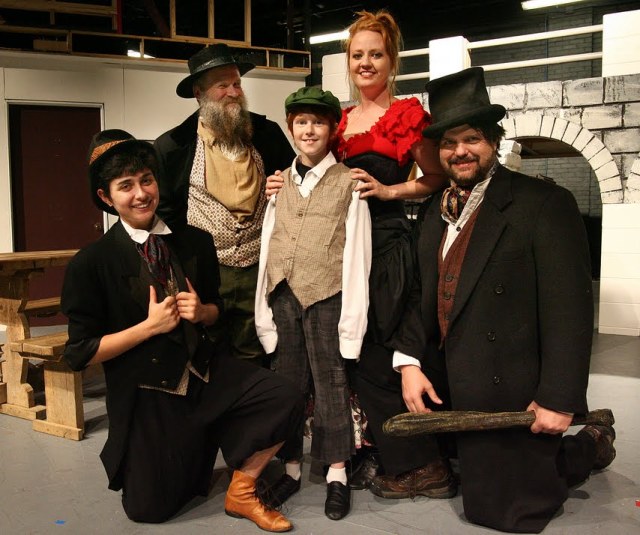 This latest incarnation, ably directed by Jeffrey L. Baldwin, is no small undertaking with
its enormous cast of 64 local actors, many of them children who do a terrific job in their roles as 19th century London workhouse orphans and street urchins. The action plays out on the authentic and versatile London town set design of Mr. Baldwin, with massive stone facades and Tudor-style stained glass windows. The beautiful period costumes of Sue McClelland Hayes add to that authenticity. Though apparently not credited in the very beautiful printed program, the orchestra was sequestered backstage and did a fine job while presumably not being able to see the action on the stage. Those musicians were
well-guided by Musical Director, Dave Englert, who was also missing from the program’s listed Production Staff, though his name did appear among the Cast Bios. I was particularly struck by the fine violin work that accompanied one of the show’s most sensational performances, the solo of “Reviewing the  Situation,” so brilliantly performed by B.B. von Billy in his role as the conniving old crook, Fagin, who specializes in training young boys to be thieves. His memorable performance in the show would have worked well on Broadway.

Many wonderful songs accompany Oliver on the twists and turns of his journey from the workhouse to brief employment with the undertaker (Adam Marrow as Mr. Sowberry, Terry Woods as Mrs. Sowberry), on to Fagin’s den of thieves, and ultimately to the fine home of kindly Mr. Brownlow (Don Hampton), and his sweet housekeeper, Mrs. Bedwin (Kristi Nicholson).

Beginning with the delightful opening number of “Food, Glorious Food,” from the orphans, there are countless wonderful tunes that include “I Shall Scream,” (hilariously delivered in a flirtatious duet from overseers of the orphans workhouse, Mr. Bumble, played by Greg Taylor, and a noticeably buxom Widow Corney, played by Brandi D. Baldwin), the plaintive, “Where is Love,” (sweetly delivered by our gifted young star, Brandon Brown, as Oliver), the cheerful and well-staged, “Consider Yourself,” (featuring the fine chorus accompanying both Mr. Brown and talented young
Elizabeth Quiroga in her fine performance as the Artful Dodger), the devilish,
“You’ve Got to Pick a Pocket or Two,” (from Fagin and his gang), the bright and optimistic, “It’s a Fine Life,” (from talented Jesse Cavazos as Nancy and lovely Rachel Ford as Bet), and the cast’s joyful, “I’d Do Anything,” near the end of Act One. Fagin’s crew guides us to the intermission with the mischievous, “Be Back Soon.”

More delights await us in the sometimes-disturbing plot of Act Two that begins merrily with the infectious, “Oom-Pah-Pah (from Nancy and the chorus), before we learn more of the evil intentions of Nancy’s brutal lover, Bill Sikes (Dane Bennett), as he sings the threatening, “My Name.” Nancy shows her love exceeds her common sense as she expresses loyalty to the abusive Sykes with the devotion of, “As Long As He Needs Me.” Another joyful highlight is the very wonderful, “Who Will Buy?” number from the large cast, which, like many of the songs in the show, was skillfully staged to bring the cast out into the auditorium. That technique was used to great effect in making a more intimate
connection with the audience. Dance Choreographer, Sherry Rozas, Combat Choreographer, Travis Bryant, and Dance Captains, Rachel Ford & Daniel Miller deserve credit for organizing so many movements so well.

One serious flaw in this production will, I hope, be resolved before my readers attend
future performances. The sound system malfunctioned repeatedly, and on numerous
occasions was a great distraction to both audience and performers. Body microphones crackled with static and speaker systems sometimes went in and out. The Crighton Players are reaching for excellence on so many levels, and in the opinion of this critic this issue must be a top priority for quick resolution. Thankfully the problems seemed to abate during a thrilling London Bridge scene near the end of the play that was quite well-staged with fine lighting (Chris Johnson), and an impressively misty London fog. I can’t give away the outcome. For that you will have to buy a ticket.

OLIVER! Continues through June 4th at the Owen Theatre, 225 Metcalf in Conroe, Texas, with performances Friday & Saturday evenings at 8 pm and 2 pm matinees on Sundays May 22nd and 29th. For tickets and information call 936-539-4090 or visit the website at www.crightonplayers.org .

David Dow Bentley III, writes columns about the performing arts which are featured in newspapers from the East Coast to the Gulf Coast. A member of the American Theatre Critics Association (ATCA), The International Theatre Critics Association, and America's oldest theatrical club, The Lambs, he also had long service as the editor of The Lambs' Script magazine. Mr. Bentley may be contacted via e-mail at ThePeoplesCritic3@gmail.com.
View all posts by The People's Critic →
This entry was posted in Miscellaneous Reviews, The Courier Columns, Theater Reviews and tagged Broadway, Conroe, Entertainment, Houston, music, musicals, Reviews, Texas, theatre. Bookmark the permalink.

2 Responses to It’s a Fine Life for “OLIVER!” at the Owen