Nothing Rotten in Crighton Players’ “Scoundrels”

It was the first Thursday night performance ever offered by the Crighton Players, and the packed-house audience at Conroe’s Owen Theatre seemed to appreciate the mid-week opportunity. Based on the film of the same name, the musical comedy being offered was “Dirty Rotten Scoundrels,” directed with comic flair by Travis Bryant, and with a book by Jeffrey Lane and Music & Lyrics by David Yazbek. The minimal set (designer Brandi D. Baldwin) efficiently suggested the casino location on the Riviera, and was always well lit by lighting designer, Chris Johnson. Elegantly dressed in formal attire, the fine 12-piece onstage band (music director, Dave Englert) was nicely arranged and ever visible at the back of the stage, lending a kind of ballroom atmosphere to the proceedings.  The 18-member ensemble cast of singers and dancers lights up the stage immediately, and we can see it will be a collective star of the show during the cute “Give Them What They Want” number.

The nutty and fun-filled plot surrounds two con artists who like to scam the rich women who frequent the casinos. Jeffrey Baldwin portrays the pompous crook, Lawrence Jameson, who is well practiced in the art of the con, and Chris Johnson is his very French right-hand man. 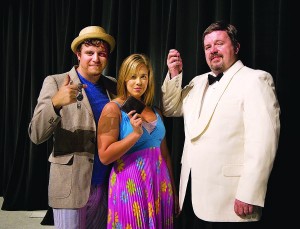 Addison Roush portrays Jameson’s hapless protégé, Freddy Benson, who longs to be as big a crook as he is. With one of the finest voices in the cast, Kimberly Bryant plays Muriel Eubanks and delivers a richly appealing, “What Was a Woman To Do,” as her first number.

If the show has a smooth takeoff, it really jets skyward when Roush hits the boards for the hilarious, “Great Big Stuff,” recounting all the things that cocky Freddy hopes to have if he is successful as a crook. Tipping its hat to both country and rap music, the song is a hoot, and Mr. Roush nails it as a highlight of the show. The biggest laugh of that song came as Freddy dreams that his hoped-for wealth will enable him to “…finally afford to live in The Woodlands.” That line must be changed to fit exclusive neighborhoods wherever the show plays. Jameson, of course, hesitates to take on the training of the lowly Freddy. Fans of “Pygmalion” and “My Fair Lady” got a laugh out of Jameson’s familiar speculation that Freddy might be a challenge to teach because “He’s so deliciously low, so horribly dirty!” Remind anyone of Eliza Doolittle?

Andre’s snooty French flair is on full display for the mockery he offers Freddy during “Chimp in a Suit,” with rhyming lines like, “Buy him a castle, he’ll still be an ass—–.” In the amusingly flighty role of Jolene Oakes, Andrea Arenales hits another winner with saucy country flair in the song, “Oklahoma?” (Maybe the inclusion of the question mark allowed the authors to get away with that Rogers & Hammerstein title). In square dance style, it featured fine whirling choreography (Heather Sanders), high-kicking and youthful energy, and some of the show’s many fine costume designs from Sue McClelland Hayes. Roush has another hilarious number in “All About Ruprech,” as the guys scheming requires Freddy to pose as Jameson’s idiot brother. It’s a laugh riot!

If not vocal perfection, beautiful and beaming Hilary Bryant (in the role of Christine) brings a joyous presence to “Here I Am,” and is joyfully supported by the ensemble. She joins Freddy for a song with the promising title of “Nothing is Too Wonderful,” but the lyric is weak in spite of the title’s good intentions.

By the time Act Two rolls around Freddy and Lawrence have made a wager as to which of them can more quickly con one of the ladies out of  $50,000. Freddy cleverly poses as a paraplegic to gain the sympathy of his victim. When Jameson learns of this he poses as Dr. Shüffhausen, the only doctor who can cure Freddy’s paralysis. That’s when the real hilarity begins. The scene is deliciously silly and Mr. Baldwin proves himself the ultimate “ham.” Another Act Two highlight is the extensive ballroom number, “The More We Dance,” with its lively and appealing Latin rhythms, beautiful costumes, and the elegant dancing of the ensemble cast. The exaggerated passion of “Love is My Legs,” though musically a bit harsh, was nevertheless a very funny comedy romp from Freddy, Christine and the company. A brief change of pace with the plaintive “Love Sneaks In” from Lawrence quickly returns to comedy with the hilarious “Reckoning” trio from Freddy, Lawrence & Andre.

An audience member from The Woodlands, Debbie Little, earned the last word when she summed up her impressions of the show as follows:

Scoundrels continues through September 4th with performances at Conroe’s Owen Theatre at 8 pm Fridays & Saturdays and a Sunday matinee at 2 pm on Sunday, August 29th.  Crighton Players continue their new season with the comedy, “Dearly Departed,” September 24th through October 23rd. For tickets and information call 936-539-4090 or visit the website at http://www.crightonplayers.org/.