(L-R) Robert Faber as Felix, Mandy Hall as Cecily, Sarah Wilkins as Gwendolyn, and John Barton as Oscar, in the Stage Right production of THE ODD COUPLE.

[PHOTOS BY: Michael Pittman. Click any photo to enlarge.]

Perhaps William Shakespeare was not predicting our approaching Texas pandemic winter storm when he wrote the line, “…Now is the winter of our discontent…” for Richard III in 1594. But who among us has not heard the phrase, “We’ll get through this!” during the harrowing past twelve months? Well maybe it’s true.

My friend Ruthellen and I just attended last weekend’s Opening Night of THE ODD COUPLE, at the hitherto long-darkened Crighton Theatre. Both the theater and this critic have been “out of business” for countless months, (along with the rest of the shuttered entertainment industry), while the nation and the world battled the insidious Covid19 virus. Haven’t we all now earned the right to a few laughs?

Well relief is now on the way, thanks to Stage Right Productions director, Melody Montez, and her courageous cast and crew for this classic Neil Simon comedy. I say “courageous,” because it is widely believed, in the world of theater, that comedy is the most difficult of the theatrical arts to do well. Gifts like subtlety, timing, comedic body language & facial expressions are not skills possessed by every actor. So right out of the box our community owes this company of local actors sincere gratitude for bravely taking on the work of many weeks of rehearsal and preparation aimed at putting the smiles back on our long-masked pandemic faces. Yes, masks are required when moving through the theater lobby and restroom areas, but not while sitting in your widely socially-distanced seat, with every other row kept empty, along with the block-off of seats immediately surrounding you and your party. This makes ordering your tickets early essential. Though this beautiful theater is capable of seating several hundred, it now has greatly reduced capacity due to required socially distanced seating. In addition to supporting this much needed renaissance of live theater, audiences will also have an opportunity to glimpse the ongoing expansion of the lobby/restroom/box office & concession areas that will greatly enhance the theater when completed.

For those who might be unfamiliar with The Odd Couple from the hilarious and long-running television series, the popular 1968 film version, or the original and successful run of the 1965 Broadway play, the amusing plot revolves around two guys surviving failed marriages, who end up sharing a Manhattan apartment. The boisterous Oscar Madison is played with rowdy gusto by John Barton. The always loud Oscar enjoys being a slob, eating snacks and playing poker.

But Oscar takes pity on his friend, Felix Unger, (Robert Faber), when the desolate fellow is tossed out of his home by a divorce-seeking wife. Though the now-homeless Felix is Oscar’s polar opposite, Oscar invites him to become his roommate in the smoky and disheveled apartment. (Pleasant set design by Barton & Ms. Montez). Timid and heart-broken over the failed marriage separating him from wife and children, Felix loves to cook, is a fastidious neat-freak who wants things tidy, and revels in cleaning up Oscar’s messes. 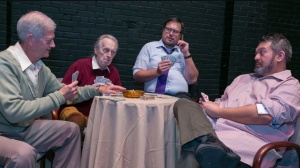 The guys’ ensuing clashes propel much of the comedy, along with able assistance from Oscar’s rowdy group of weekly poker players: Vinnie (Frank Pursel), Speed (Jeffery Ott), Roy (Bob Galley), and the ever-wise Murray (nicely played by John Kaiser). The comedy rises to an even higher level when Felix and Oscar invite the adorable upstairs neighbors, the Pigeon sisters, to come to dinner. (Mandy Hall as Cecily, and Sarah Wilkins as Gwendolyn.) With their cheerful British accents, the perky, pretty, and giggling sisters bring great fun to the proceedings.

They are a riot as they comfort the despairing Felix when the topic of his divorce brings him to tears. If you’ve found yourself despairing during this seemingly lost year of the pandemic, maybe this hard-working cast has just the comedic medicine you need. Ruthellen summed it up nicely as we left the theater: “Isn’t it nice to be getting back to normal?” 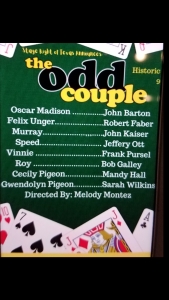 THE ODD COUPLE runs thru February 28th, with performances at 8 p.m. Fridays & Saturdays, and at 2 p.m. on Sundays, with one additional matinee on Saturday Feb. 27th. For tickets visit www.crightontheatre.org, or call 936-441-7469. The Crighton Theatre is located at 234 N. Main in downtown Conroe, Texas. [PLEASE NOTE: Seating will be extremely limited as the Crighton Theatre is observing all recommended COVID spacing / capacity restrictions, and patrons are requested to wear masks whenever not seated for the performance.]

David Dow Bentley III, writes columns about the performing arts which are featured in newspapers from the East Coast to the Gulf Coast. A member of the American Theatre Critics Association (ATCA), The International Theatre Critics Association, and America's oldest theatrical club, The Lambs, he also had long service as the editor of The Lambs' Script magazine. Mr. Bentley may be contacted via e-mail at ThePeoplesCritic3@gmail.com.
View all posts by The People's Critic →
This entry was posted in Broadway, BroadwayStars.com, Crighton Theatre, Houston Chronicle online, The Courier Columns, ThePeoplesCritic.com and tagged American Theatre Critics Association, ATCA, Neil Simon, Stage Right Players, The Lambs Inc., The Odd Couple. Bookmark the permalink.