A Complex SPRING AWAKENING from TUTS

Let’s be clear right out of the box. The current offering from Houston’s Theater Under the Stars is NOT your grandma’s Broadway musical. For all of its theatrical dimensions and explorations of adolescent rebellion, SPRING AWAKENING is clearly a teenage journey of self-discovery through the angst and perils of pubescent sexuality. Based on the 19th century play of the same name by Frank Wedekind, this 2006 Broadway edition features the rock music of Duncan Sheik, and book by Steven Sater, whose lyrics often read like fine poetry. The show would go on to capture eight Tony Awards, including Best Musical, Direction, Book & Score.

The action takes place in the late 1800’s and focuses on the interactions of a group of teenaged boys and girls who are students in a small German town. Directed by Taibi Magar, this TUTS production benefits from a highly talented and radiantly energetic young cast that includes Sophia Introna as Wendla, Wonza Johnson as Melchior, Nathan Salstone as Moritz, Juliette Redden as Martha, Raven Justine Troup as Ilse, Blake Jackson as Hanschen, and Alex Vinh as Ernst. As the plot evolves, young Wendla is in a quest to learn more about where babies come from as she quizzes her hesitant Mama (Liz Mikel is convincing in this, and the several other minor roles for “Adult Women.”) Wendla presses her appeal as Ms. Introna sings a passionate, “Mama Who Bore Me,” that is beautifully reprised with her young girl friends joining in.

Meanwhile, at the local school for boys, young Moritz is troubled by erotic dreams he has been experiencing. He appeals to his more sophisticated and knowledgeable classmate, Melchior, for explanations. We first hear Mr. Johnson’s fine voice during the devilish, “All That’s Known,” as Melchior agrees to prepare a detailed facts-of-life essay for Moritz. The other lads in the class are experiencing similar growing pains, while at the same time feeling great frustration with the harsh discipline of the cruel teacher (Brian Mathis brings his booming voice to this first of his several small roles for the “Adult Men” in the piece). The boys soon erupt in rebellion for the ferocious song and fierce dancing of “The Bitch of Living.” (Choreographer, Marlana Doyle). The girls are not to be outdone when they explode with frustrations of their own during the excitement of “All Our Junk.” 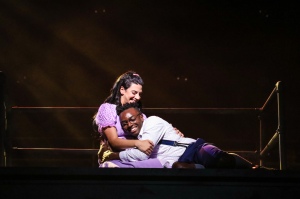 Sophia Introna as “Wendla” and Wonza Johnson as “Melchior” in the Theatre Under The Stars production of Spring Awakening. Photo by Melissa Taylor

But there are calmer moments like the dreamlike staging and haunting vocal blending from the boys and girls during the richness of a, “Touch Me,” that is nicely sprinkled with several fine cast solos. Not surprisingly, a delicate duet of “The Word of Your Body,” from Wendla and Melchior soon results in an unexpected pregnancy. I will leave the details of that plot line for future audiences to discover. There would be moments in the latter part of Act One when the music turned harsh, and shrill with lyrics hard to hear amid the din. But I would note that in the number, “The Mirror-Blue Night,” Mr. Johnson had a focused intensity as Melchior that seemed to really suggest star quality in this young actor. He would shine again with his rich and soothing voice when Melchior joins Wendla and the solid Boys and Girls Chorus for “The Guilty Ones,” at the opening of Act Two.

The cast of Theater Under the Stars SPRING AWAKENING
Photo: Melissa Taylor

The fine orchestra (Music Director, Alex Navarro) is visibly in shadow to the back left of the stage, and occasional segments of the drama are effectively played out in an elevated scene box in the upper right corner of the proscenium. (Scenic designer, Ryan McGettigan, Lighting designer, Bradley King). As the emotionally troubled Moritz, Mr. Salstone brings compelling desperation to the song, “Don’t Do Sadness,” before Ms. Troup changes the mood in her role as Ilse, with a gentle and intoxicating, “Blue Wind.” The rich humanity of songs like “Those You’ve Known,” and “Whispering,” touch the heart. Of course there are some troubling outcomes in Act Two, and one of the most surprising comes when Melchior is called before the school’s headmaster and charged with having written the scandalous facts-of-life essay. Realizing he must now confess, Melchior launches into a song full of expletives with a title I never expected to see in a printed Broadway program. It’s an electrifying full-cast number with undulating choreography and sensational staging. And the song title? So I can get this past the censors, use your imagination to fill in the blanks: “Totally Fu-k-d!” Like I said, this is NOT your Grandma’s Broadway musical.

SPRING AWAKENING continues through October 20th at Houston’s Hobby Center main stage with performances Tuesday, Wednesday & Thursday at 7:30 pm, Friday & Saturday at 8pm, and 2pm matinee performances on both Saturday and Sunday. For tickets visit the website at www.tuts.com, or call (713) 558-8887 locally, and (888) 558-3882 (outside of Houston).