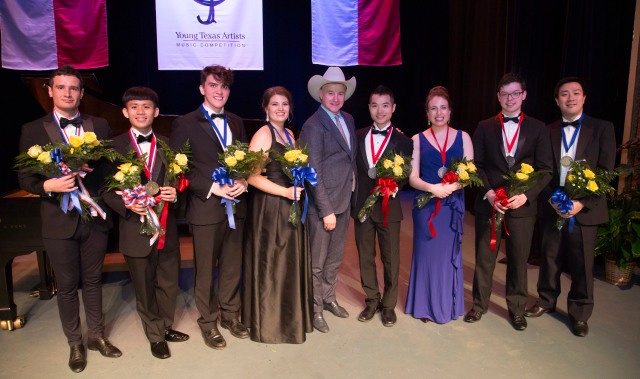 In the book of Ecclesiastes 3:1 (KJV), scripture reminds us, “To every thing there is a season…” and what a joyful season of the year we have now as spring warmth replaces winter’s chill, clock changes bring us longer days, and better still, The Young Texas Artists Competition brings us the much anticipated Concert of Finalists. The event, now celebrating its 35th year (with the continuing brilliant leadership of the organization’s President, Susie Pokorski, and Artistic director, Emelyne Bingham), is dedicated to recognizing the finest young classical musicians from the great state of Texas. The week-long competition (www.YoungTexasArtists.org), culminates with the annual Bach, Beethoven & Barbecue Dinner Dance & Auction, with its ultimate goal of raising scholarship funds for many of the talented young contestants. That Gala party, superbly co-chaired by Terry Husbands Giles and Allyson Ayton, was held last Saturday evening in a grand pavilion set up just around the corner from Conroe’s Crighton Theatre. 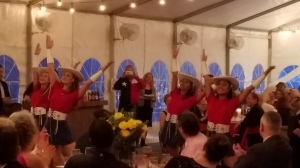 Gala diners enjoyed a performance by the Kilgore Rangerettes.
PHOTO: Courtesy of ThePeoplesCritic.com

It set a musical mood of its own as the guests enjoyed the wonderful country sounds of the Highway 105 Band, and a high-kicking performance by the famed Kilgore College Rangerettes, all while dining on the finest Texas barbecue imaginable. My guest and I had the added pleasure of dining with Annette Spikes, the very enthusiastic representative of the Greater Conroe Arts Alliance, (www.greaterConroeArtsAlliance.com) who provided the crowd with information about the group’s Rising Stars & Legends of Texas event schedule for this past week. 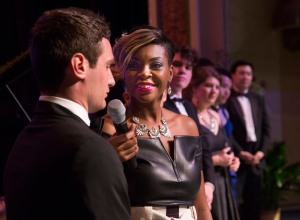 But soon we all found ourselves across the street in the elegant Crighton to enjoy the thrilling performances of the eight finalists in four categories, skillfully hosted by beautiful Jade Simmons, noted concert pianist, motivational speaker, and charming broadcast personality with American Public Media, and NYC’s leading classical radio station, WQXR. Competing in the first category of WINDS, BRASS, PERCUSSION, HARP & GUITAR, would be Won Lee, with his performance of Mozart’s “Allegro aperto,” from the Concerto for Flute and Orchestra in D Major. He brought brisk perfection and a bird-like fluency full of gaiety to the piece, proving himself a joyous Pied Piper of the first order. The effort would win him the gold medal and $3000 First Prize in that category, but his competitor, Zhi-Yuan Luo, was dazzling as well, with his performance of Luigi Bassi’s, Rigoletto Fantasia for Clarinet and Piano. The handsome young man with shining black hair, had equally shining skill on clarinet, casting a hypnotic spell as he ably navigated the dramatic variations of the complex and challenging work. The fluid and delicate movements of his physicality seemed to reflect the every twist and turn of this long, but very delightful piece. The audience was not unaware of this, so in addition to his Silver Medal and $1000 Second Prize, he would also win the vote for the additional $1000 Audience Choice Award.

In the STRINGS category two gifted gentlemen would compete on violoncello. First up was John Belk performing two movements from Samuel Barber’s Concerto for Violoncello & Orchestra. The somber and rich opening strains of the “Andante sostenuto,” soon moved to the vibrant excitement of the “Molto allegro e appassionato,” a work that was sometimes thoughtful and brooding, and sometimes fierce and authoritative. The performance would win him the Silver Medal and $1000 Second Prize. Meanwhile, Lukas Goodman would take home the Gold Medal and $3000 First Prize for his performance of the “Allegro,” from Dvorak’s Concerto in B Minor for Cello & Orchestra. He brought evident dexterity to this piece of many moods, displaying gypsy-like flair as his tousled hair bounced freely across his forehead during each exciting phrase of his mellow performance.

In a sleek, dark gown, soprano Bronwyn White began the VOICE competition as she brought romantic flair to the exquisite opening notes of “Quel guardo…So anch’io la virtù magica,” from Don Pasquale. Her coy and delightfully theatrical performance was at once playful and delightful, while being marked by graceful movement, superb vocal control and soaring high notes. Her reward would be the $1000 Second Prize and Silver Medal.

Winning the Gold Medal and $3000 First Prize would be mezzo-soprano, Brennan Blankenship, whose powerful and elegant voice would match her elegant black satin gown and shimmering necklace during her brief, but very impressive performance of “Sein wir wieder gut,” from Richard Strauss’ Ariadne auf Naxos.

In the PIANO category, Vincent Ip brought immediate and ferocious attack to the prancing opening passages of “Allegro, ma non troppo” from Prokofiev’s Piano Concerto No.3 in C major. There was rapid precision and thunderous excitement before the sudden shift to the rapturous romanticism of the composition’s more delicate passages; and then, ultimately, the fabulous and exciting conclusion that certainly earned Mr. Ip his Silver Medal and $1000 Second Prize. Finally, perhaps saving the best for last, pianist, Artem Kuznetsov, would capture the Gold Medal and $3000 First Prize with his performance of the thrilling, “Allegro con fuoco,” from Tchaikovsky’s familiar classic, Concerto No.1 in B-flat minor. Perhaps it was the exacting precision he brought to the rippling and pulsing grandeur of the piece that seemed to totally captivate the cheering audience. It was then that the esteemed panel of distinguished judges (Eric Mitchko, Diane Schultz, Kay Stern, Kirk Trevor and William Wellborn) named Kuznetsov as the winner of the night’s GRAND PRIZE, an additional $3000 and a Texas State Flag that had been flown over the capitol in Austin. That put everyone in just the right mood for the closing audience sing-a-long of “Deep in the Heart of Texas.”