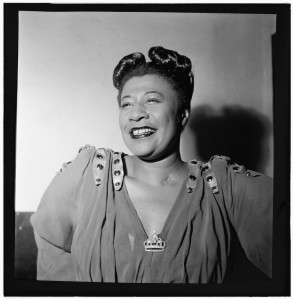 I don’t remember the exact details of the performance, but sometime in the late 1970’s or early 80’s, I recall viewing one of the early PBS telecasts of Live from the Metropolitan Opera. The series featured full live productions direct from the stage of The Met, with interesting backstage interviews of key members of the company, also presented live during the intermissions. I cannot recall who was being thus interviewed, but I remember the moderator asking, “Have you ever encountered a singer with perfect pitch?” The respondent hesitated, at first replying, “Perfect pitch? No…but oh, yes… Ella Fitzgerald.” It is not surprising then, that this past weekend the Houston Symphony saw fit to present a splendid tribute concert titled “The Ella Fitzgerald Songbook,” honoring the late great legendary singer. On the surface such an undertaking might seem doomed to failure, for who could hope to find a singer that could successfully replicate the brilliant song styling of such a vocal genius? Leave it to the Houston Symphony to find not one, but three such blazing talents, and the result was a concert of such sheer magnificence that one could only hope Miss Fitzgerald was enjoying it from some heavenly balcony above.

Under the skillful and very animated baton of conductor, Steven Reineke, the orchestra got things off to a snazzy start with the rousing big band classic, “Take the A Train.” Then it was time for the first of the talented ladies to take center stage.

With her wide smile, and dressed in a sparkling sea-green gown, a beaming Capathia Jenkins launched into a joyful, “Strike Up the Band.” She followed with the pleasing Gershwin/Nelson Riddle arrangement of “Clap Yo’ Hands,” but her microphone seemed briefly out of balance with the powerful orchestra for that number. Next up was the arrival of vocalist, N’Kenge, wearing an absolutely sensational gown of flowing red-orange chiffon, with gleaming rhinestone belt, and a dramatic full-split design. She offered a sassy, perky audience sing-a-long of a Cab Calloway nonsense song titled “Zah, Zuh, Zaz,” and brought it to a fierce and soaring conclusion. She then made a surprisingly mellow shift to the passion and desperation of her wrenching, “Stormy Weather.”

Continuing what at times seemed like an elegant fashion show, the third performer, Montego Glover, arrived on stage in a creamy, form-fitting gown that sparkled from top to bottom as she took off like a vocal rocket with a solid and authoritative, “You Go to My Head,” and then moving on with her smooth phrasing (and occasional scat singing) for a gentle and embracing, “I Can’t Give You Anything But Love (Baby).” Then, while the ladies took a breather, the orchestra delivered a sexy, “The Lady is a Tramp,” with terrific sax and trumpet solo moments, and a fine arrangement that seemed to have the various sections of the orchestra talking to one another. In the next segment Jenkins returned to the stage bringing whisper-like tenderness and delicacy to, “Our Love is Here to Stay,” and N’Kenge arrived in a soft, pink layered wedding cake gown for her sultry and seductive, “They Can’t Take That Away from Me.” Miss Glover then closed out the first half of the program bringing a sense of theatrical drama to a “Come Rain or Come Shine,” that had a thrilling conclusion.

Following the intermission, while conducting the orchestra in the musical excitement of “One O’Clock Jump,” the visibly enthusiastic maestro Reineke appeared to be doing some jumping of his own on the podium.

Back now in a sleek and fascinating gown, N’Kenge performed a sensational, “Fascinating Rhythm.” Jenkins followed with a merry and explosive, “Something’s Gotta Give,” and Glover warned us of musical delights ahead with an enticing, “The Best Is Yet to Come.” A joyous and prancing, “Mack the Knife,” from the orchestra had a pulsing and thrilling finale. N’Kenge reappears in a smashing feathered gown and calms the room, as a tinkling piano leads her into the classic barroom tale of, “One For My Baby (And One More For the Road).” It captured the appropriate melancholy at the outset, but seemed to wander into excess showy vocal embellishments toward the end. Glover’s “God Bless the Child,” was a warm and touching rendition of the Billie Holiday hit, and Jenkins glows as she sings a haunting, “Summertime,” that lifts the audience heavenward even before she sings the line, “Spread your wings and take to the sky.” The three divas combined forces at the end bringing a silken blend to “Blues in the Night.” The cheering and appreciative audience leapt to its feet in ovation, and was rewarded with an encore of “C’mon Get Happy.” But it was too late. We were already there!

A member of both The Lambs Club Inc. and The American Theatre Critics Association (ATCA), the columns of DAVID DOW BENTLEY III have appeared on Broadway websites, in newspapers from the East Coast to the Gulf Coast, and may be viewed online at the website: www.ThePeoplesCritic.com . E-mail may be directed to ThePeoplesCritic3@gmail.com