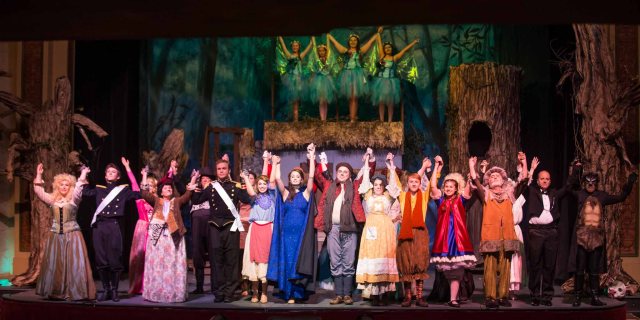 The Cast of INTO THE WOODS
All Photos by Dave Clements / DWC Photography. Click any photo to enlarge.

The music of Broadway composer, Stephen Sondheim, is unusually complex and sophisticated, but sometimes considerably dark as well. It would never be confused with the cheerful Rodgers & Hammerstein tunes that you might hum on the way home from a theater. So it is, that I tend to approach Sondheim with a bit of caution. Such was the case when I attended last week’s opening weekend of Stage Right’s very wonderful production of Sondheim’s INTO THE WOODS, with its unique musical peek into the world of childhood fairy tales. (Music & Lyrics by Sondheim, Book by James Lapine). It happens that I had never seen either a staged production or the subsequent film of the show, and my brief research about it left me wary about how the complicated plot described could possibly be carried off. Stage Right has answered all my concerns with a delightful production.

The key elements of that success are several. First and foremost, gifted director, Tina Cafeo, has assembled an outstanding cast with the exceptional vocal talent required to take on this very difficult musical score. Complementing those efforts was the very fine orchestral recording that accompanied the singers while pairing perfect synchronization with their voices. (Musical Director, Ana Guirola Ladd). The skill, timing and memorization involved for these actors to carry this all off so successfully were simply remarkable. Dressed in sensational storybook costumes (designer, Denise Schmidt DeBold), the wonderful performers include Mandy Hall as the frightening Witch. Gavin McKinnon plays the distressed Baker, who along with his equally troubled wife (Sarah Walker Wilkins) is seeking relief from the Witch’s curse on their home. Velvet-voiced Hillary Moore is an enchanting Cinderella, and Cain Hamilton is her dashing Prince full of bluster. Cossette Czarnopis is a multi-faceted Little Red Riding Hood, who provides plenty of fun, even when up against the mean old Wolf (Douglas Holcomb). For Beanstalk fans, the part of young Jack is beautifully performed by Hayden Olds. Jack’s mother is played with appropriate desperation by Diana Egley, when Jack infuriates his mom by accepting a handful of beans in payment for selling the cherished family cow, Milky White. (Amusingly played, in a very unique costume, by Becky Kinch, who also doubles as Red Riding Hood’s Granny). Imprisoned high in the tower with her long golden tresses, the flaxen-haired Rapunzel (Meredith Fisk), is pursued by her own handsome Prince (Nicholas Gant), who could probably win a Best Dashing Leap contest for his hilarious jumps off stage. For still more hilarity we have the comically costumed (and wigged) Cinderella’s Stepmother (Jo Champion), and the outlandish stepsisters, Florinda (Nadia Urrea Wall) and Lucinda (Alyssa O’Brien).

Jack and his Mother

It is worth mentioning that the show is structured in two distinct parts: Act One with its very happy ending that reportedly caused some opening night audience members to go home at intermission believing the show was over. Act Two might be a bit too complex and convoluted for some, as it undertakes to tell us what happens to the characters several years later. There were some happily giggling children in the audience, but parents of the very young might consider slipping home after Act One of this fairly long production. In any event, pleasant images will linger long in memory because beautifully framing all of this action is the irresistibly delicious fairytale set and scenic design of Kara Kowalik. From prison towers and thatched roofed houses, to emerald green forests and palace ballrooms, it is charming all the way.

INTO THE WOODS continues thru November 4th at Conroe’s Crighton Theatre, 234 N. Main. Performances are 8pm Friday & Saturday, with Sunday matinees at 2pm. For tickets and information call (936) 441-7469 or visit the website at www.stage-right.org/.

David Dow Bentley III, writes columns about the performing arts which are featured in newspapers from the East Coast to the Gulf Coast. A member of the American Theatre Critics Association (ATCA), The International Theatre Critics Association, and America's oldest theatrical club, The Lambs, he also had long service as the editor of The Lambs' Script magazine. Mr. Bentley may be contacted via e-mail at ThePeoplesCritic3@gmail.com.
View all posts by The People's Critic →
This entry was posted in Broadway, BroadwayStars.com, Crighton Theatre, Houston Chronicle online, Stage Right Productions, The Courier Columns, Theater Reviews, ThePeoplesCritic.com and tagged Cinderella, Fairy Tales, Into the Woods, Jack and the Beanstalk, James Lapine, Little Red Riding Hood, Rapunzel, Stephen Sondheim, The Brothers Grimm, Tina Cafeo. Bookmark the permalink.

2 Responses to Stage Right’s Enchanting Journey INTO THE WOODS