Dancing is the star of Class Act’s THOROUGHLY MODERN MILLIE

[All photos by Tracy Robinson/spryART. Click any photo to enlarge.]

Taking the helm as director for this latest effort was the troupe’s renowned Founder and Artistic Director, Keith Brumfield. He had wonderful support from Music Director, Rae Moses, and his fine orchestra, and the snappy Overture quickly captured the excitement and fast-paced mood of NYC. With all due respect to those two talented gentlemen, I can’t conclude this first paragraph without declaring that Choreographer, Lindsay English, and her astonishingly gifted young cast of dancers, have collectively put their best foot forward in more ways than one. Dance would rule the day for this knock-out production!

The time is the early 1920’s, and an eager and starry-eyed young woman from Kansas, named Millie Dillmount (pretty Portia Durant), has just arrived on the early morning streets of the Big Apple. With innocent appeal and suitcase in hand, she plans to take the town by storm in her quest for a good job and a rich husband. However, a sudden mugging leaves her without money or options. Ignoring the suggestion that she head back to Kansas from a young man she encounters (Seamus Doyle in the role of Jimmy), she summons up her true grit and soon finds herself in the suspicious Hotel Priscilla. 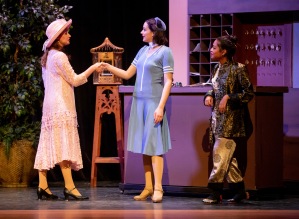 It is there that young ladies suffering hard times sometimes disappeared at the hands of the conniving owner (Daniela Garrett as the zany Mrs. Meers).

With the help of the two hapless Chinese immigrant brothers in her employ (Beau Snortland as Ching Ho, and Luke Tabor as Bun Foo), Meers happily kidnaps unsuspecting girls who are shipped off to the white slavery trade in Hong Kong. Tabor and Snortland provide plenty of laughs chattering away in Chinese that is hilariously translated for the audience via captions projected above the proscenium. Miss Garrett’s devilish performance as Meers was capped by her sinister number, “They Don’t Know.” Meanwhile, Sarah Yeates explodes on stage giving a scene-stealing and comic performance as Millie’s newfound friend at the hotel, Miss Dorothy Brown, a wealthy and glamorous femme fatale. She is slumming a bit in the shoddy hotel in order to learn, “How the Other Half Lives,” as the gals deliver that prancing and adorable duet.

Evan Carlson as Graydon and Portia Durant as Millie

Millie finally lands a job as stenographer to the boss of the Sincere Trust Insurance Co., Mr. Trevor Graydon III (Evan Carlson). Millie takes Grayson’s shorthand examination under the watchful eye of the cranky secretarial pool supervisor, Miss Flannery (Skylar Doescher, in a comical performance that suggests she would be well-cast as Miss Hannigan in a future production of ANNIE). The tongue-twisting rapidity of the Millie/Grayson duet of “The Speed Test,” is a number remarkably well done by Durant and Carlson, while sensationally accompanied by the tap dancing of the colorfully costumed ensemble of office secretaries.

Of course Millie has hopes of capturing Graydon as a husband, but Dorothy suddenly shows up to seduce him herself. That would be just one of the show’s many on-again, off-again romantic relationships that add to the fun.

MILLIE and her “flappers’ dance the Charleston.

Yet another mesmerizing tap-dance sequence from the ensemble that had to be seen to be believed, was the dazzling Speakeasy scene for the cleverly titled, “Nutty Cracker Suite.” That Charleston-style number displayed more breathtaking tap dancing and colorful period costumes (designer, Kim Freeman), all beautifully showcased by the fine lighting designs of Blake Minor. If the dancing was the star of this show, I would have to say the costumes were the co-star. It would all pass for professional on Broadway, and don’t be surprised if one day some of these talented youngsters end up there.

CLASS ACT will perform the Christmastime favorite, It’s A Wonderful Life, on December 14, 15, & 16. For tickets and information visit http://www.classactproductions.org/ .

David Dow Bentley III, writes columns about the performing arts which are featured in newspapers from the East Coast to the Gulf Coast. A member of the American Theatre Critics Association (ATCA), The International Theatre Critics Association, and America's oldest theatrical club, The Lambs, he also had long service as the editor of The Lambs' Script magazine. Mr. Bentley may be contacted via e-mail at ThePeoplesCritic3@gmail.com.
View all posts by The People's Critic →
This entry was posted in Broadway, BroadwayStars.com, Class Act Productions, Houston Chronicle online, Nancy Bock Center for the Performing Arts, The Courier Columns, Theater Reviews, ThePeoplesCritic.com and tagged Dick Scanlan, Jeanine Tesori, Keith Brumfield, Richard Morris, Thoroughly Modern Millie. Bookmark the permalink.