A Seemingly Ageless TOMMY TUNE Charms Fans at the Paramount 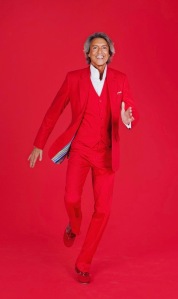 It was yet another coup for the magnificently restored 1930 Paramount Theater in the quaint Hudson Valley town of Peekskill, and it graced that stage on the recent afternoon of Father’s Day. The one-man show starred one of Broadway’s brightest lights, ten-time Tony Award winner, Tommy Tune, in a program titled, TOMMY TUNE TONIGHT. (The 2 o’clock matinee notwithstanding). The performance was a highlight of the Hello Again Dolly Festival under the guidance of festival director and renowned artist, Christopher Radko. The summer-long celebrations would include nearly two dozen various events commemorating the 50th Anniversary of the making of the 1969 motion picture, “Hello Dolly,” starring Barbra Streisand, directed by Gene Kelly, and filmed in the area of Cold Spring and Garrison’s Landing, just a few miles north of Peekskill on the Hudson River.

For those in the audience old enough to remember, Mr. Tune arrived onstage seeming a much younger version of his 79 year-old self, though his still handsome full head of hair is now grayer. Incredibly tall at 6’6 ½”, and amazingly slim in his sleek, soft blue suit and matching vest, he was the embodiment of youthful “cool” on a very hot day. That same cool would pervade the performance that followed.

He opened with a musical invitation to, “Let’s Get Lost,” and as we began to lose ourselves in his talents, he quickly began to accent the song with his signature (and still dazzling) tap dancing, albeit on a small tap platform at mid-stage. His gleaming silver shoes could have rivaled Judy Garland’s Ruby Slippers. What followed was a breezy 90 minutes of song, dance, and the star’s many fascinating reflections and memories of an amazingly successful life in the world of musical theatre. Tune is a proud Houston native where I have been privileged on several occasions to report on his sensational annual black-tie evening of the TOMMY TUNE AWARDS. Patterned after the Tony Awards, the red carpet event honors the best Houston area high school musicals of the year.

In this production, one of Tune’s anecdotes describes his youthful New York arrival on St. Patrick’s Day for his first trip to the Big Apple, and how, after playfully telling the director his extreme height was 5’18 ½”, Tune’s very first audition (Singing “You Gotta Have Heart”) won him a part in the chorus of Irma La Douce. Surrounding the star, warm stage lighting would alternate from soft lavender to vibrant raspberry and lime greens as his fascinating story began to unfold. His optimism was apparent with, “It Could Happen to You,” and then with “It’s Not Where You Start, It’s Where You Finish,” concluding that song athletically, high atop his one stage prop, a towering step ladder. Then came a relaxing, “Let’s Take it Nice and Easy,” that contrasted with Tune’s descriptions of the many exhausting tours of his Broadway successes in such productions as, “Nine,” “Best Little Whorehouse in Texas,” “Grand Hotel,” and “The Will Rogers Follies.” Memories of “Bye Bye Birdie,” included Tune’s gentle rendition of, “Everything is Rosie.” The voice was pleasant, though an occasional touch of hoarseness would send him back for a sip of water at the piano where his longtime music director, Michael Biagi, presided over a smooth trio that included bass and percussion. But the song selections were abundant, often revealing the aging star’s poignant look back at a long and successful career that the soon-to-be octogenarian knows cannot go on forever. He reflected on how “Dancers die twice,–once when they die, and once when they stop dancing.” That theme was evident as he sang the bluesy, “Can’t Get out of This Mood,” and especially with the phrase, “…The days dwindle down to a precious few…” as he sang, “September Song.” Elsewhere the mood was upbeat and sparkled with his dance genius as in “The Feelin’ Too Good Today Blues.” Under starry lighting there was a dreamy, “Up on the Roof,” then more great tapping for the tropical flavors of “Sand in My Shoes,” and the rhythmic delights of, “So Nice.” (The “Summer Samba”). There was a glowing, “Nowadays,” from the show Chicago, and affectionate memories of dance partners like Gwen Verdon, Chita Rivera, Ann Reinking, Marge Champion, Lauren Bacall, Barbra Streisand, and especially his My One and Only costar, British model, Twiggy.

There were still more memories of backstage visits from the stars. Tune does a marvelous impression of Carol Channing, repeating her advice after he broke first one foot, and then the other: “Maybe that’s God’s way of giving you symmetry.” He also reports first meeting Fred Astaire, who looked him up and down and quipped, “You are one tall son of a bitch!” Another marvelous tale told of the opening night of My One and Only, when Tune and legendary dancer, Charles “Honi” Coles paired for a soft shoe number that caused such a record-breaking uproar of audience enthusiasm that the musicians in the pit had to turn back all their music pages so the number could be repeated. Both gents would receive Tony Awards for that show. There were more delights with, “They All Laughed,” “They Can’t Take That Away From Me,” “Stairway to Paradise” and “I Got Rhythm,” which may be the show’s greatest understatement coming from the brilliant Mr. Tune. Finally, he shared a saying he recalled: “Telling your life on stage is the ego’s last stand.” With that, he charmed us once more with a touching, “Ev’ry Time We Say Goodbye,” that hinted of a final farewell.