It was my first visit to the elegant estate of CARAMOOR. This legacy of the original owners, Walter & Lucie Rosen, became what is now the Caramoor Center for Music and the Arts near Katonah, New York. Just an hour and a half from The Big Apple, the estate and its beautiful home now serve as a live music venue offering symphonic, opera, chamber, American roots, and jazz performances, in addition to various educational programs. So it was that I came to sample the Caramoor Summer Music Festival, on a soft, warm evening that many of the estate staff told me was the loveliest night of the season. 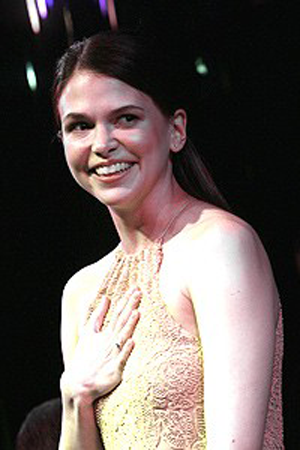 The featured artist for the performance I attended was multi-talented Broadway star, Sutton Foster. Renowned for her Tony Award-winning triumphs in Anything Goes and Thoroughly Modern Millie, she also originated roles in the premiere productions of Little Women, Young Frankenstein, The Drowsy Chaperone, and Shrek The Musical. Already well-known to audiences at Carnegie Hall and Lincoln Center, her Caramoor program titled, An Evening with Sutton Foster, was a generous serving of Broadway musical hits, along with many memorable tunes from The Great American Songbook.

Under the soft, and ever-changing pastel lighting of Caramoor’s Venetian Theatre, the star set the tone for the evening, opening with a joyous rendition of Rogers & Hammerstein’s “A Cockeyed Optimist” that quickly displayed both the crisp clarity of her voice, and her considerable gifts as a vocal storyteller. Those gifts would be evident throughout the performance. There was a pure, clean delivery of Sondheim’s “Everybody Says Don’t,” from Anyone Can Whistle, and her rendition of “N.Y.C.” from Annie could have etched fine crystal. Always there was an intimate connection with the appreciative audience, paired with a splendid and theatrical sense of movement on the stage accented by the smooth gestures of the attractive singer’s slender arms. Clearly, this actress was a pro very much at ease on the stage. Promising the crowd a night of “new songs, old favorites and a few surprises,” she quickly launched into a warm and embracing, “The Nearness of You,” that seemed gently whimsical.

There was a jazzy transition for the amusing song, “Air Conditioner,” describing a gal with just one requirement of her summer lovers. The audience howled with delight. Next, with story-telling mastery in every syllable, she would glide through, “I Get a Kick Out of You,” from her Broadway triumph in Anything Goes. There was coy fun from Sondheim’s, “Don’t Look at Me,” and then a gentle, blissful and dreamlike love story during Cole Porter’s, “C’est Magnifique.” Miss Sutton’s onstage trio complemented every number without ever overwhelming the gifted vocalist. The perky, “Up on the Roof,” was nicely sprinkled with delicate accents on guitar (Kevin Kuhn), bass (Leo Huppert), and piano (Music Director, Michael Rafter). There was a glowing, “If I Were a Bell,” and her joyous “Singin’ in the Rain,” could easily rival that of Debbie Reynolds. And there was still more comic relief when Sutton sang about believing, “The Lies of Handsome Men.” She would demonstrate cheerful skill on ukulele for “Ain’t Misbehavin’,” and then shift gears amazingly for a sassy and lashing, “Down with Men.”

In keeping with her promise of “a few surprises,” Miss Sutton brought onstage her “best friend,” singer, Megan McGinnis. The two met when they originated the roles of Jo and Beth (respectively) for the 2005 Broadway musical, Little Women. On this occasion the pair blended their voices beautifully for several numbers, culminating in the skillful counterpoints of a magnificent acapella duet of Simon & Garfunkel’s classic, “Old Friends.” The audience roared its approval. I would like to do the same.

David Dow Bentley III, writes columns about the performing arts which are featured in newspapers from the East Coast to the Gulf Coast. A member of the American Theatre Critics Association (ATCA), The International Theatre Critics Association, and America's oldest theatrical club, The Lambs, he also had long service as the editor of The Lambs' Script magazine. Mr. Bentley may be contacted via e-mail at ThePeoplesCritic3@gmail.com.
View all posts by The People's Critic →
This entry was posted in Broadway, BroadwayStars.com, Concert Reviews, Theater Reviews, ThePeoplesCritic.com and tagged Caramoor, Kevin Kuhn, Leo Huppert, Megan McGinnis, Michael Rafter, Sutton Foster, Venetian Theatre. Bookmark the permalink.