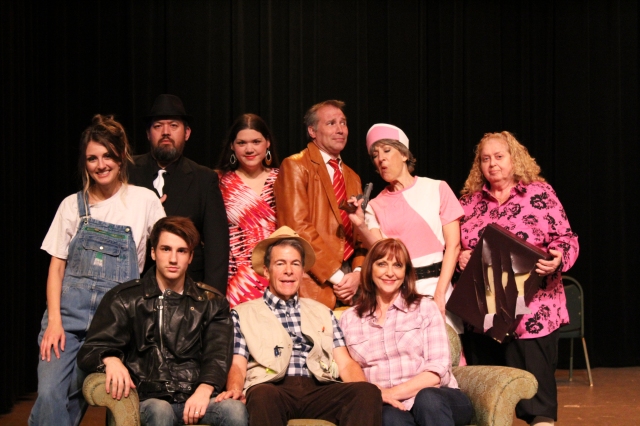 It’s ShowTime again for the cheerful band of Stage Right Players at Conroe’s Crighton Theatre as they present another of the numerous comedies from Jessie Jones, Nicholas Hope, & Jamie Wooten. This one declares its style up front with the title, “FARCE OF NATURE.” Directed by Melody Montez, it’s a breezy, lightweight bit of comedy fluff, which in its current form seems to alternate in producing both audience laughs, as well as uncomfortably long periods of audience silence during some of the less amusing antics presented in this zany romp.

The action revolves around a rustic and struggling old fishing lodge in the Ozarks with the amusing name of the Reel ‘Em Inn. (Cozy set design by Ms. Montez & Johnny Barton). D. Gene Wilburn (Todd Brady) is the proprietor of this tired vacation spot, and his amorous wife, Wanelle (Amy Sowers), seems to think that when it comes to love making, her husband is just as tired as their ailing business. In fact, in desperation she has had him visit a hypnotist, where, unbeknownst to D. Gene, she has obtained a hypnotic suggestion to use on her husband when she is hoping for some long-denied intimacy. That running gag brings some of the best laughs of the evening. I will say no more, and simply add that everything is good clean fun.

As the plot progresses we meet Wilburn’s young son, Ty (Calvin Dabrowski), and his pretty girlfriend, Jenna (Jessica Bearden). Jenna has been waiting impatiently for Ty’s return, but now that he’s back home nothing goes smoothly with the arrival of a high-strung and near hysterical guest in the witness protection program. His name is Carmine DeLuca (Robert Faber), and he is in constant fear of being found by the gangland figure, Sonny Barbosa (burly Johnny Barton), who is now out of jail after being fingered by DeLuca some time earlier.

Trying to bring some order to the chaos that follows, trusty Stage Right regular (and founder), Carolyn Wong, is back in another of the feisty comic roles with which she has become pleasantly identified. Here she plays D. Gene’s sister, Maxie Wilburn Suggs, a gun-toting, one-time police officer hoping to get back in the game, but never quite sure where she’s kept her bullets. With her southern drawl and swagger, she hopes to regain her place in law enforcement by successfully protecting the nervous and ever-fidgety DeLuca.

Adding to the mayhem, Sonny’s sassy and sexy wife, Lola (Bre Jatzlau), has a crush on young Ty and has pursued him here to the inn. Before long Sonny himself arrives to intercede and discovers the added bonus that his nemesis, Carmine, is present as well. If all this sounds like a prescription for lunacy, you don’t know the half of it. Characters run on and off stage, doors slam, silly disguises appear and misunderstandings abound. Even a possible real estate buyer for the inn arrives to add to the confusion with the entrance of last-minute character, Roxanne Thorne (Stella Leland).

The time and effort put in by a cast of local players such as Stage Right must be appreciated by the community blessed with their productions year after year. On the downside, if this particular show has one notable flaw, it’s that this hard-working cast is often working too hard. Comedy is fun when comical characters are BELIEVABLE, and that is not always the case here. Fans of I Love Lucy know that Lucy and Ethel aren’t really working in a factory and shoving chocolate bonbons into their clothes, but we believe it because those gifted actors believe it. That wonderful magic is very hard to do. All of that said, it is worth noting that Mr. Brady’s low key and understated performance as D. Gene was a very convincing one. His was an easy going, confident, and endearing portrayal, and with his gentle sense of comedy and effortlessly resonant voice for the stage, he struck me as a potential character actor who might do very well in a running sitcom if just the right part came along.

FARCE OF NATURE continues weekends thru April 30th at Conroe’s Crighton Theatre, 234 N. Main. Performances are 8pm Fridays & Saturdays, with Sunday matinees at 2pm. Members of law enforcement and the military presenting I.D. are offered a special $15.00 admission for themselves and guests by calling in advance. For general tickets and information call (936) 441-7469 or visit the website at www.stage-right.org/.

David Dow Bentley III, writes columns about the performing arts which are featured in newspapers from the East Coast to the Gulf Coast. A member of the American Theatre Critics Association (ATCA), The International Theatre Critics Association, and America's oldest theatrical club, The Lambs, he also had long service as the editor of The Lambs' Script magazine. Mr. Bentley may be contacted via e-mail at ThePeoplesCritic3@gmail.com.
View all posts by The People's Critic →
This entry was posted in BroadwayStars.com, Crighton Theatre, Stage Right Productions, The Courier Columns, ThePeoplesCritic.com and tagged FARCE OF NATURE, Jamie Wooten, Jessie Jones, Nicholas Hope. Bookmark the permalink.