A Soaring DREAMGIRLS Triumphs in Houston

When I first saw the musical, DREAMGIRLS, back in 1982, the Broadway blockbuster was at the beginning of what would become a four-year run on The Great White Way. With the often-thrilling music of Henry Krieger, complemented by Tom Eyen’s story-telling skill for the book & lyrics, all that was needed was a stellar group of fine actors with powerful voices. That latter requirement was nicely filled with a talented original cast headed up by legendary vocal powerhouse, Jennifer Holliday. Ironically, I recall being a bit overwhelmed at the time by the over-the-top volume of many of this show’s soaring numbers. Perhaps that’s because 35 years ago I was still in the grip of the many still-familiar hit tunes of gentler composers like Rodgers & Hammerstein, and Lerner & Lowe. But time has been kind to me, and I think I’m ready now to handle what was then the pioneering of an explosive and very different kind of musical mentality. 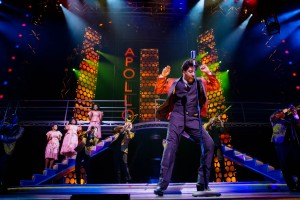 Now, these many years later, Houston theatergoers have the opportunity to see this wonderful show performed on the Theatre Under the Stars main stage of the Hobby Center. It’s a trip well worth taking as it follows the ups and downs in the careers of three talented young black women who begin their show business adventure in the early 1960’s as the vocal group, The Dreamettes. Full-voiced and full-figured Effie (Zonya Love) is the trio’s lead singer, and in the eye-popping opening scenes she is joined by her friends, Deena (Phoenix Best) and Lorrell (Ta’Nika Gibson), as the gals compete in the famed Apollo Theatre talent show performing a song written by Effie’s brother “C.C.” (Wonza Johnson).

Though the ladies fail to win the contest, they have a backstage encounter with a slick, sometime car salesman named Curtis (Thomas Hobson), who knows how to spot talent and soon becomes their manager. He works a deal with pop singer, Jimmy “Thunder” Early (E. Clayton Cornelious), and his manager Marty (Jacques C. Smith) to hire the Dreamettes as back-up singers. I could go on and on about the complicated romantic and professional clashes and jealousies that ensue, but all of that pales in importance to the often thrilling music and equally thrilling performances that make this visual feast a must-see for local theatre fans. 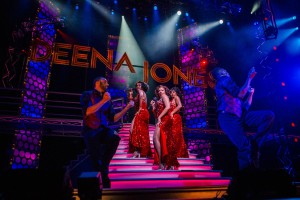 When Mr. Cornelious joins the ladies for the electrifying, “Fake Your Way to the Top,” one could swear it was the grand finale. Impressive vocal excitement continues when the gents combine forces for a tongue-in-cheek salute to the American Dream during “Cadillac Car.” The shadowy and haunting, “Steppin’ to the Bad Side,” punctuates the backroom payola scandals that bedeviled the recording industry of the time. A nightclub atmosphere takes over the stage for the full company’s dance fun in “Party, Party,” before Cornelious delivers an amusing and pants-dropping, “I Want You Baby.”

Conflicts arise when manager, Curtis, gives Effie the bad news that he is elevating Deena to lead singer, but everyone encourages Effie to remain during the poignant and lovely, “Family.” As their career continues, the gals open in the Crystal Room singing their hit single of the title tune, “Dreamgirls,” and bring rockin’ excitement to the song, “Heavy,” while dazzling the audience with rapid-fire costume changes. The passion of grand opera permeates the drama of Effie’s exile from the group during the explosive, “It’s All Over.” She counters as Miss Love provides one of the show’s great highlights during the desperation of Effie’s heart-wrenching, “And I am Telling You I’m Not Going.” The director should have dropped the Act One curtain right then so the audience could explode in a deserved standing ovation. 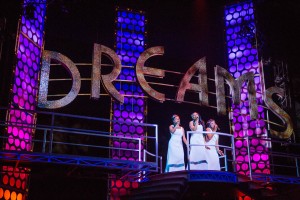 But there is so much more to enjoy in the stratospheric excitement of Act Two that begins with the sassy, sexy and sensational, “Dreams Medley,” and goes on to include the classic, “One Night Only.” Maybe it was just one night, but those of us in attendance will not soon forget it!

DREAMGIRLS continues through April 16th at Houston’s Hobby Center main stage, with performances Tuesday, Wednesday, Thursday, & Sunday at 7:30 pm, Friday & Saturday evenings at 8pm, and Saturday and Sunday matinees at 2pm. For tickets visit the website at http://www.thehobbycenter.org, or call (713) 558-8887 locally, and (888) 558-3882 (outside of Houston).

David Dow Bentley III, writes columns about the performing arts which are featured in newspapers from the East Coast to the Gulf Coast. A member of the American Theatre Critics Association (ATCA), The International Theatre Critics Association, and America's oldest theatrical club, The Lambs, he also had long service as the editor of The Lambs' Script magazine. Mr. Bentley may be contacted via e-mail at ThePeoplesCritic3@gmail.com.
View all posts by The People's Critic →
This entry was posted in BroadwayStars.com, HERE Lifestyle & Entertainment, Houston Chronicle, The Villager Columns, Theatre Under the Stars, ThePeoplesCritic.com and tagged Broadway, BroadwayStars.com, Dreamgirls, Henry Krieger, Houston, Michael Bennett, Theatre Under the Stars, ThePeoplesCritic.com, Tom Eyen. Bookmark the permalink.

2 Responses to A Soaring DREAMGIRLS Triumphs in Houston