It was an extraordinary one-night-only event at Jones Hall last Thursday when the Houston Symphony took its place on stage below a large movie screen that was about to display a sensational film in a very sensational new way. Fans of classic American cinema and science fiction have no need of my recounting all the details of the legendary 1982 Steven Spielberg blockbuster, “E.T the Extraterrestrial.” A wondrous fantasy that broke even the colossal “Star Wars” box office records of the day, the captivating story weaves the tale of young ten year-old, Elliot (Henry Thomas), who lives in the suburbs of California close to the nearby forest where an extraterrestrial creature is left behind by a hastily departing alien spaceship. Along with his skeptical older brother, Michael (Robert MacNaughton), and little sister, Gertie (a precocious performance from young Drew Barrymore), Elliot befriends the creature, and the three undertake to keep the presence of this unusual guest in their home a secret from their mother, Mary (Dee Wallace). Enough cannot be said about the solidly convincing performances director, Spielberg, was able to draw from his gifted young actors. That was especially true of Mr. Thomas as the sensitive young, Elliot. His tender performance was nothing short of mystical. The glorious adventures that follow would have a power of their own. But on this occasion, the musical power and majesty of having one of the world’s finest orchestras accompanying the screening of the film in live performance of John William’s magnificent Oscar-winning score, would create a memorable evening for young and old.

This kind of cinematic concert is not entirely new to fans of Houston Symphony, and readers may have seen my earlier tributes to this orchestra for the several such symphonic cinema events linked below, and celebrating everything from Bugs Bunny, to Charlie Chaplin, and even last season’s “Singin’ in the Rain.”:

I mention these earlier concerts to make readers aware that such limited-performance cinematic concerts do take place from time to time, and music fans should be on the lookout for future opportunities to share in what is a truly unique musical experience. 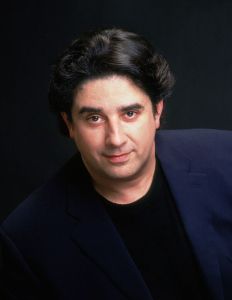 As for this E.T. performance, it is a splendid addition to that unusual and evermore popular art form. Conductor, Constantine Kitsopoulos, accomplished his twin tasks superbly as his baton perfectly guided the musicians through the entire score, while he was at the same time watching his own individual monitor displaying the progress of the film in order to perfectly synchronize the music with the screen. The skills required from all involved in order to accomplish the wonderment of this live miracle would seem to be beyond my wildest imagination.

From the ghostly music of the opening credits, through the film’s countless moments of fear, friendship, secrets, danger, hope, and enchantment, conductor, Kitsopoulos and his gifted musicians captured every nuance and emotion as they guided us perfectly to the film’s ultimate destination of tenderness and love. There was tenderness and love as well in the appreciative outburst of the cheering audience that leapt to its feet with shouts of, “Bravo,” at the film’s conclusion.

David Dow Bentley III, writes columns about the performing arts which are featured in newspapers from the East Coast to the Gulf Coast. A member of the American Theatre Critics Association (ATCA), The International Theatre Critics Association, and America's oldest theatrical club, The Lambs, he also had long service as the editor of The Lambs' Script magazine. Mr. Bentley may be contacted via e-mail at ThePeoplesCritic3@gmail.com.
View all posts by The People's Critic →
This entry was posted in Constantine Kitsopoulos, Drew Barrymore, E.T. the Extraterrestrial, Henry Thomas, Houston Symphony, John Williams, Jones Hall, Steven Spielberg and tagged BroadwayStars.com, Classical Music, concerts, E.T. the Extraterrestrial, Houston Symphony, ThePeoplesCritic.com. Bookmark the permalink.

1 Response to An Extra Special EXTRATERRESTRIAL from Houston Symphony’s “E.T.”