A Symphonic SINGIN’ IN THE RAIN 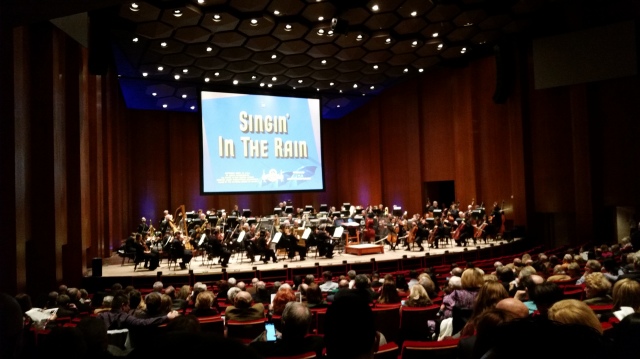 How appropriate that on this Super Bowl weekend the Houston Symphony has chosen to screen a super movie with 1952’s MGM musical classic, SINGIN’ IN THE RAIN, starring Hollywood legends, Gene Kelly, Debbie Reynolds and Donald O’Connor. But this one-weekend event is no ordinary screening, because in this case the film is being accompanied by the orchestra’s live performance from the stage of the entire musical score. (Lyrics by Arthur Freed & music by Nacio Herb Brown). This cinematic treasure has been named both the #1 musical, and the #5 motion picture of all time. 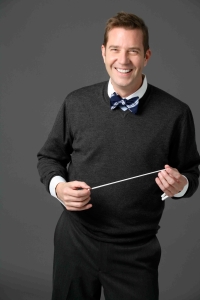 Right from the elegant overture that accompanies the film’s opening credits the memorable score, in the hands of this superb orchestra, wraps its welcoming arms around the appreciative audience. The youthful brilliance of handsome conductor, Steven Reineke, was quickly on display at Friday’s opening as he expertly dealt with the incredible technical complexities of such a live performance requiring perfect synchronization of the orchestra with the film. This was accomplished, in part, through a specific, second-by-second time clock and a small video screen displaying, for the conductor, everything the audience was seeing on the big screen. One can only imagine the difficulty of coordinating all these elements for a live performance.

The film’s familiar plot surrounds the 1920’s Hollywood era during the conversion from silent movies to the “talkies.” Silent picture stars, Don Lockwood (Gene Kelly) and Lina Lamont (Jean Hagen) are well-known as the silent screen lovebirds “Lockwood & Lamont,” but in reality Lockwood scorns her, even though the annoying and hilariously whiny-voiced Lamont fantasizes that they are a couple with a real life future together. 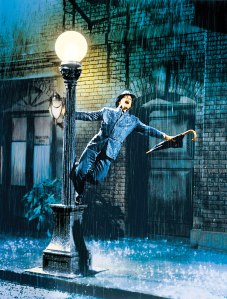 Gene Kelly in “Singin’ in the Rain”
PHOTO: Courtesy of the Gene Kelly Image Trust

Enter the lovely and talented young chorus girl, Kathy Selden (Debbie Reynolds), who quickly becomes the real love interest for Don. The amusing and lightweight romance that follows notwithstanding, a real star of the film is the music itself, with delightful tunes like “Fit as a Fiddle (And ready for Love), “All I Do is Dream of You,” “Beautiful Girl,” “You Were Meant for Me,” “You Are My Lucky Star,” “Good Morning,” “Would You?” and of course, the title tune, “Singin’ in the Rain.” In the role of Don’s longtime pal, Cosmo Brown, Donald O’Connor brings abundant hilarity with his acrobatic and comic antics in numbers like “Moses Supposes,” “Make ‘em Laugh,” and “Be a Clown.” Throughout the film the brilliant dancing of the cast is sensational, and never more so than in the climactic, “Broadway Melody Ballet.”

The magic is all there in the original film, but this stunning accompaniment by the Houston Symphony is just delicious icing on the cake. Why not see for yourself at tomorrow’s final performance, a 2:30 PM Sunday matinee? You can still get home in time for the Super Bowl.

HOUSTON SYMPHONY’S final performance of Singin’ in the Rain will be tomorrow, Sunday February 7th, 2016 at 2:30 PM. This big screen presentation will be accompanied by the live orchestra as it simultaneously performs the brilliant score of that memorable film starring Gene Kelly, Donald O’Connor and Debbie Reynolds.  Principal POPS Conductor Designate, Steven Reineke, will conduct. For tickets and information about this and other upcoming concerts, call The Patron Services Center at (713) 224-7575, or visit the website at www.houstonsymphony.org.

David Dow Bentley III, writes columns about the performing arts which are featured in newspapers from the East Coast to the Gulf Coast. A member of the American Theatre Critics Association (ATCA), The International Theatre Critics Association, and America's oldest theatrical club, The Lambs, he also had long service as the editor of The Lambs' Script magazine. Mr. Bentley may be contacted via e-mail at ThePeoplesCritic3@gmail.com.
View all posts by The People's Critic →
This entry was posted in BroadwayStars.com, Classical Music, Concert Reviews, Debbie Reynolds, Donald O', Donald O'Connor, Gene Kelly, Houston Symphony, Jean Hagan, Jones Hall, Singin' in the Rain, Steven Reineke, ThePeoplesCritic.com and tagged Classical Music, concerts, Houston Symphony, musicals. Bookmark the permalink.

1 Response to A Symphonic SINGIN’ IN THE RAIN