MCPAS Offers a Whirling Good Time from THE SPINNERS 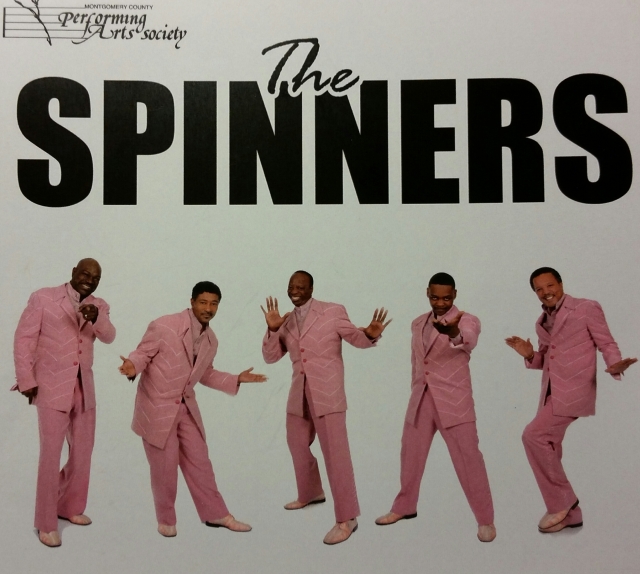 Last Saturday it was Opening Night for the 37th season of the Montgomery County Performing Arts Society, and the five dazzling stars of the evening comprise the rhythm & blues singing group, THE SPINNERS, that continues to enjoy wide popularity more than half a century since first forming back in the 1950’s. Of course like many vocal groups with longstanding popularity, the membership of the group has continued to evolve through the years, but the current talented group includes original member Henry Fambrough, in addition to tenor/lead singer, Charlton Washington, high tenor, Marvin Taylor, tenor, Ronnie Moss (whose stunning talent for falsetto singing would totally amaze the audience), and Jessie Peck, whose rich, deep bass voice could have made him a star in broadcasting (while his gift for break-dancing might have landed him on Dancing With the Stars). No wonder this group has accumulated a legacy of six Grammy nominations, gained entry into the Vocal Group Hall of Fame (1999), and been awarded the Rhythm & Blues Foundation Award.

Right out of the gate this group was the best example of high-energy and joyful performing that I can ever recall. They are aptly named The Spinners because their whirling and perfectly synchronized choreography is non-stop throughout the show. Luckily, they have selected sensible and attractive white cotton pinstriped suits with half-sleeves and open jackets over black tee shirts that seemed to keep them cool in spite of the athletic workout of their intense performance. 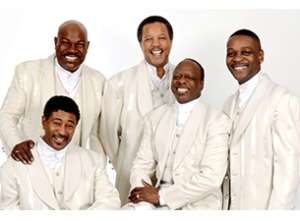 With their powerhouse 5-piece band led by Keith Ferguson, it was not long before I found myself thinking of the old Fats Waller tune, “The Joint is Jumpin’.” Certainly the Crighton Theatre was jumpin’ as fans danced in the aisles and clapped along to countless Spinners hits that included, “It’s a Shame,” “Could It Be I’m Falling in Love,” “Mighty Love,” “Then Came You,” “Sadie,” “Working My Way Back to You,” “Cupid,” “Funny How Time Slips Away,” and “The Rubberband Man,” which featured some playful antics as the group did their stretching exercises with giant rubber bands that were finally tossed to the cheering crowd.

For all the evening’s delights, there was one notable drawback. I have long suspected that touring group audio engineers have already blown out their own eardrums and have no concern for those of the audience. This show was a classic example, and it was sad because these five gents have FABULOUS voices that were constantly being distorted by volume levels that could have forced confessions from the prisoners in Guantanamo Bay. In the eyes (and ears) of this critic, such excess is a disservice to the talented artists and the audience as well.

A TRIBUTE TO FRANK SINATRA, starring Steve Lippia & a ten-piece orchestra, will be the next offering from The Montgomery County Performing Arts Society. The performance will be at Conroe’s Crighton Theatre on Saturday November 7th at 7:30 PM. For tickets & information visit the website at www.MCPAS.org, or call 936-441-7469.

David Dow Bentley III, writes columns about the performing arts which are featured in newspapers from the East Coast to the Gulf Coast. A member of the American Theatre Critics Association (ATCA), The International Theatre Critics Association, and America's oldest theatrical club, The Lambs, he also had long service as the editor of The Lambs' Script magazine. Mr. Bentley may be contacted via e-mail at ThePeoplesCritic3@gmail.com.
View all posts by The People's Critic →
This entry was posted in BroadwayStars.com, Concert Reviews, Conroe Courier, Crighton Theatre, Houston Community Newspapers online, The Courier Columns, The Spinners, ThePeoplesCritic.com and tagged The Spinners. Bookmark the permalink.