THE MUSIC MAN: Fresh as Ever at Theatre Under the Stars

Anthony Crane as Harold Hill and Sara Jean Ford as Marian Paroo with cast. Photo by Bruce Bennett, courtesy of Theatre Under The Stars.

Like the seasons of the year, there are some things in life that just seem to keep returning with a certain regularity. Thankfully, Meredith Willson’s brilliant musical, The Music Man, is a case in point. It would be rare for a couple of years to go by without a production of the show popping up somewhere nearby, and for a current example we have the very wonderful edition now being presented at Houston’s Hobby Center. Splendidly directed by Bruce Lumpkin, it beautifully captures the small town warmth and humor of the piece, while beautifully wrapping it all in the countless delights of Willson’s rich and varied musical score. (Musical Director, Jeff Rizzo, quickly showed his skill conducting the lush and lovely Overture). 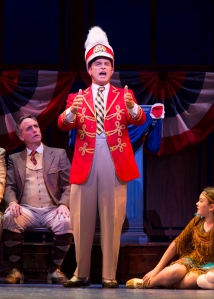 Anthony Crane as Harold Hill. Photo by Bruce Bennett, courtesy of Theatre Under The Stars.

The simple yet creative scenic designs of Martin Christoffel seem to outline this cheerful world, while the colorful costumes of Colleen Grady combine with the bright lighting designs of Richard Winkler to produce the warm and inviting hometown atmosphere of River City, Iowa in 1912. For many of us, it’s a place we would love to be, even if just for these two delightful hours.

The lighthearted plot, (familiar to many from the classic film starring Robert Preston in the title role), brings us the misadventures of traveling salesman and notorious con artist, Harold Hill, played here with high energy and comic flair, by J. Anthony Crane. Hill arrives in town by train during the highly unusual opening number, “Rock Island,” which neatly captures the locomotive tempo via a carload of singing traveling salesmen.

Anthony Crane as Harold Hill and Ensemble students from TUTS’ Humphreys School of Musical Theatre. Photo by Bruce Bennett, courtesy of Theatre Under The Stars.

One of their number, salesman Charlie Cowell, alerts the others to rumors of a notorious salesman calling himself Professor Harold Hill, and giving local salesmen a bad reputation with his unethical sales methods.

Peter Chursin as Tommy Djilas with Ensemble students from TUTS’ Humphreys School of Musical Theatre. Photo by Bruce Bennett, courtesy of Theatre Under The Stars.

Dink O’Neal brings bombastic fun to the role of Cowell. It is not long before Harold is circulating in River City to convince the townsfolk of their need for a boys marching band, with the ultimate goal of selling them band uniforms and instruments before skipping town himself without teaching anyone a single note of music. Complicating matters is Harold’s encounter with the town’s young music teacher and librarian, Marian Paroo (Played here by the lovely and silken-voiced, Sara Jane Ford). Mrs. Paroo, Marian’s feisty Irish mother, is eager to get her daughter married and is delightfully played by Mary Vanarsdel.

As Marian’s lisping little brother, Winthrop, Christopher Wolff brings a stunning, high soprano voice to the party that could etch the most delicate crystal with its powerful purity during numbers like the “Wells Fargo Wagon,” and “Gary, Indiana.” 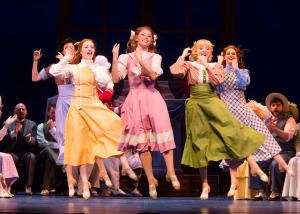 Kristen Paulicelli as Zaneeta Shinn and Ensemble Ladies. Photo by Bruce Bennett, courtesy of Theatre Under The Stars.

The ensemble chorus that supports such showstoppers could not be better, and that was evident right from the tongue-in-cheek fun of the townspeople singing the opening song, “Iowa Stubborn.” Throughout the show the whirling and eye-popping choreography is beautifully executed in one number after another by this very talented cast. (Choreographer, Michelle Gaudette).

As he proceeds with his scam, Hill finds a compatriot in an old friend named Marcellus (Dylan Goodwin). They pair pleasantly for the reflective, “Sadder-But-Wiser Girl,” and Mr. Goodwin later lights up the stage with the lively and nutty Act II number, “Shipoopi.” Mr. Crane gives us a suitably devilish Harold Hill with the tune, “Trouble,” and explodes with energy leading the youngsters in the familiar, “Seventy-six Trombones.” But there is quite a vocal contrast when his very adequate voice is paired for duets with the soprano magnificence of Miss Ford. The bird-like purity of her voice brings dreamy excellence to, “My White Knight,” “Goodnight My Someone,” and the memorable, “’Till There Was You.” There is also a charming trio when Marian joins her young piano student, Amaryllis (Annie Shouse), and Mrs. Paroo as they sing, “The Piano Lesson.”

THE SCHOOL BOARD: Thom Culcasi as Ewart Dunlop, Charles Swan as Oliver Hix, Joseph Torello as Olin Britt and Phil Gold as Jacey Squires. Photo by Bruce Bennett, courtesy of Theatre Under The Stars.

The musical is full of delightful characters such as the four clashing gents on the local School Board. With Harold’s wily help, they find unity by forming a very mellow barber shop quartet that offers terrific renditions of “Goodnight Ladies,” and “Lida Rose.” That latter number was joined in such exquisite counterpoint with Marian’s, “Will I Ever Tell You?” that it must be considered a musical highlight of the production. And speaking of Marian, Professor Hill serenades her in the library with a somewhat whiny, “Marian the Librarian,” that is far from a musical highlight of the show, but evolves into some of the best choreography as the youngsters in the library come slowly to life from reading their books to looking like a lively dance scene from West Side Story. 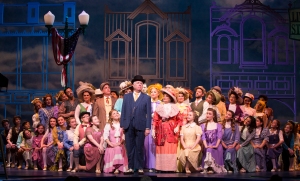 Kevin Cooney as Mayor George Shinn and Chesley Ann Santoro as Eulalie Shinn with full cast. Photo by Bruce Bennett, courtesy of Theatre Under The Stars.

For comic relief we have the hilarity of the town’s blustering Mayor Shinn (Kevin Cooney), his nutty wife, Eulalie (Chesley Ann Santoro), and her band of Pickalittle Ladies preparing a very amateur theatrical for the town’s 4th of July festivities.

The fun never really stops, and Act II has been said to be even more delightful than Act I. But any way you slice it, this 1957 Tony Award winner for Best Musical, deserves its place as an American musical theatre classic. Don’t make the mistake of those who might think of it as a corny piece of Americana. It is so very much more!

THE MUSIC MAN continues through May 17th at Houston’s Hobby Center main stage with performances on Thursday at 7:30 pm, Friday and Saturday evenings at 8pm, Saturday and Sunday matinees at 2pm, and a final performance next Sunday evening at 7:30 pm. For tickets visit the website at www.TUTS.com, or call (713) 558-8887 locally and (888) 558-3882 (outside of Houston).

David Dow Bentley III, writes columns about the performing arts which are featured in newspapers from the East Coast to the Gulf Coast. A member of the American Theatre Critics Association (ATCA), The International Theatre Critics Association, and America's oldest theatrical club, The Lambs, he also had long service as the editor of The Lambs' Script magazine. Mr. Bentley may be contacted via e-mail at ThePeoplesCritic3@gmail.com.
View all posts by The People's Critic →
This entry was posted in Broadway, BroadwayStars.com, Conroe Courier, HERE HOUSTON-Lifestyle & Entertainment, HereHouston.com, Houston Community Newspapers online, Houston's Hobby Center, Meredith Willson, The Music Man, The Villager Columns, ThePeoplesCritic.com and tagged Broadway, Meredith Willson, The Music Man, Theatre Under the Stars. Bookmark the permalink.

8 Responses to THE MUSIC MAN: Fresh as Ever at Theatre Under the Stars