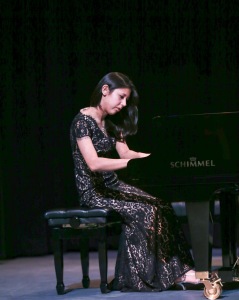 As the Young Texas Artists music competition entered its fourth decade of showcasing the very finest of our state’s young, classical musicians, it would be no surprise that last Saturday night’s eight 2015 finalists would epitomize musical excellence for the packed house in attendance at Conroe’s elegant Crighton Theatre. For three days some 70 candidates had competed for this opportunity to display their talents for the annual Finalist’s Concert & Awards program. For lovers of the arts in the Lone Star State, this official Texas music competition is one of the most anticipated events of the year. It is also a time for YTA’s most active supporters to attend the annual Bach, Beethoven & Barbeque Gala, which this year honored Lee and Shirley Pruitt for their many contributions to both YTA and the Montgomery County Performing Arts Society.

The guests gathered in a grand party tent that filled the entire street in front of the theatre on this special night of nights. Prior to the concert, the guests mingled for a cocktail hour and were then served a sumptuous feast prepared by Texans BBQ & Catering. While there was actually no Bach or Beethoven to accompany the delicious barbeque, there was plenty of festive fiddling from Bill Mock’s country band adding to the fun. Then an exciting, fund-raising YTA auction would conclude just in time for the evening’s concert, hosted by Houston Public Media’s St. John Flynn of KUHA Classical 91.7FM. Revelers would later reunite “under the big top” for post-concert coffee, champagne and dessert. 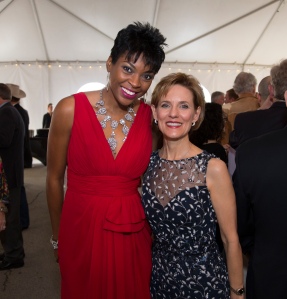 As she has for several years, Emelyne Bingham of Vanderbilt University again served as YTA’s Artistic Director, and Susie Pokorski continued to bring boundless energy to her role as Chair of this prestigious event held under the auspices of the Montgomery County Performing Arts Society. Again this year a special highlight of the night would be the onstage interviews with the contestants conducted by concert pianist and former YTA winner, the very beautiful Jade Simmons. Dressed in a sleek and elegant scarlet gown that may have been the most splendid of the night, the statuesque and charming Miss Simmons demonstrated a spontaneous gift for eliciting informative conversation from the nervous participants that should win her a talk show of her own.

With prize money totaling $20,000, finally it was on to the evening’s competition with Silver Medal winners taking home $1,000 prizes, and Gold Medal winners each being awarded $3,000. Performing in the Winds, Brass, Percussion, Harp and Guitar division were Adam Gingery on euphonium and Grace Browning on harp. Mr. Gingery was accompanied on piano by his wife, Erika, as he performed “Zigeunerweisen” by Pablo Sarasate/Frey. It was an always elegant, sometimes playful display of the deep, rich sounds of an unusual instrument that seemed able to echo itself while beautifully merging its mellow tones. Gingery would win the category’s Silver Medal. 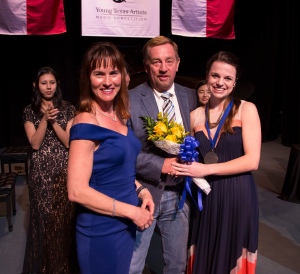 Meanwhile, dressed in a striking black and coral gown, Miss Browning would dazzle the crowd with her astounding skill on the harp, surrounding the instrument with an almost romantic embrace while performing the myriad complexities of “Scintillation” by Carlos Salzedo. In this work full of unpredictable and sometimes hypnotic intervals, she captured the whispering opening phrases as delicate as raindrops, but could transition skillfully to the composition’s building power and pulsations, all the while maintaining a focused intensity that was remarkable. She would have that division’s Gold Medal for her reward.

In the Voice Division, soprano, Megan Gryga, brought theatrical and vocal excellence to her joyful performance of two operatic selections: “Como Scoglio” from Mozart’s Cosi fan tutte, and “Depuis le jour” from Charpentier’s Louise. Gryga had an immediate connection with her audience, and one could almost visualize the invisible opera cast members to whom she was singing. The judges awarded her the category’s Silver Medal. Capturing the Gold Medal in this division would be tenor, Galean Salas, for another warmly theatrical performance featuring two opera favorites: Puccini’s, “Che gelida manina” from La Bohème, and Gounod’s “Ah, lève-toi soleil,” from Roméo et Juliette. Mr. Salas’ richly resonant voice combined with his cheerful countenance and animated gestures to make us feel language was no barrier in his fine performance. In addition to his $3,000 prize, he was awarded the $1,000 Audience Choice Award via ballots submitted from the crowd during the judges’ final deliberations. 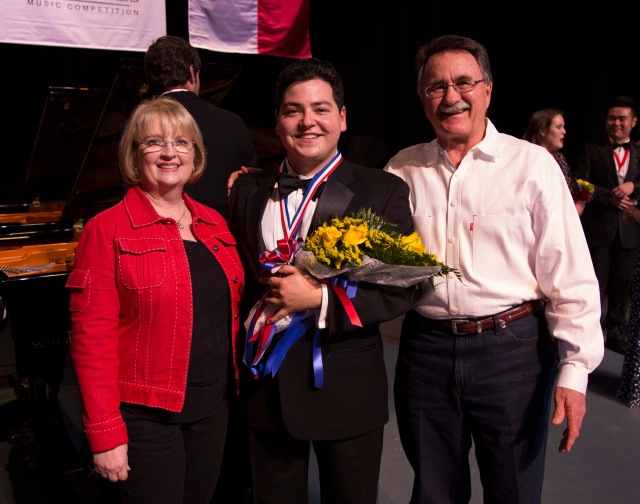 Competing in the Strings Division were Mingyao Zhao (violoncello) and Jihyun Kim (violin). Miss Zhao came onstage in a soft and flowing gown of eggshell blue and quickly displayed her technical virtuosity bringing a brisk and authoritative attack to the galloping intensity of the Shostakovich Concerto No.1 in E-flat major, Op. 107. The division’s Silver Medal would be hers, while the Gold Medal would go to Miss Kim following her impressive performance of the richly romantic Sibelius Concerto for violin and orchestra in D minor, Op. 61. Her lovely evening gown was highlighted by a glittering silver accent as flashy as her fine musicianship, and as she coaxed warm and wonderful tones from the instrument, one suspected that the quality of the violin was as exceptional as the artist herself.

The Piano Division was hotly contested between Yibing Zhang and Yurie Farnsworth. Performing the “Presto—Molto allegro e vivace” from Mendelssohn’s Concerto No.1 in G minor, Op. 25, Mr. Zhang displayed immediate power and fluidity. The prancing delicacy of his fingering one moment would alternate with precise and thunderous attack the next, as he skillfully moved toward a beautiful execution of the thrilling conclusion that would help to win him the Silver Medal. Miss Farnsworth would close the evening’s offerings with her elegant performance of the “Andantino semplice” and “Allegro con fuoco” from Tchaikovsky’s Concerto No.1 for piano in B-flat minor. From the enchanting opening, the familiar theme subtly draws us in before the work takes off in new and wondrous directions in Farnsworth’s talented hands. It was a thrilling and rapturous performance propelled by a kind of technical wizardry on the keys that we mere mortals might think of as impossible had we not seen it with our very own eyes. Perhaps the event organizers had inadvertently “saved the best for last,” as Farnsworth would not only win the Gold Medal award, but also the evening’s Grand Prize, an additional $3,000!

To learn more about the Young Texas Artists Music Competition, visit the website at www.ytamc.net. For further information e-mail info@ytamc.net

1 Response to Excellence Abounds at YTA Concert of Finalists