Even before the opening curtain, there was a ballet of sorts in the Wortham Center’s soaring lobby, with its steep and rolling escalator, towering windows, and the high walls adorned with beautifully projected scenes from Houston Ballet’s current repertoire. It almost seemed a kind of modern dance as these elements all combined to grandly welcome the throngs of arriving guests for the Opening Night performance of the company’s elegant production of Sergei Prokofiev’s Romeo and Juliet. But the best was yet to come.

As a young lad, the first ballet I ever attended was Prokofiev’s Cinderella, and I would be in high school before becoming acquainted with the similarly rich and haunting music of the Romeo and Juliet. It would have been in itself worth the price of a ticket just to hear this score performed by the peerless musicians of the Houston Ballet Orchestra, under the loving baton of maestro Ermanno Florio (Music Director). But to see Shakespeare’s classic tale of love and tragedy unfold in the splendor created here by Artistic Director & Choreographer, Stanton Welch and his brilliant team, would seem at times more like a beautiful medieval dream than a reality.

The exquisite costume and scenic designs of Roberta Guidi Di Bagno give the production the look of having popped out of some lush and ancient tapestry of the period. Rich colors abound and are endlessly enhanced by the varied lighting designs of Lisa J. Pinkham. Thus, we are magically transported to the world of ancient Verona and this enduring saga of the rival families, the Montagues and Capulets.

As the ballet begins, graceful young maidens dance about, but the youthful Romeo (Connor Walsh) is love-struck and infatuated with the lovely Rosaline (Sara Webb), even though she is a Capulet and he, a Montague. The action moves to the merry excitement of the beautifully staged Market Scene. As the stage begins to fill with arriving townspeople weaving amongst one another in the marketplace, the eye-popping choreography of both dance and simple movement suggests the precision of the finest college marching band on the gridiron. Romeo’s friends, Benvolio (Oliver Halkowich) and Mercutio (Jared Matthews) try to cheer the brooding Romeo, and there is some lusty and high-energy dancing from the threesome and the wonderful ensemble. From the dullard, Peter, (an amusing portrayal by Hayden Stark as a bumbling Capulet servant) Romeo learns the Capulets plan a grand ball. The family has actually planned the ball to bring daughter, Juliet (Karina Gonzalez), together with the eligible young Paris (Ian Casady). Meanwhile, Romeo plans to crash that party so he can be near Rosaline. But soon conflict arises at the market between members of the opposing families. The fiery Tybalt (Christopher Coomer), a temperamental Capulet nephew, provokes a street brawl between the young men of these families.

The neatly choreographed and swashbuckling swordplay that follows is full of excitement worthy of an Errol Flynn film. There is a powerful performance from Simon Ball as Escalus, the Prince of Verona, and it is Escalus who impressively steps in to demand that the brawling cease.

As the action shifts to Juliet’s chambers, the mood is brightened by her cheerful dancing and that of her attendants and playful Nurse (Barbara Bears in a charming and lighthearted performance). It is there that Juliet’s mother, Lady Capulet (Jessica Collado), gives her the news that Paris will be a guest at the special ball being planned. As the ball guests arrive, Prokofiev’s regal music embraces the audience while stunning tapestries look down from the walls above. 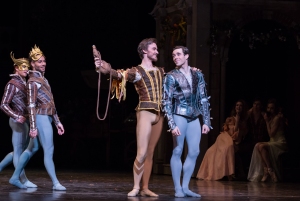 The entrance hall for the ball is richly aglow with lushly beautiful costumes, generously anointed by dramatic blood-red colors. Amid the excitement, Romeo and his friends, Benvolio and Balthasar (Derrick Dunn), sneak into the ball where Romeo is instantly enchanted by his first glimpse of Juliet, even as she discovers her own fascination with this handsome young stranger. The lads glide gracefully through the scene with the synchronization and lively designs of their athletic dancing illuminating their joyful camaraderie.

The ball opens with the ominous power of one of the composer’s most memorable themes, and the dramatically impressive choreography here is every inch the equal of the powerful music. The scene is an unforgettable highlight in the production, and it was notable that the light and airy fabrics of costumes on the dancing ladies created wonderful visuals as they seemed to allow the gowns to whirl about doing a beautiful dance of their own. Soon we see the first warm embrace of Romeo and Juliet, and the romantic magic of this pairing is perfectly captured by the beautiful Miss Gonzalez and the handsome Mr. Walsh. Nevertheless, when Tybalt discovers Romeo is present he reaches for his sword and is only kept in check by intercession of the host, Juliet’s father, Lord Capulet (Linnar Looris).

In the iconic balcony scene, amid the lovers’ tender yet fearful connection, the warmth of Prokofiev’s romantic score embraces them as they sweetly dance together. The dance lifts are lovely and beautifully executed by Walsh, and all the while the two are surrounded by a glittering starry sky. With the aid of Friar Lawrence (Steven Woodgate) and Friar John (Rhodes Elliot), a clandestine wedding for the lovers is quickly arranged, with plans to secretly consummate the marriage that night in Juliet’s bedroom where the soaring canopied bed is the dramatic centerpiece on the stage. Plans are greatly complicated during the festive and colorful Carnival scene. Now married, Romeo tries to avoid combat with his unaware new in-law when Tybalt, sword in hand, again challenges him. Murcutio intercedes, but is fatally wounded by Tybalt. Enraged at the murder of his friend, Romeo stabs Tybalt, killing him in revenge, and escaping the wrath of Prince Escalus by retreating to the bedroom of his secret bride for what will be a last night of bliss.

The final act has Romeo in the role of fugitive, and Friar Lawrence supplies Juliet with a potion that will cause her to appear as dead until Romeo can rescue her from the tomb for their escape. A message is sent to Romeo with the plan’s details, but it never reaches him. Meanwhile, Lord and Lady Capulet prevail upon Juliet to marry Paris, and their daughter relents thinking she will soon escape that fate with her beloved. Following Lady Capulet’s horrifying discovery of her lifeless daughter’s body on the bed, a dramatic and candle-lit funeral procession crosses the stage as word reaches Romeo of Juliet’s “death.” The funeral over, he enters the shadowy crypt to find the grieving Paris, who then attacks him. Romeo stabs him to death in self-defense, and then takes poison himself upon discovering his lifeless bride. As Juliet awakens to find her lover dead, she takes her own life with the knife, and the lovers’ bodies intertwine in tragic death. How ironic that at that moment, the audience erupted with an extended ovation of joyous applause and appreciation for the masterpiece of dance it had just witnessed. Bravo!

Houston Ballet’s ROMEO and JULIET continues through March 8th at the Brown Theater in the Wortham Theater Center, 501 Texas Avenue in downtown Houston. Evening performances are at 7:30 pm on February 28th and March 6th & 7th. In addition there will be a 1:30 pm matinee on February 28th, and 2:00 pm matinees on March 1st & 8th. For tickets & information visit www.houstonballet.org or call (713) 227 ARTS or 1 800 828 ARTS

The columns of David Dow Bentley III have appeared in newspapers from the East Coast to the Gulf Coast and may be viewed online at the website: www.ThePeoplesCritic.com E-mail may be directed to ThePeoplesCritic@earthlink.net .

David Dow Bentley III, writes columns about the performing arts which are featured in newspapers from the East Coast to the Gulf Coast. A member of the American Theatre Critics Association (ATCA), The International Theatre Critics Association, and America's oldest theatrical club, The Lambs, he also had long service as the editor of The Lambs' Script magazine. Mr. Bentley may be contacted via e-mail at ThePeoplesCritic3@gmail.com.
View all posts by The People's Critic →
This entry was posted in BroadwayStars.com, HERE HOUSTON-Lifestyle & Entertainment, HereHouston.com, Houston Ballet, Houston Community Newspapers online, Houston's Hobby Center, Romeo and Juliet, Segei Prokofiev, The Courier Columns, ThePeoplesCritic.com, YourHoustonNews.com and tagged Dance, Houston Ballet, Romeo and Juliet, Segei Prokofiev. Bookmark the permalink.