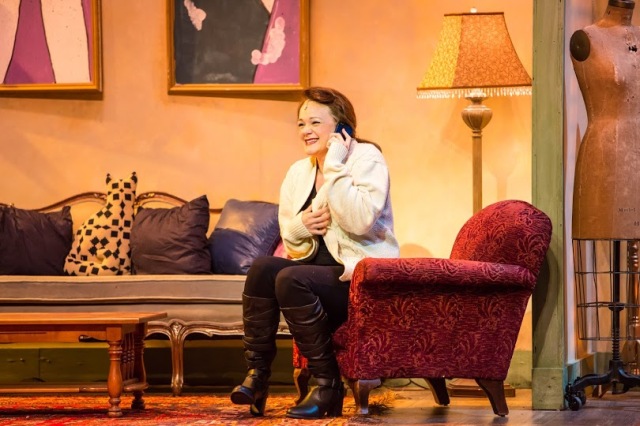 Brooke Wilson as Rita Donatella
ALL PHOTOS By Christian Brown

Neatly tucked away in the smaller theater of Houston’s Hobby Center one can find the unusual offerings of the TUTS UNDERGROUND. The company self-describes its productions as, “…edgy, captivating, and occasionally a bit risqué,” and it lives up to that description with the current musical comedy/drama, Waiting for Johnny Depp. With shrewd musical direction from conductor, Jack Beetle, the show features book, music & lyrics by Janet Cole Valdez & DeeDee O’Malley, and musical arrangements from co-composer, Bettie Ross. Advance publicity has declared the show to be, “Quirky, flighty, and a little bit crazy.” Again, correct on all counts, but we could easily add the word fun to that list. As for “risqué,” I guess that was verifiable when, at one point, the audience found itself being chorally directed in a cheerful sing-a-long of a tune titled, “WTF.” Younger readers will no doubt recognize the significance of those three letters, and older readers are probably better off not knowing. No prudes need apply.

Starring in this one-woman show is the multi-talented Brooke Wilson, who very much owns the stage for the two hours that tell this tale of Rita Donatella, a struggling young actress in New York, who has abandoned her career in science laboratories (sewage and sludge engineering) to seek success in the theatre. We listen in as Rita has phone conversations with her demanding agent, (“change your hairstyle,” “go on a diet,” “lose that New York accent”), and her whining mother who does not like the idea that her daughter’s $60,000 education is being tossed aside for life upon the wicked stage. But Rita is determined, and determination is very much in order as she faces one obstacle after another in her quest for success.

The show’s title derives from exciting news received from Rita’s agent in the opening scenes. It appears the young actress is being selected to star in an upcoming movie with film legend, Johnny Depp. 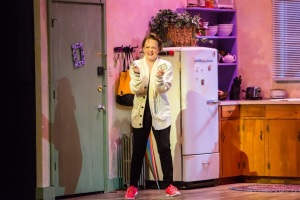 The excitement builds as she awaits final details on that project, but it can be very expensive waiting around in New York City. Meanwhile, to afford keeping her modest apartment (pleasant scenic design from Matthew Schlief), Rita begins gleefully selling off all her possessions while singing the witty song, “Craigslist.” One by one she optimistically surrenders lamps, appliances, furnishings, and paintings to raise the cash needed to hold on to her now barren apartment. Finally, while awaiting her anticipated big break, she is left with little but her simple rehearsal clothes and hot pink sneakers (costume designer, Coleen Grady). When all else fails she dabbles in tawdry part-time opportunities with singing telegrams or phone sex, and even auditions for a ridiculous play. Adding to the fun is the way the play frequently eliminates the theatrical “fourth wall” as Rita merrily addresses the audience directly, even briefly interacting with audience members on several amusing occasions.

Miss Wilson brings tremendous energy to the piece whether Rita is

A Take-off on Marilyn Monroe
PHOTO by Christian Brown

doing her aerobics, whirling in a ribbon dance, mimicking Marilyn Monroe’s famous scene on the subway grate, or taking a flight of fancy as she imagines accepting a major acting award. (With the “trophy” represented by the whiskey bottle she sometimes retreats to when times are tough). We learn about the generosity of her big brother Tony helping her through the rough times, and that comprises one of the more touching parts of the often-hilarious play. I noticed a woman seated near me in the theater was sobbing during that poignant sequence. 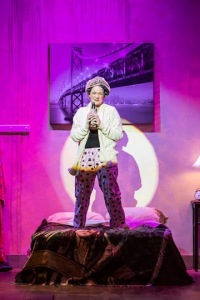 With a generally witty script and an eclectic assortment of pleasant tunes, it is worth noting that a few songs rose above the prevailing silliness to a level that might do well if recorded by contemporary pop or country singers. Rita’s determination is well-displayed in, “Anything for My Craft,” there is genuine warmth in the tender, “Flowers From Phoenix,” and a hopeful optimism characterizes the song, “This Time.” And there was one last musical surprise as Musical Director, Mr. Beetle, always onstage at his piano, suddenly joined Wilson for a pleasing duet of the lovely, “What Really Matters.” If you’re not a prude, you may want to find out more about what really matters by attending one of this week’s remaining performances.

WAITING FOR JOHHNY DEPP concludes with Houston Hobby Center performances this week on Thursday at 7:30 p.m., Friday at 8:00 p.m., and a final performance on Saturday, January 31st at 8:30 p.m. For tickets call 713-558-8887, or visit the website at www.TutsUnderground.com.

David Dow Bentley III, writes columns about the performing arts which are featured in newspapers from the East Coast to the Gulf Coast. A member of the American Theatre Critics Association (ATCA), The International Theatre Critics Association, and America's oldest theatrical club, The Lambs, he also had long service as the editor of The Lambs' Script magazine. Mr. Bentley may be contacted via e-mail at ThePeoplesCritic3@gmail.com.
View all posts by The People's Critic →
This entry was posted in BroadwayStars.com, Houston's Hobby Center, Johnny Depp, Theater Reviews, Theatre Under the Stars, ThePeoplesCritic.com, TUTS Underground, Waiting for Johnny Depp and tagged comedy, johnny Depp, musicals, Theatre Under the Stars, TUTS Underground, Waiting for Johnny Depp. Bookmark the permalink.