I had to be in a good mood last Friday night after a dear friend treated me to dinner at Perry’s Grill where the salmon was divine and the service from our waiter, Joe, was first-class. Then it was time to go to “work” at the Owen Theatre and view The Players Theatre Company’s production of William Inge’s BUS STOP. Now in my role as critic I most often avoid opening nights with the goal of giving actors that opportunity to work out the kinks that may appear when first confronted with an audience. A crowded weekend schedule prohibited me from affording this play that usual courtesy, so I found myself attending the first performance. That would present some issues, but not to worry.

The action of the play is aptly described by the title. Everything takes place in the pleasantly rustic coffee shop of a midwestern bus stop along the route to Montana (Set designer, Don Hampton). Soft blue lighting illuminates the raging snowstorm outside the shop window. (Lighting Designs, Scottie Smith, Sound Designs, Mike Ragan). The cast of eight includes Marilyn Moore as Grace, the feisty manager of the coffee shop. She is happily estranged from her husband, but as she relates, “Every now and then I gotta have a man just to keep me from getting grouchy.” Grace is delightfully assisted with the waitress duties by a shy, naïve and academically gifted high school girl named Elma (a sweetly joyful portrayal by Jacque Dowell). Mark Wilson nicely plays the no-nonsense town sheriff, Will, who doesn’t like any bad behavior at the bus stop.

And then the bus arrives amid this serious snowstorm that will delay its run. We meet the cheerful driver Carl, (warmly played by John McDonald). Carl has eyes for Grace and that feeling is mutual, as the audience will learn. Arriving bus passengers include elderly Dr. Lyman (Allen Doris), a verbose and rather intellectual college professor of literature whose wife left him three years ago. He has fallen on hard times with some help from whiskey and a few other bad habits. Then there are a couple of ranch hands, Bo (Brian Heaton) and his sidekick, Virgil (Bill Torgan). Bo is pretty full of himself and has been essentially stalking our last passenger, lovely but not-to-bright nightclub singer Cherie (pretty Cristy Campobella). The two had shared a recent one-night stand and Bo has made up his mind that they will marry and take this bus to their new life on his ranch in Montana. Cherie is having none of it.

It was when Bo and Cherie arrived on the scene that I became concerned there might be a problem. Miss Campobella may have at first had some opening night jitters that put her into overdrive in an effort to project an excessively ditzy, hysterical persona for Cherie. She adopted an extremely squeaky voice that reminded me of Betty Boop and paced about the stage with pinched face, squinty rolling eyes and hands and arms flailing. True, Inge’s character is distraught by Bo’s unwanted advances, but Cherie is a real and many-dimensional person and not a cartoon. Mr. Heaton’s performance as rough and tumble Bo began with blustering overkill of its own as he at first brought so much arrogant energy to the characterization it bordered on the unrealistic. Together the two were over-the-top, though clearly, as the play is written, there is intense tension between those characters. But there are limits.

The good news is that both Heaton and Campobella soon discovered those limits, settled beautifully into their roles and really won the audience (and me) over as the play progressed. Bo and the audience begin to discover his “tender” nature as he calms his brashness. Meanwhile we begin to see the sensitive and very sweet nature of Cherie, who has much more to offer than just being a temperamental dancer from a cheesy nightclub. But don’t miss the group’s talent show (delightfully emceed with giddy glee by Elma with a winning performance from Miss Dowell). Dressed in one of designer, Michael Hayes’ fine costumes, Cherie’s hilariously bad rendition of “That Old Black Magic,” is a campy riot. What fun, and what varied uses for a feather boa!

For even more fun at this bus stop, Elma and the professor combine their talents for a balcony scene from Romeo and Juliet that the Immortal Bard could never have imagined. 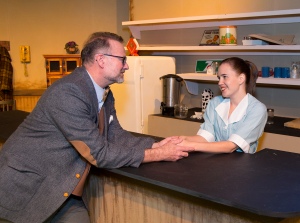 The professors’s flirtations with young Elma, while inappropriate, seem to have a sweetness of their own. But his flirtations with the bottle will bring him down in more ways than one. Both Miss Dowell and Mr. Doris create characters we can really care about. As for director, Joe Viser, he has gone one step further and given us a production we can really care about. Bravo!