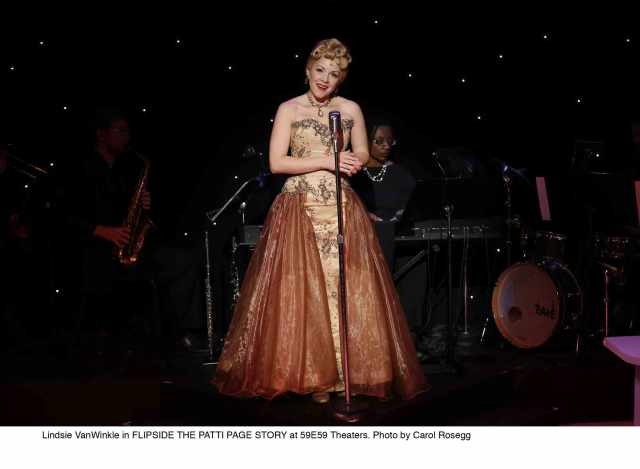 Like many New Yorkers, my world has not been untouched by the still ongoing effects of the now notorious Hurricane Sandy, which, for some time, have sidelined my work as a critic. For my return to the fold, I tried to choose a production with upbeat potential. It seems I chose wisely with FLIPSIDE The Patti Page Story. Conceived, created and directed by Greg White, we have here a pleasant mix of background storyline and 28 songs associated with the popular singer. This little gem is already selling out much of its limited run, so I hope readers are not disappointed if they attempt acquiring tickets.

Patrons arriving early can enjoy a projected running slide show of photos from Page’s years in show business. There are publicity stills, sheet music copies, magazine & album covers, and lots of shots of Page with such noted celebrity friends as Bob Hope and Burt Lancaster.

An eager buzz permeates the room, and when the curtain rises the show employs an unusual theatrical device as Haley Jane Pierce portrays Clara Ann Fowler (Patti’s reflective and more contemporary older self), while attractive Lindsie VanWinkle portrays the star during her more glamorous, pop-singing prime. Throughout the production, the two interact in ways that could at first be confusing until audience members realize that Clara was the star’s real name before she became known as Patti Page, “The Singing Rage.” A fine supporting cast (Willy Welch, Justin Larman, Jenny Rottmayer and Kassie Carroll) brings pleasant variety to the proceedings, with the gents in several bit roles and the gals primarily acting as backup singers for Miss Page.

The time is 1965, and the action takes place both at radio station KTUL in Tulsa, Oklahoma (set designer, Matt Avra), and also in the mind and memory of the mature Clara as she revisits the empty studio in which she got her career start so many years before.

As Clara reflects on the concert years that followed, each memory calls up a performance scene that brings the talented VanWinkle back to perform another of the star’s hits. Between songs, the narrative from Clara provides bits and pieces of Patti’s life story. We learn of her hardworking and loving father (tenderly portrayed by Welch), her sisters (played by Carroll & Rottmayer), her poor Oklahoma childhood in a family with 11 children, and her somewhat ruthless concert manager (a very animated Mr. Larman).

For her opening number, “It’s Been So Long,” VanWinkle arrived onstage in the first of a series of gorgeous costumes by designer, Corey Martin. Long black gloves and sparkling jewelry accented a shimmering teal & black evening gown, as a sky of blue stars twinkled above the stage (lighting designs by Laurel Shoemaker). Moments later VanWinkle was back in a sleek black gown with red lace accents, while she delivered a rhythmic and Latin-flavored, “All My Love,” and the twinkling stars turned to ruby red. Next came the merry gaiety of the familiar “Mockin’ Bird Hill,” as the backup singers joined VanWinkle dressed in matching pastel-striped summer frocks.

The number could have popped right out of a Lawrence Welk show. There was plenty of pizzazz for “Frankie & Johnny,” and “Don’t Sit Under the Apple Tree,” and a rich and pleasant “To Each His Own,” soon followed. VanWinkle joins Rottmayer for the lovely, “Oh What It Seemed to Be,” but at times there would seem to be a disconnect in the flow of the song as Clara and Patti alternate singing from their separate dimensions. There’s a sassy “Oklahoma Blues” duet, and a soft, warm, “Every So Often.” The gals produce swell harmonies in songs like, “With My Eyes Wide Open,” and the satisfaction could be enhanced if the two talented backup singers would tone down the coy grins and incessant synchronized gestures that seem to punctuate every syllable of the song. Songs of such quality can stand on their own without the need for excessive antics. Touches of silliness worked better with the fun-filled tunes, “Detour” and “How Much Is That Doggie In The Window?” Those numbers had the happy audience cheerfully clapping and singing along.

Another glamorous highlight is Patti’s arrival on stage in a glistening Cinderella ball gown of pale lavender as she delivers a velvet smooth, “Why Don’t You Believe Me? The wardrobe fun continues when she next appears in a smart and sparkling peach-colored pantsuit draped with soft yellow chiffon while singing a snappy, “I Don’t Care.”

We learn that Miss Page was a pioneer with her song, “Confess,” in which she developed the “over-dubbing” and echo techniques still so common in music today. She was unique as well in having her own TV shows appear on all three networks of the day. Her dad’s kindly influence (“Never forget who you are and where you came from”) seems always in the background until his death in 1963. Clara recalls affectionately, “He was a man of few words, but he loved to hear my voice.”

The girls bring more mellow harmonies to “Allegheny Moon,” and the lushly visual, “Old Cape Cod,” though our sometimes-hyper backup singers seemed to be twisting to each beat of the latter. The gentle vocal elegance of VanWinkle’s “You Belong to Me,” was every inch the equal of her beautiful beige & gold gown. There was the cheerful energy of “Back in Your Own Backyard,” and the jazzy fun of the lesser-known recording, “Boogie Woogie Santa Claus,” which surprised all by becoming a hit record due to the “simple and honest” flipside tune, the classic “Tennessee Waltz.” Here the number was a bit diminished with some dialogue interruptions and Patti at first staring vacantly on as Clara launches into the song before her. In a perfect world such a perfect song would be delivered just as written, but the delightful full cast finale of “This is My Song” quickly erased that minor complaint.

In a personal note that serves as preface to the printed program, Miss Page, (still active and performing today at age 85), writes as follows: “I often hear that a particular song or performance of mine continues to hold a special memory for someone.” That will probably never be truer than for lucky fans that are able to capture a ticket to “Flipside.”

David Dow Bentley III, writes columns about the performing arts which are featured in newspapers from the East Coast to the Gulf Coast. A member of the American Theatre Critics Association (ATCA), The International Theatre Critics Association, and America's oldest theatrical club, The Lambs, he also had long service as the editor of The Lambs' Script magazine. Mr. Bentley may be contacted via e-mail at ThePeoplesCritic3@gmail.com.
View all posts by The People's Critic →
This entry was posted in 59E59 Theaters, BroadwayStars.com, Concert Reviews, Off Broadway, Theater Reviews, ThePeoplesCritic.com and tagged Broadway, concerts, Flipside the Patti Page Story, music, musicals, New York, Off Broadway, Patti Page. Bookmark the permalink.