At the Cynthia Woods Mitchell Pavilion September began with a night of delightful Italian musical classics, and to be honest, the night would end with a cheering audience expressing its enthusiastic satisfaction. This was the Houston Symphony’s concert featuring guest vocalists, POPERAZZI. Founder, George DeMott, formed this talented trio in 2009, and the group is well known in Las Vegas and beyond. Their wide vocal range and extensive musical repertoire of “all things Italian,” would be on impressive display this
night. But wait; —- there was a problem that may have been overlooked by many. Specifically, the splendid voices of Mr. DeMott, Cody Shawn Gay, and Janien Valentine were to be so viciously over-amplified during the evening that at many points in the program audio distortion was the modus operandi. What on earth were the sound engineers thinking? With free mezzanine and lawn seating (sponsored by Woodforest National Bank and KPMG, LLP), and additional sponsorships from Houston Family Magazine and CultureMap, this over-amplification was an especially sad circumstance as the large audience included many who had probably never before enjoyed performances at the Houston Grand Opera or “The Met” in New York, where back in the 1960’s I first had the thrill of hearing world-class singers right on the stage in front of me. In this age of routinely blaring rock concerts, it is pathetic to think of the many Pavilion audience members who missed this opportunity to hear what pure vocal excellence could really sound like. In my opinion, these three artists could have stepped away from microphones during some of the selections and been heard quite well at the top of the lawn.

On a happier note, sound levels for the superb orchestra itself were very well managed, and one would expect no less under the fine musical direction of jocular Michael Krajewski, looking summer-crisp and cool in his white shirt. With just soft rainbow lighting as a stage backdrop the orchestra began with the immediate and pulsing thrills of R. Wendel’s arrangement, “Balli il Tarantella.” It was merry and joyful with playful accents from brass, woodwinds, and percussion, all neatly wrapped in the sound of the rich and mellow strings. 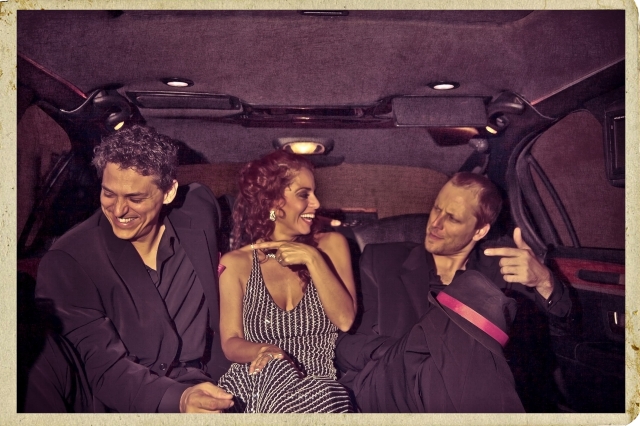 The talented trio appeared next to perform Verdi’s lusty and joyous “Drinking Song,” from La Traviata. Miss Valentine was in elegant voice (and equally elegant attire with her exquisite ink-blue satin gown) as she joined the gents in what could have been a sublime performance but for the aforementioned audio problems. Her delicately soaring rendition of Puccini’s “O mio babbino caro” from Gianni Schicchi suffered the same fate. With
authoritative power and focused intensity, DeMott stepped forward next for a thrilling, “Salute to the Italian Tenor,” that featured many numbers associated with the late, great, Luciano Pavarotti.

Next, with resounding brass a highlight, the orchestra offered the galloping delights and racing excitement of Rossini’s “Largo al factotum,” from The Barber of Seville. Krajewski introduced the piece by mentioning it would be familiar to many from Woody Woodpecker cartoons, but I heard an audience member near me say, “He’s wrong about that. It was Bugs Bunny.” Our three stars returned to the stage with lashing vocal power for a traditional favorite, “Funiculì-Funniculà.” The orchestra followed with Barton’s romantic arrangement of the old Dean Martin standard, “Volare,” that began with a sweeping waltz tempo for a summer evening, and then shifted tempos, styles and rhythms as it delightfully evolved into another Martin favorite, “That’s Amore.”

Dressed in a rich, rose-red dress and sexy matching scarf, Valentine then returned as seductress for a playful performance of, “Be Italian,” from the musical, Nine, with still more shrieking volume that even muddied the lyrics. But there were no audio problems when the orchestra superbly played the Rota/Prechel arrangement of Music from “The Godfather.”

Mr. Gay then took center stage for a tribute to Old Blue Eyes. Titled “Sinatra Suite,” it featured snatches of such hits as, “I’ve Got You Under My Skin,” “Fly Me to the Moon,” and “I Did It My Way.” While a passable performance, it offered new reasons to reflect on the unique subtleties of Sinatra’s vocal technique and cool delivery that allowed many of us guys to foolishly think, “I could do that.”

For the final set the formally dressed trio found Miss Valentine attired in a glittering burgundy dress overlaid with sequined lace as the three began with a medley titled, “Singing Italian Songs,” that featured some lightweight choreography that was neither memorable nor offensive. The next medley featured popular Jersey Boys selections like the hand-clapper, “Oh, What a Night,” but there was perhaps a bit too much in the way of cutesy (and probably exhausting) stage antics from the three principals. There was even a bit of jitterbugging from the energetic cast during Louis Prima’s fun-filled, “Jump Jive Boogie Woogie.” Then it was clearly “Time to Say Good-bye,” with the serene encore of “Con te partirò,” familiar to many from the world-wide hit performed by Andrea Bocelli & Sarah Brightman.

The Houston Symphony will close its summer season at the Cynthia Woods Mitchell Pavilion with a performance of “Brahm’s Violin Concerto” on Thursday September 15, 2011 at 8 pm. Mezzanine and lawn seating will again be complimentary. For tickets call 800-745-3000 or visit any Ticketmaster outlet.

David Dow Bentley III, writes columns about the performing arts which are featured in newspapers from the East Coast to the Gulf Coast. A member of the American Theatre Critics Association (ATCA), The International Theatre Critics Association, and America's oldest theatrical club, The Lambs, he also had long service as the editor of The Lambs' Script magazine. Mr. Bentley may be contacted via e-mail at ThePeoplesCritic3@gmail.com.
View all posts by The People's Critic →
This entry was posted in Broadway, Concert Reviews, Miscellaneous Reviews and tagged Broadway, Celebrities, classical, concerts, Entertainment, Houston, music, Reviews, Texas. Bookmark the permalink.