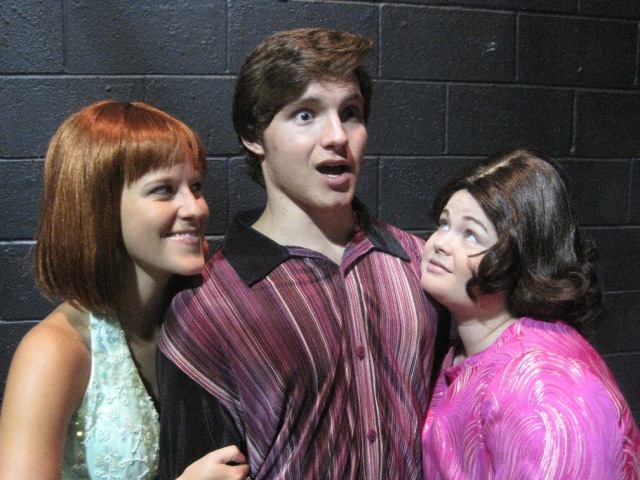 Readers familiar with the Broadway and movie editions of the delightful musical, HAIRSPRAY, probably need no reminders from me as to what fun that show offers. But I would have to say that in my experience the show has never been more fun than in the recent production from the Center For the Arts at Lone Star College-CyFair. Hairspray has a book by Mark O’Donnell & Thomas Meehan, music by Marc Shaiman, and lyrics by Mr. Shaiman & Scott Wittman. The musical is based on a non-musical John Waters film of the same name that was released in 1988. CyFair’s Hairspray was produced in conjunction with the Country Playhouse Theatre, and Ron Jones brilliantly directed this summer treat. With musical direction from Stephen W. Jones and the brilliant choreography of Daria James & Erin Robleto, the result was an eye-popping gem that could not have been better. My smile muscles were cramping by the time the show was over.

The fun would be non-stop right from the opening scene. Our teenage heroine, Tracy (a flawless performance from adorable Kalin Coates) is seen waking up in a cozy bed that is hilariously positioned center stage and fully upright against the charming 3-D pop out set of downtown Baltimore. (Designers, Carl Russell’s Sets & Props). 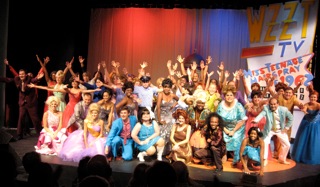 Miss Coates spearheads the joy as she beautifully sings the optimistic, “Good Morning, Baltimore,” and she has thrilling support from the beaming ensemble as the vibrant and lively cast joins her on stage sporting the lovely and colorful costumes of designer, Reba Kochersperger.

This musical is clearly a take-off on early television’s popular Dick Clark’s American Bandstand program from the early 1960’s. Tracy is one of the countless teens who hurry home from school to watch the Corny Collins Show at 4:00, hear the latest hit recordings, and envy the lucky teens that dance on the show each day.

Tracy’s favorite is handsome young Link Larkin (Aaron Boudreaux), and she has a considerable crush on him. The scene switches to the WZZT-TV studio as host, Corny Collins (Steve Bullitt in a deliciously upbeat portrayal) presides over the cast’s splashy theme number, “The Nicest Kids in Town,” while commercial breaks promote the show’s sponsor, Ultra Clutch Hairspray.

The action moves to Tracy’s home where she is watching the show with her girlfriend, Penny (perky Hayley Beimeister) and her mom, Edna. To add to the fun, the latter role is traditionally given to a male performer, and in this production Danny Seibert carries that campy fun to stratospheric levels, while never falling into the trap of overdoing it. His was a boldly wonderful performance. Edna is a big gal in more ways than one, and Seibert is a hoot flouncing about in a pink chenille bathrobe trimmed with satin as Edna does the washing and ironing of laundry she takes in from neighborhood customers. Edna’s genial husband, Wilbur (delightfully played by Brad Zimmerman) adds to the merriment and keeps busy as the proprietor of his own joke shop, the Hardy-Har Hut.

Next there is a sweetly staged “Mama I’m a Big Girl Now,” that tips its hat to adolescent growing pains and quests for independence. It showcases Tracy and Edna, Penny and her mother, Prudy, (one of three roles in the show for talented Katie Harrison),

and we meet Tracy’s soon to be rival for Link’s affections, his self-serving girlfriend, Amber (pretty Riley Branning) and her conniving mother, Velma, sometimes overplayed by Pamela Moore. But in her defense it must be said Miss Moore was in fine voice and did a wonderful job on the amusing song, “Miss Baltimore Crabs.”

Tracy has simple goals in wanting to be, “President of the World or a Rockette,” but when Tracy decides to try out for a spot on Corny’s show, her first studio encounter with Link brings on the delightful wedding fantasy number, “I Can Hear the Bells.” It was beautifully staged with the full cast and more glorious costumes. As for handsome young Mr. Boudreaux, he soon brought the house down singing, “It Takes Two,” with more gyrating pelvic moves than Elvis ever dreamed possible. No wonder the University of Oklahoma has tapped this well-known Montgomery County actor for its forthcoming freshman class in Musical Theatre.

Once selected for the show, Tracy takes some mean-spirited teasing from the snarky girls in the cast, especially, jealous Amber. When Tracy is snottily asked, “Where do you go after Special Ed?” the reply of “Congress!” brought a political roar of approval from the audience. Meanwhile, Edna and Tracy find new fashion possibilities for full figured gals at Mr. Pinky’s Hefty Hideaway dress shop. In one of his three roles in this production Scott McWhirter plays Pinky, as another knockout number gets under way with, “Welcome to the 60’s.” It features Tracy, Edna and the full cast led by the sensational Dynamites trio of Miatta Lebile, Lani Boykai and Sarah Kalala. 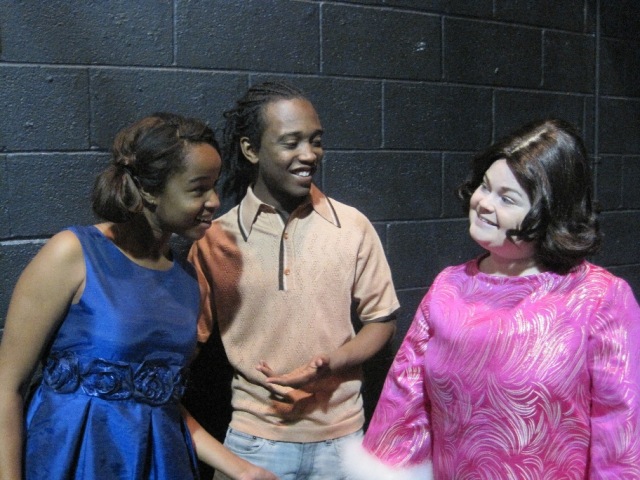 And speaking of sensational, how about song and dance dynamo, Donté Wright, singing “Run and Tell That,” in the role of Seaweed? He lights up the stage with electrifying support from both Cheznay Dones (as Little Inez) and the terrific ensemble. Another real star of the show arrives with red-hot mamma, Tamara Siler, playing “Motormouth” Mabel for the smashing song, “Big, Blonde & Beautiful,” that closes Act One.

The second act has no shortage of its own delights as the plot thickens a bit. You see, the Corny Collins Show was segregated (except for “Negro Day” once a month). Tracy and her friends lead the charge to change all that and land in the crowded Women’s House of Detention for a rousing “Big Dollhouse” number that may give prostitutes great ideas for flashy new outfits. How about a rainbow-sequined mini-dress? Wow! Another highlight is Edna and Wilbur’s love duet, “Your Timeless to Me.” Boudreaux and Miss Coates again show their vocal skill and charm in the “Without Love” quartet nicely rounded out by Mr. Wright and Miss Beimeister.

Perhaps the controversial song, “I know Where I’ve Been,” (It was almost dropped from the original production) turned out to be the most significant. The beautiful song is essentially an anthem of the civil rights movement, and the audience cheered with wild approval when it ended. A few songs later they were cheering again for the grand finale of “You Can’t Stop the Beat.” That song’s title seemed to sum up the whole wonderful experience. Bravo!

David Dow Bentley III, writes columns about the performing arts which are featured in newspapers from the East Coast to the Gulf Coast. A member of the American Theatre Critics Association (ATCA), The International Theatre Critics Association, and America's oldest theatrical club, The Lambs, he also had long service as the editor of The Lambs' Script magazine. Mr. Bentley may be contacted via e-mail at ThePeoplesCritic3@gmail.com.
View all posts by The People's Critic →
This entry was posted in Broadway, HERE Lifestyle & Entertainment, Miscellaneous Reviews, The Courier Columns, The Villager Columns, Theater Reviews and tagged Broadway, Entertainment, Houston, Lone Star College-CyFair, musicals, plays, Reviews, Texas. Bookmark the permalink.