Last Saturday’s rousing “Guitars and Cadillacs” opening number from the onstage band may have been a bit too loud, but with the drums, 2 guitars, and keyboard at the ready, the solid “Family Tradition,” that followed had the audience well prepared for a country music main event: The HIGHWAYMEN Live at the Crighton Theatre. This Larry Martin Production was billed as a 25th Anniversary tribute to the original country “Highwaymen” super group of recording artists that included legends, Kris Kristofferson, Waylon Jennings, Willie Nelson, and Johnny Cash. This edition featured brilliant performers representing the latter three so authentically, that you would swear the original stars were in the room. Michael Moore played Willie Nelson and his music with mystifying accuracy. The same was true of Alan Dryman in his performance as Johnny Cash. No less stunning was Bob Gill’s performance as Waylon Jennings. If just one of these gents had gotten it so right it would have been worth the trip, but to see all three so completely embody these great legends was truly remarkable. With that authenticity in mind, allow me to use the names of the real legends as I describe the fine tribute program that followed.

With a black cowboy hat that sadly masked his handsome face in shadow, Waylon began with great guitar work as he sang a fierce and authoritative “Rainy Day Woman,” and followed with a commanding, “Bob Wills is Still the King.” Joking, “Did anyone see a fogged up bus out back?” he was then joined by Willie who did a fine job with “Mama Don’t Let Your Babies Grow Up to Be Cowboys,” while sporting the requisite tank top, beard, bandana and pigtails. I’m suspicious it  may really have been Mr. Nelson, who then continued in resonant and powerful voice with the amusing, “Beer For My Horses.” Next, the trio was completed as the audience heard a deep and unmistakable voice say, “Hello! I’m Johnny Cash.” The singer then launched into a perfect pairing of , “Folsom Prison Blues,” and “There Ain’t No Good Chain Gang.” 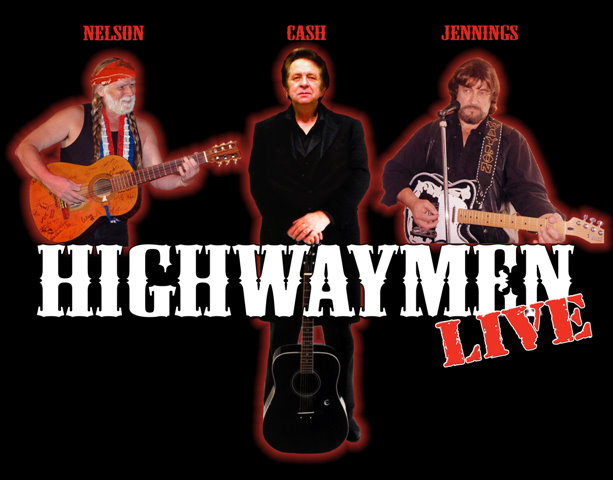 The threesome teamed well for “I’m Gonna Sit Right Here Until I Die,” and Waylon
then lashed out with an “Ain’t Livin’ Long Like This,” that was highlighted by keyboard and harmonica virtuosity from the band. Cash then sang a “Ghost Riders in the Sky,” that was serviceable, but not the best moment in the program. Willie followed with an amazing, “Help Me Make It Through the Night,” made more amazing by his dazzling solo work on guitar. Waylon tipped his hat to TV with the Dukes of Hazzard theme, and Cash followed with the poignant, “Will the Circle Be Unbroken?” Another astonishing Willie Nelson replication came with, “Forgiving You Was Easy,” and Act One closed with a fine version of “If I Can Find A Clean Shirt.”

Following the intermission a huge Texas flag descended from the rafters and Willie
delivered a rousing “Whiskey River,” with still more impressive guitar work. But his “Blue Eyes Crying in the Rain,” lacked clear enunciation and was a bit disappointing. After Waylon offered, “Only Daddy That’ll Walk the Line,” Cash fired back in rich bass with “Ring of Fire,” and “Tennessee Stud.” There was a touching tribute to America’s military veterans, and those in the audience were asked to stand and be recognized. Then, on a lighter note, the boys joked about silly song titles they were working on like, “If I’d a Shot You When I Wanted, I’d Probably Be Out By Now.” The fun continued as they all joined Willie for a joyful, “On the Road Again,” and Waylon supplied the gentle roll of “Luckenbach, Texas.” Cash countered with a hand clappin’ “I Walk the Line,” and a tender Kristofferson composition, “Sunday Morning Coming Down,” was full of heartbreak and longing in its vision of “…disappearing dreams of yesterday.” Before the night was over he also sang an interesting tribute to the American Indian titled, “Drums.” Waylon came in for a landing with, “I Don’t Want to Get Over You,” and an, “I’ve Always Been Crazy,” that was full of piercing vocal power and stunning band solos on guitar, keyboard, drums and harmonica. Willie’s final numbers included, “Poncho & Lefty,” the classic, “For All the Girls I’ve Loved Before,” and a lovely rendition of one of the great love songs, “You Were Always On My Mind.” An orange glow surrounded the proscenium, and a happiness glow surrounded the audience as the boys wrapped things up with a “Good-Hearted Woman” that was really good. When I chatted with promoter, Larry Martin, outside the theatre, he told me as soon as he became aware of this “Highwaymen” tour, he was sure it would be the right fit for the Crighton. Amen to that!

David Dow Bentley III, writes columns about the performing arts which are featured in newspapers from the East Coast to the Gulf Coast. A member of the American Theatre Critics Association (ATCA), The International Theatre Critics Association, and America's oldest theatrical club, The Lambs, he also had long service as the editor of The Lambs' Script magazine. Mr. Bentley may be contacted via e-mail at ThePeoplesCritic3@gmail.com.
View all posts by The People's Critic →
This entry was posted in Concert Reviews, Miscellaneous Reviews, The Courier Columns, Theater Reviews and tagged Celebrities, concerts, Conroe, country, Entertainment, Houston, music, Reviews, Texas, theatre. Bookmark the permalink.

1 Response to HIGHWAYMEN Very Much Alive at Crighton Theatre