For 59E59 Theaters “The Best” Is Here Right Now 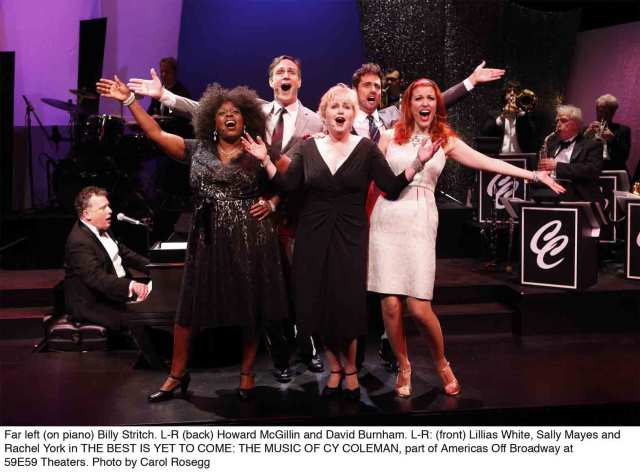 Quietly residing on Manhattan’s East Side between Park and Madison Avenues, the 59E59 Theaters complex is an unpretentious gem with delightfully intimate theater spaces. The current production in Theater A is one that should not be missed by lovers of the American Song Book. Titled, The Best is Yet to Come: The Music of Cy Coleman, and directed by lyricist and longtime Coleman collaborator, David Zippel, this tribute to the great composer’s music wraps its arms around the audience right from the Ensemble’s elegant first notes of the title tune. With just a few splashes of glitter (to pick up the pleasant pastel lighting designs of Michael Gilliam), the smooth curves of the
attractive art-deco bandstand set (designer, Douglas W. Schmidt) embrace the talented 8-piece orchestra skillfully led by musical director, Billy Stritch, presiding on the eighty-eight.

Stritch, who sings beautifully in addition to dazzling on the keyboard, costars with the show’s stellar cast of Broadway veterans, David Burnham, Howard McGillin, Lillias White, Rachel York, and Sally Mayes.  At the performance this critic attended, Natascia Diaz was a brilliant stand-in for the absent Miss Mayes, and offered a sassy opening solo with, “Nobody Does It Like Me.” Rachel and Lillias then joined her for a sexy and shimmering trio of, “You Can Always Count On Me.” Howard followed with a slick and sophisticated, “You Fascinate Me So.” Lillias took to the stage for a rousing rendition of the witty and fun-filled, “Don’t Ask a Lady.” With shining eyes and a beaming smile, handsome Mr. Burnham offered a jazzy, “I’ve Got Your Number,” and then took a bit of teasing during a snarling duet of, “What You Don’t Know About Women,” from Natascia and Rachel. Rachel’s “Come Summer” was sultry and easy going one minute and soaring the next.

Attention shifted to Mr. Stritch at the piano as he delivered a smooth and mellow, “It Amazes Me,” that was really quite amazing. Natascia, Rachel, Howard and David joined forces for a “Money Medley” that featured such tunes as, “On the Other Side of the Tracks,” “Big Spender,” and “Never Enough.”

Then it was time for Lillias to tear the roof off the room with the devilishly saucy pairing of, “Never Met a Man I Didn’t Like,” and an uproarious, “The Oldest Profession,” with the latter hilariously tipping its hat to the exhaustions of prostitution. In Red Hot Mama style, Miss White absolutely stole the show with that number, and the audience was howling amid shouts of “Brava!”

Rachel and David calmed things down nicely with, “Only the Rest of My Life,” a cute number (one of many in the show with lyrics by Mr. Zippel) that chronicles the ups and
downs in a romantic relationship. Then Billy and Lillias combined their playful talents for the joyful title tune from one of Coleman’s hit musicals, Little Me. Next, the sharp clarity of Ms. Diaz’ voice was on full display in her duet with David of the devilishly witty, “The Measure of Love.” Stritch followed with a cheerful, “Some Kind of Music,” that reminded me of the seemingly effortless vocal styling of the late Mel Torme.

The next set took on an elegant formal air as the cast appeared in eveningwear with lovely gowns on the ladies and white dinner jackets on the gents. (Costume designs, William Ivey
Long). Natascia established a chic nightclub atmosphere singing an elegant, “With Every Breath I Take.” Dressed in fiery red chiffon and dapper Fedora, Rachel then lit up the room with a sexy, “Hey, Look Me Over,” that closed sweetly with, “The Doodling Song.” Her graceful moves on stage were a tribute to choreographer, Lorin Lattaro.

While he may have worked a bit too hard “connecting” with audience members during the number, David had perhaps his best moment of the night singing a fine, “Witchcraft,” that could be called Sinatra-esque. Another fine moment went to Howard as he brought a kind of wise maturity to the song, “I’d Give the World.” For the song, “Those Hands,” the choreography may have been a bit too cutesy, but Lillias led the cast in a none-the-less fitting tribute to the talented fingers of pianist, Billy Stritch.

There would be the sparkling requisite finale of hits like, “It’s Not Where You Start,” “If My Friends Could See Me Now,” “Hey There, Good Times,” and, of course, “The Best is Yet to Come,” but what lingers in memory is another Zippel lyric for “It Started With A Dream.” That song speaks of a “sudden spark of inspiration,” and we certainly have it here. The tune seemed a fitting culmination for this wonderful musical and the man who inspired it. And there he was at last, Cy Coleman himself, as he made a final appearance via ghostly projection above the stage. The best has really come, and I’m glad I got to see and hear it.

David Dow Bentley III, writes columns about the performing arts which are featured in newspapers from the East Coast to the Gulf Coast. A member of the American Theatre Critics Association (ATCA), The International Theatre Critics Association, and America's oldest theatrical club, The Lambs, he also had long service as the editor of The Lambs' Script magazine. Mr. Bentley may be contacted via e-mail at ThePeoplesCritic3@gmail.com.
View all posts by The People's Critic →
This entry was posted in Broadway, Concert Reviews, Miscellaneous Reviews, Nightclubs and tagged Broadway, Celebrities, concerts, Entertainment, music, musicals, nightclubs, Reviews, theatre. Bookmark the permalink.