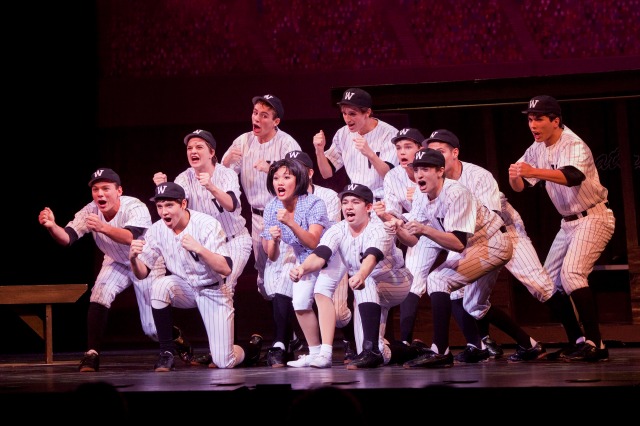 As I begin this report on one of the most delightful celebrations of musical theatre that has ever graced a Houston stage, I can only hope to bring the kind of skill to my task that was so abundant at the recent Tommy Tune Awards program held in the enormous Sarofim Hall of Houston’s Hobby Center. Subtitled as “Honoring Excellence in High School Musical Theatre,” it was to be a night to remember right from the beginning. My guest and I first enjoyed an elegant private reception for Theatre Under the Stars patrons being held in the TUTS Founder’s Club. With his full head of wavy salt & pepper hair as the only clue to his 72 years, the man of the hour looked amazingly fit and youthful as the strikingly tall Mr. Tune stopped by to mingle with the guests before the show. He seemed not to have aged a bit since 2003 in New York when I had been invited backstage to meet him on the night I reviewed his sensational Broadway revue, “Tommy Tune: White Tie & Tails.” A fellow Longhorn graduate, (He has been named one of UT’s “Distinguished Alumni”), he then kindly presented me with an autographed copy of his juicy theatrical memoir titled, “Footnotes.” 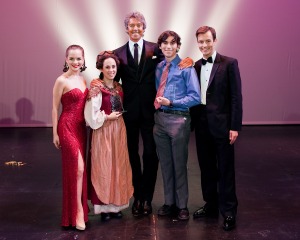 Tune’s years on Broadway had won him nine Tony Awards for his work in productions of Seesaw, My One and Only, A Day in Hollywood/A Night in the Ukraine, Nine, Grand Hotel, and The Will Rogers Follies.  He was also awarded the National Medal of Arts in 2003 by President Bush. But on this night in Houston the famed actor, dancer, choreographer, and director would gladly take a back seat to the real stars of this gala evening named in his honor. Packing the house were the hundreds of talented students from 45 Houston area high schools who had participated in the nominated musical productions competing for this year’s awards. As spotlights scanned the room, television cameras from ABC-TV channel 13 were on hand to record the event for later telecast on Sunday, June 5th. There was an unmistakable buzz of excitement from the beautifully dressed and largely youthful audience consisting of cast members, teachers, and production staffs, as well as the family members of the many nominees. The elegant attire of the eager young thespians gave the appearance of  prom night to the occasion. 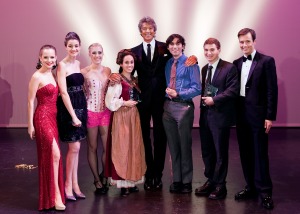 Music Director & Conductor, Michael Moricz was at the helm of the very wonderful Tommy Tune Awards Orchestra, and as the Overture medley of show tunes began, a beautiful series of color photos and videos from nominated student productions was projected on the large screen at center stage. This brought the excitement to pandemonium levels as large groups from the various schools cheered loudly at the sight of their own school’s productions. It seemed a more exciting atmosphere than at a high school football game, and here in Texas that is a mighty claim. 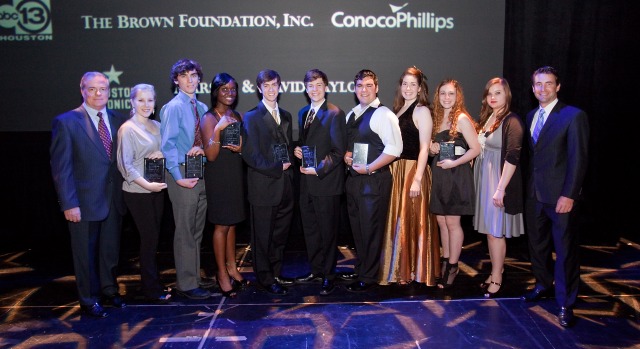 With Jim Bernhard acting as Emcee, the sleek and elegant Mr. Tune glided to the microphone. A native Houstonian, he began his remarks with, “It’s so swell to be back home!” He then joked about his own presence at the event as he quipped, “When you go to The Oscars, does Oscar come out to meet you? When you go to The Tonys, is there really a Tony?” He then closed his brief remarks saying, “I know what these kids give up to do these shows, and tonight we’re going to prove it was worth it.” He wasn’t kidding. 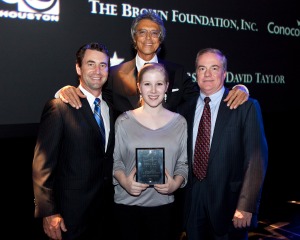 Everything that followed would validate the show’s claim to musical theatre excellence. The eight shows nominated for Best Musical would each perform a full production number, beginning with Houston Christian Academy’s “Tevye’s Dream” sequence from Fiddler on the Roof. With a polished look that could have sent the performance directly to Broadway, it set the standard for the evening. The seven stunning production numbers that followed included, 25th Annual Putnam County Spelling Bee (Klein H.S.), The Boy Friend (Westchester Academy), Into the Woods (James E. Taylor H.S.), Oklahoma! (Pearland H.S.), another edition of Into the Woods (from Episcopal H.S.), Guys & Dolls (Seven Lakes H.S.), and a dazzling rendition of the Damn Yankees hit, “Shoeless Joe from Hannibal, Mo.,” that helped capture Stratford High School the coveted award for Best Musical. The buildup to the awards for Best Actor and Best Actress had a special excitement as the nominees in those two categories came forward in costume to form dramatic frozen tableaus across the stage. For both the “Best Leading Actor Nominee Medley,” and the “Best Leading Actress Nominee Medley,” one character at a time would burst to life in song and then be joined by the ensemble chorus of fellow nominees before returning to frozen position as the next performer stepped to life. As were the other performances of the evening, the segment was brilliantly executed under the leadership of TUTS Artistic Director, Michael Tapley with his team including Richard Winkler (Lighting), Christopher “Kit” Bond (Sound), Roger Allan Raby (Production Stage Manager) and Lynda Radisi (Stage Manager).

[NOTE: As Best Leading Actor and Actress, Price and Gerachis will go on to compete at the national level for the JimmyTM Award at the National High School Musical Theater Awards in New York City.]

Tune addressed the audience again and spoke with great affection of his legendary Lamar H.S. drama teacher, the late Ruth Denny, who had first inspired his love of theatre. Remarking that, “We must always aspire to inspire until we expire,” he presented this year’s Ruth Denny Scholarship Award to Logan Elizabeth Hardy of Cypress Ranch High School. (See additional scholarships awarded below).

Perhaps most impressive of all was the sense of supportive camaraderie that seemed to make everyone a winner while binding all these competing schools together as they cheered for each other’s victories. The abundant bubbling energy, creativity and enthusiasm of youth seemed to suggest we have a very wonderful next generation in the making, in spite of the bad news that so often gets the attention of the media. One young man’s acceptance speech began with, “I don’t need drugs because this feels so amazing!” Perhaps the whole night was best summed up by one old quotation that was mentioned:

“The Theatre is magic, and blessed are those who make that magic.”

Bentley’s columns have appeared in newspapers from the East Coast to the Gulf Coast and may be viewed online at the website: www.ThePeoplesCritic.com E-mail may be directed to ThePeoplesCritic@earthlink.net .

David Dow Bentley III, writes columns about the performing arts which are featured in newspapers from the East Coast to the Gulf Coast. A member of the American Theatre Critics Association (ATCA), The International Theatre Critics Association, and America's oldest theatrical club, The Lambs, he also had long service as the editor of The Lambs' Script magazine. Mr. Bentley may be contacted via e-mail at ThePeoplesCritic3@gmail.com.
View all posts by The People's Critic →
This entry was posted in HERE Lifestyle & Entertainment, Miscellaneous Reviews, The Courier Columns, The Villager Columns, Theater Reviews and tagged Broadway, Celebrities, competition, contests, Entertainment, Houston, musicals, Reviews, Texas, theatre. Bookmark the permalink.