Murderous Fun From “Curtains” at TUTS 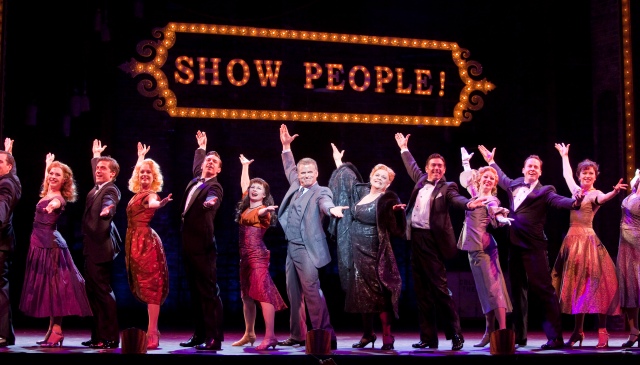 I have always felt it best to reveal my personal prejudices before proceeding with a review. Thus, dear reader, I must tell you that I have had a favorable disposition regarding the musical, Curtains, ever since I almost saw David Hyde Pierce star in the Broadway production a few years ago. I say, “almost,” because on the night I attended that original run in New York, Mr. Pierce was absent, and his capable understudy took over the role of NYPD detective, Lieutenant Frank Cioffi. The star’s absence not withstanding, the show was great fun then, and continues to be in the current production now playing at Theatre Under the Stars in Houston’s Hobby Center.
Along with the marquee power of soap opera stars Kim Zimmer and Robert Newman, a variety of elements combine to make this a very appealing musical. The witty book by Rupert Holmes (from an original book and concept by Peter Stone) is full of the clever twists and turns of a murder mystery, while at the same time keeping the audience laughing throughout the performance. More importantly, the music (John Kander) and lyrics (Fred Ebb, with additional lyrics by Kander & Holmes) are absolutely wonderful and particularly appealing on first hearing. This is a show that will allow you to go home humming its many catchy tunes, and it harkens back to a Broadway era that had many such shows delighting audiences while not taking themselves too seriously. Mark S. Hoebee skillfully directs this TUTS version. Conductor, Tom Helm, supplies fine Musical Direction.
With a kind of play-within-a-play structure, the lush Overture fades and the curtain rises to reveal the feisty cast of another musical on its Opening Night in Boston. The show is Robbin’ Hood of the Old West. We join the cast during the rousing closing scene and we are just in time to enjoy some high-energy hoedown dancing (choreography, JoAnn M. Hunter), as we meet the despised no-talent star of the show, Jessica Cranshaw (hilariously played by Happy McPartlin). With one exception, the critics savage the show, with the worst notice of all coming from the Boston Globe critic, Daryl Grady (Aaron Galligan-Stierle). The show’s producers (Kim Zimmer as Carmen & Dick Decareau as Oscar) along with its feuding composers (Helen Anker as Georgia & Kevin Kern as Aaron) gather to read the reviews. They, in turn, savage the critics with the very clever song, “What Kind of Man?” You might guess it is one of my favorites, and perhaps we critics had it coming.
Meanwhile, no one sheds a tear when Jessica is found dead backstage after a final curtain call. The cast gathers in mock memorial as they sing a kind of funeral dirge with, “The Woman’s Dead.” It’s a riot. Enter our star to solve the crime, Robert Newman as detective Lt. Cioffi. 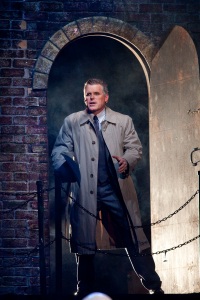 Newman, a 28-year veteran of “Guiding Light,” is clearly an acting pro as his performance nicely captures the dynamics of a probing police detective who also longs to be an actor. Cioffi tells the cast they must all remain in the theatre until the murder is solved, but I won’t go into the details of that investigation lest I spoil the mystery. Another solid performance comes from Ed Dixon in the role of Christopher Belling, director of Robbin’ Hood of the Old West. Dixon has compelling presence on stage, a commanding voice, and great comic timing. Bearded, portly, and with a British accent, he reminded me of the droll delivery one might associate with Sebastian Cabot or Peter Ustinov.
As the murder investigation continues the producers keep busy trying to rebuild the show with the crime scene sequestered cast. One of the musical’s highlights is the delicious number, “Show People,” which will have to become a lasting anthem of the musical theatre in the tradition of tunes like, “There’s No Business Like Show Business.” It’s a knockout from the full company, as Miss Zimmer shows a belting vocal power reminiscent of Ethel Merman, and Newman displays a solid singing voice and natural stage presence. The dancing is terrific right down to the Rockette-style high kicks of the dance line.

But there are tender tunes as well. Cioffi is smitten by lovely young understudy, Niki (Amanda Rose), and while trying to solve the backstage murder he sings her the sweet, “Coffee Shop Nights,” describing the lonely life of the detective. 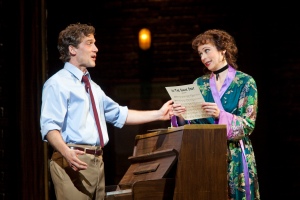 Other very touching ballads included “I Miss the Music,” from full-voiced Mr. Kern, and his pairing with Miss Anker for “Thinking of Him.”
Before Act One has ended we meet producer Carmen’s husband, co-producer Sidney (Daniel Marcus) and their ditzy would-be-starlet daughter, Bambi (Anne Horak). Then, in another smashing number, Georgia and partner, Bobby (David Elder) lead the ensemble in the dazzling, wine-red vision of “Thataway!” 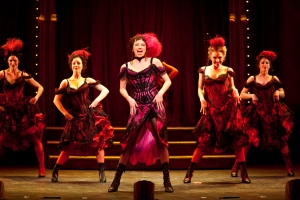 The western saloon-style set (designer Robert Andrew Kovach) is a pip, with great central lighting (designer, Charlie Morrison) framing the performers, and eye-popping costumes (designer, Tracy Christensen) adding to the glow. Best of all was the ensemble choral work in this sassy number with the saloon gals and guys nailing the complex and melodic counterpoints, as well as the vibrant choreography.
Act Two had plenty of highlights of its own as the quest to find the murderer continues in the spookily lit staging of “He Did It.” Zimmer belts out another home run leading the sophisticated wit of, “It’s A Business,” with great support from the strong male ensemble. The merriment and folksy dancing of the “Kansasland,” number will remind many of Seven Brides for Seven Brothers, and Bambi comes into her own during some sensuous and slithering Apache dancing with Bobby. 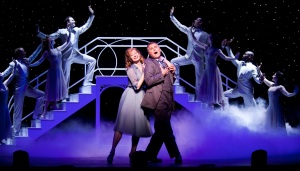 Then we have the darling love duet of Cioffi and Niki, as the ensemble joins them in the dreamlike, “A Tough Act to Follow,” that begins with gentle soft shoe, moves to graceful waltzing, and then explodes onto a smoky central stairway to the stars. It’s another showstopper, but just sets the stage for the ultimate “In the Same Boat” number that threads its way through the show and culminates here. 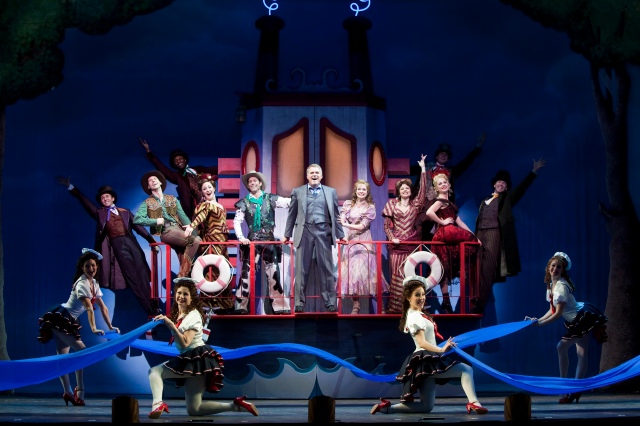 It is a complete joy, beautifully blended both vocally and visually, proving once more that as the song says, “There’s a special kind of people known as show people.” Amen!
CURTAINS continues at Houston’s Hobby Center through April 10, 2011, with performances at 7:30 p.m. on Wednesday, Thursday and Sunday, 8 p.m. on Friday and Saturday, and with 2 p.m. matinees both Saturday and Sunday. For tickets and information visit the website at http://www.TUTS.com or call 713-558-8887 (outside Houston: 888-558-3882).

David Dow Bentley III, writes columns about the performing arts which are featured in newspapers from the East Coast to the Gulf Coast. A member of the American Theatre Critics Association (ATCA), The International Theatre Critics Association, and America's oldest theatrical club, The Lambs, he also had long service as the editor of The Lambs' Script magazine. Mr. Bentley may be contacted via e-mail at ThePeoplesCritic3@gmail.com.
View all posts by The People's Critic →
This entry was posted in HERE Lifestyle & Entertainment, Miscellaneous Reviews, The Courier Columns, Theater Reviews and tagged Entertainment, Houston, musicals, Reviews, Texas, theatre. Bookmark the permalink.