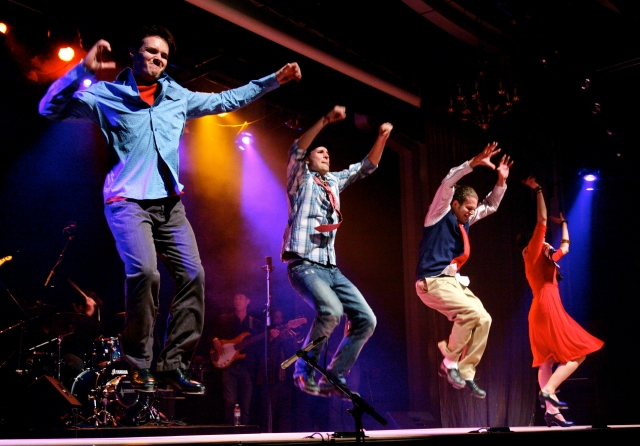 It could have been an awful faux pas. I am accustomed to 8 pm curtain times at the Crighton Theatre, so on Saturday night, with a few minutes to spare, I stepped into one of the chic art galleries next to the theatre for a peek at the latest showing. Crighton manager, Jim Bingham, had spotted me down the block and dashed in behind me with the evening’s tickets in hand. The show, with a surprising 7:30 curtain, had just begun without the critic. Yikes! What a scandal! My guest and I beat a quick path to the theatre and quietly slipped inside where I was delighted to hear it announced from the stage that the “warm-up is over,” and the real show was about to begin. And what a show it would be. Titled, “Rhythmic Circus: Feet Don’t Fail Me Now,” it starred a cast of four remarkable tap dancers (three guys and a gal), and a powerhouse seven-piece band that would rock the room for two hours with funky music that was pleasingly loud and only occasionally too loud. Considering the really bad musical groups that so often show up on late night TV, I would suggest that if Letterman and Leno have not yet signed this group for an appearance, they should do so at once.
Several of the group’s members shared duties at the microphone, and jocular lead singer, Ricky, seemed to handle much of that with a beaming smile that lit up the room for fun. Musically, I lean conservative like any sensible old-timer. Give me Rodgers & Hammerstein and I’m happy. But this show, while heavily hip-hop / rap in style, was so infectiously lighthearted, so creative, and so brilliantly danced that it was really irresistible. I had heard the group just played a 1200 seat showroom in Lake Charles the night before, and I thought how lucky we are that the Montgomery County Performing Arts Society could capture them for such a dazzling night in the intimate and lovely Crighton Theatre.

Suddenly there might be a complete change of pace with the breezy and bluesy lighting and harmonies of a song like, “I Believe.” One gent in the cast was nicknamed “Heatbox” Heaton and he could make simply amazing sounds with just his mouth and the microphone. Another amazing set just involved two guys slapping their thighs and the sides of the folding chairs they were sitting on. Sound boring? Not a bit! (Amusingly, one of the fellows claimed to have attended Julliard on a “Chair Scholarship.”) A number might start with a dance solo that quickly becomes a duet, then a trio, and finally an explosive quartet of stunning tap from a group that seems to have an inexhaustible reservoir of energy. I wonder what Donald O’Connor, Gene Kelly and Fred Astaire would think. I bet they would be cheering like the rest of the dazzled audience. It would be hard to say when there has been this much concentrated excitement on the Crighton stage.
After intermission there was some jazzy hand jive, and then a number that was full of wonderful Latin rhythms, rapid-fire conga drums, and fiery solo moments on trumpet, drums and keyboard. The dancers then joined the musicians as their dancing shadows climbed the walls of the theatre. The effect was sensational in creating a kind of organized but artistic chaos.

There were dance segments that appeared to involve stepping on electrified floor mats that created another layer of sounds while reminding me of Tom Hanks dancing on that floor keyboard in the movie, “Big.”
There was a circus-like number with the lead dancers colorfully dressed as drum majors leading the band, but that was all a bit too noisy for my ears. Much more pleasant were the delightful harmonies the group offered in the a cappella sounds of the “Boogie Monster.” They might want to consider more such singing in future productions.
I recall that outside the theatre during the Intermission, an Australian visitor named Anand pointed out to some of us the glamorous rising moon over the theater. It seemed particularly brilliant, and he mentioned astronomers had declared it a “Super Moon,” as it was the closest the moon had been to the earth in some 18 years. How appropriate to have a Super Moon on the night of such a super show!

David Dow Bentley III, writes columns about the performing arts which are featured in newspapers from the East Coast to the Gulf Coast. A member of the American Theatre Critics Association (ATCA), The International Theatre Critics Association, and America's oldest theatrical club, The Lambs, he also had long service as the editor of The Lambs' Script magazine. Mr. Bentley may be contacted via e-mail at ThePeoplesCritic3@gmail.com.
View all posts by The People's Critic →
This entry was posted in Concert Reviews, Dance Reviews, Miscellaneous Reviews, The Courier Columns, Theater Reviews and tagged concerts, Conroe, Entertainment, Houston, music, Reviews, Texas, theatre. Bookmark the permalink.