A World of Wonders From “Billy Elliot”

As I take pen in hand tonight, I find myself wondering if the Seven Wonders of the World should be extended to eight in order to include a stunning, BILLY ELLIOT the Musical, currently exploding on the stage of Theatre Under the Stars at Houston’s Hobby Center. With book & lyrics by Lee Hall, music by Elton John, and the dazzling choreography of Peter Darling, Stephen Daldry has directed a show that will be long remembered by all who see it. That is, of course, if they can believe their eyes to begin with. That is not so easy.

I confess having come to this “party” a bit late, having only discovered the charming Universal Pictures motion picture of the same name just a couple of months ago. As soon as I viewed the film I knew I would have to see the musical. I could never have imagined how well the story would translate to the stage. Central to that success is the casting of the lead role of Billy. I am confident that all four of the young lads currently sharing that difficult assignment must be exceptional performers.

At the performance I attended on Press Night the task fell to the very brilliant Daniel Russell, a 14 year-old Australian lad, who from an early age was instructed in tap, ballet, jazz and modern dance by his own parents. The results prove beyond a doubt that Daniel has learned his lessons well.

The plot of this touching musical comedy/drama centers on real events surrounding the devastating coal miner’s strike in 1984 Great Britain. The action plays out in a mining town of Northern England where Billy lives with his stern Dad (Rich Hebert), his senile Grandma (Patti Perkins), and his angry older brother, Tony (Jeff Kready). Billy’s mum (Beverly Ward in a series of ghostly and tender visions) has passed away some time earlier leaving him feeling very much alone. He finds comfort in the sweet letter his mother had written for him to open when he turned 18, but young Billy could not wait that long to read it. Not aggressive enough to please his father with success in boxing, the girls’ ballet class held at the same gymnasium intrigues Billy. The dance teacher is Mrs. Wilkinson (Faith Prince), and she quickly spots the boy’s unusual talent.

Casting a long shadow over all of that is the plight of the striking miners, first revealed in their robust and lusty chorus with the solid full company opener of “The Stars Look Down.”

With the union conflict established and his father and brother among the striking miners, we are suddenly whirled inside Billy’s home via the very mobile and cleverly minimal set design of Ian MacNeil, with its family kitchen below and Billy’s upstairs bedroom right above. Just as quickly the set reverts back to the ballet rehearsal space where Ms. Prince’s portrayal of Wilkinson might remind one of Miss Hannigan in Annie as she whips her young dancers into shape. And what dancers the very young ladies in this cast prove themselves to be during the jazzy, freestyle dance fun of their Fosse-esque dance line. Rachel Mracna offers an amusing performance as Debbie, Mrs. Wlikinson’s none-to-shy daughter, who would happily show Billy her “who-who” if he were interested. As long as I’m alluding to choreographer Bob Fosse, I think the girls nicely echo the “razzle-dazzle” of his Chicago choreography in the beautifully executed, “Shine” number, with some initial dance attempts from Billy.

Back at the house with the song, “We’d Go Dancing,” there is a poignant performance from clear-voiced Miss Perkins as senile Grandma shares sweet and hilarious recollections of her not always perfect relationship with Grandpa. 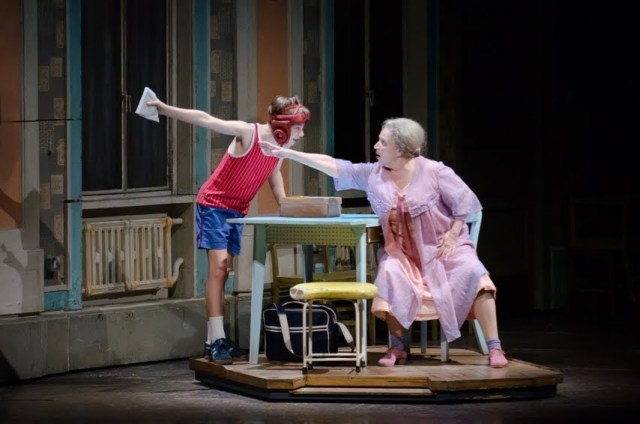 (In the well-staged scene, her memory of Grandpa and his drinking, smoking cronies comes to life on the stage with wonderful singing from the men’s ensemble). Then the union woes again take center stage with the amazing full company labor anthem, “Solidarity.” Accented by the sweet chorus of young girls, the brilliant choreography here has police, protesters, and ballet dancers weaving among each other in a clear delineation of the clash between the normal joys in life and the cruel circumstances that can disrupt a peaceful world.

Billy and his young cross-dressing friend, Michael (Griffin Birney) then light up the stage in an extravagant, lighthearted and endlessly creative number titled, “Expressing Yourself,” that perhaps best summarizes what this show is all about. The extraordinary ensemble dancing, costumes, and lighting (designer, Rick Fisher) are as dazzling as the rainbow tinsel curtain that suddenly embraces the action. And, oh, those giant dancing dresses should be saved for the Macy’s Thanksgiving Day parade! (Costume designer, Nicky Gillibrand ).

Calming things down beautifully is the tender and touching scene when Billy and Wilkinson read Mum’s Letter during the beautifully staged song, “Dear Billy.” Bring plenty of tissues for that one. The audience was left spellbound when it concluded, and seemed to sense there could not be even a whisper of applause to break that spell at song’s end. We are brought gently back to earth with the comic talent of Patrick Wetzel in the role of Mr. Braithwaite, the pianist for Wilkinson’s dance classes. He joins her and Billy for the delicious fun of a “Born to Boogie” that even features an impressive jump rope display.

Act One ends with the raging fury of the “Angry Dance,” that is yet another breathtaking display of young Russell’s seemingly endless reservoir of talent. The Men’s Ensemble joins him with the pounding of police batons adding to the frenzy the strike has generated. Oddly, it was here the production made its first mistake. The dancing, singing and excellent staging had already clearly defined the community rage the number represents, but the director apparently felt the need to bring noise and volume levels to such an annoyingly excessive crescendo that they distorted the speaker system and seemed to this reviewer to reduce the impact of an otherwise stunning number.

With Intermission house lights still up, Act Two began so cleverly with the miner’s Christmas talent show that many in the audience were at first uncertain the scene was not just some special intermission entertainment. With the continuing strike, the scene has an amusing giant puppet of the much-reviled Prime Minister, Maggie Thatcher. Then Billy’s dad comes forward to sing a haunting folk song of mining life, “Deep Into the Ground.” The rich voice of Mr. Hebert brings true passion to lines like, “I’ll love these dark, dark hills forever.” Amid the economically limited Christmas merriment, the suffering of the union workers continues. Their desperation is perhaps best captured in the fierce performance of Mr. Kready as Billy’s older brother, who passionately reminds all that the strike, “…is about our history, our rights, and our sacrifice.” But soon, as the strike is collapsing, he sadly concedes, “What’s the point of trying to keep your community and family together?”

Pivotal to the plot is Miss Wilkinson’s determination to have Billy audition for the Royal Ballet School in spite of his father’s initial protests. Hebert brings a gentle warmth and love to the father’s ultimate realization of his son’s special gifts. When the audition day finally arrives Billy is asked, “What does it feel like when you dance?” 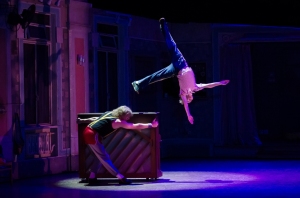 At that point, dear readers, fasten your seatbelts for Billy’s electrifying reply via a solo performance aptly titled, “Electricity.” It is an astounding and not-to-be-missed feat of dance, acrobatics, and literally mid-air flight that would be the envy of Peter Pan.

It must be said the show does have some of the no doubt typical coarse language from the miners (and sometimes the kids). The production could have been edited down a bit in a few overlong scenes, but aren’t I the pot calling the kettle black as I go in what must be my longest review ever. Also, I was puzzled as to how the director missed the chance for the touching embrace Billy seemed to clearly need as he struggled to say good-bye to Wilkinson before heading off to London following his acceptance to the Royal Ballet School.  But all such minor sins are forgiven in an explosion of brilliance when the full company offers what may arguably be the most joyful encore in my musical memory. Young Russell shines like some beacon of light in the firmament. He beams as he astounds us with these final astonishing and seemingly effortless flights of dance. It is one of those rare moments in life when we see someone who has found the way to exactly his right place in the universe. There can be no question about that.

David Dow Bentley III, writes columns about the performing arts which are featured in newspapers from the East Coast to the Gulf Coast. A member of the American Theatre Critics Association (ATCA), The International Theatre Critics Association, and America's oldest theatrical club, The Lambs, he also had long service as the editor of The Lambs' Script magazine. Mr. Bentley may be contacted via e-mail at ThePeoplesCritic3@gmail.com.
View all posts by The People's Critic →
This entry was posted in Dance Reviews, Miscellaneous Reviews, Theater Reviews. Bookmark the permalink.