When I fled my wintry home state of New York a week ago for the relative safety of Texas, I thought I had seen the last of snow for this season. As it turns out, the Texas Repertory Theatre had other plans for me in its wonderful production of the William Inge play, Bus Stop. 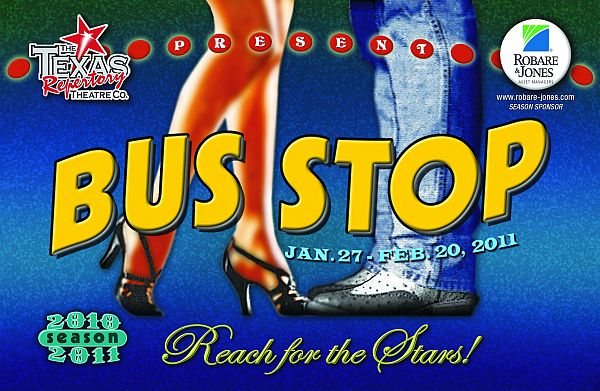 With skillful direction from the company’s artistic director, Steven Fenley, this delightful comedy had snow aplenty, along with a cast that was uniformly wonderful. The action takes place in Grace’s Diner, a rural mid-western bus stop, where a heavy snowstorm is in progress. As snow continuously falls during Act I, we view it through the upstage picture window in the restaurant. The onstage blizzard is carried off with such technical perfection I expected to see snow outside as I left the theater. The diner’s brightly lit set design had an authentic feel as well, with checkered tablecloths on scattered tables, lunch counter with stools, a bookshelf library, cheerful cherry print wallpaper, soda pop signs (remember Royal Crown Cola?), and a carved cigar store Indian presiding in one corner. Touches of Hank Williams music add to the country atmosphere at the beginning of each act, and every time the diner door opens, sounds of the howling wind are heard outside in the storm. (The scenic designer was Jodi Bobrovsky, with lighting & sound by Bryan Nortin).

Into this wintry world enter our snow-stranded bus driver, Carl (Jeffrey S. Lane), and his weary passengers who must now wait out the storm in the diner due to road closings up the line. We meet the feisty diner owner, Grace, with Lisa Thomas Morrison offering a charming and humorous portrayal. The saucy Grace is estranged from her husband. (“I’d be happy to see him, I guess, if he wasn’t gonna stay very long.”) But with her own apartment above the restaurant, Grace is not beyond an occasional tryst with Carl when the bus comes her way. (“I’m a restless sort o’ woman, and every now and then I need me a man to keep me from being grouchy.”) Her lunch counter flirtations with Carl are adorable.

One refugee from the bus is the sexy bombshell of a nightclub singer, Cherie (Eva Laporte) who may be more sexy than singer, but has a kind of sweet innocence in spite of a life that has clearly been in the fast lane where men are concerned. 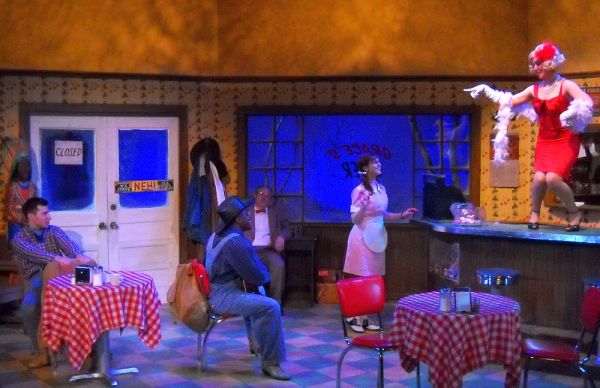 Not withstanding her Marilyn Monroe-style hair that looked too much like a wig, Miss Laporte totally “nails” this role in a wonderful performance that continued my impression that this entire cast, if magically transported to Off Broadway in New York, would have acquitted itself very well. High on my list of approval would be handsome young Zachary Lewis as Bo, the impulsive, lean and lanky cowboy/wrangle/rancher who became so infatuated by one of Cherie’s performances at the Blue Dragon nightclub that he has somehow corralled her onto this bus that can take them back to his Montana ranch to be married. The reluctant Cherie has become less than convinced that this is a good idea and wants to return home. Mr. Lewis’ performance is remarkable as the agitated and overbearing Bo who won’t take no for an answer. Looking sharp in his fringed suede western jacket, he is arrogant, sassy, and as cocky as can be. (“I just never realized a gal might not love me!”) His every move on stage reflects the tension of his youthful and desperate love for Cherie. His explosive outbursts of temper as she rebuffs him are so authentic that I wish the performance were on film so I could review it again. I predict a fine future for Lewis in the theatre. He lights up the stage.

Acting as a sort of referee for Bo’s persistent advance on Cherie is the town sheriff, Will (David Walker). Walker gives a warm and appealing performance as the caring and fair-minded sheriff. Then we have Bo’s ranch hand sidekick, Virgil, with Ray Phillips offering yet another sensitive performance. He is Bo’s wise and calming voice of reason, and Phillips does nicely performing as required on guitar. Meanwhile, an elderly passenger named Dr. Lyman (Ted Doolittle) is a retired college professor with a taste for both Shakespeare and young girls, with a bit of whisky on the side. He sets his sites on innocent Elma, and Bethany McCade plays this sweet and naive young waitress to absolute perfection. 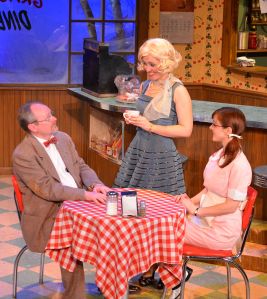 Elma is smitten by his gentle Shakespearian advances, and she even considers his offer that they spend time together in Topeka. Doolittle and McCade are both brilliant in crafting this brief but convincing May/December romance.

There are countless precious moments in the play, not the least of which is a little talent show the group puts on to amuse themselves during the storm. Elma and the professor play a scene from “Romeo and Juliet,” but Bo is unimpressed by the dialogue: “I don’t understand a word these people are saying!” Virgil offers a number on guitar, and Cherie changes into her “hot” red dress & feather boa (costume designer, Elaine Steinbach). She stands on the bar to deliver a sexy, “I Wanna Be Loved By You,” after the fashion of Helen Kane. Well Cherie should have no fear. This critic “loved” her and loved her fellow cast members as well. Bravo!

For this final weekend Texas Repertory Theatre will perform “Bus Stop” at 8pm tonight, with a 3pm Sunday matinee tomorrow, February 20, 2011. For tickets & information call 281-583-7573, or visit the website at http://www.TexRepTheatre.org

David Dow Bentley III, writes columns about the performing arts which are featured in newspapers from the East Coast to the Gulf Coast. A member of the American Theatre Critics Association (ATCA), The International Theatre Critics Association, and America's oldest theatrical club, The Lambs, he also had long service as the editor of The Lambs' Script magazine. Mr. Bentley may be contacted via e-mail at ThePeoplesCritic3@gmail.com.
View all posts by The People's Critic →
This entry was posted in Miscellaneous Reviews, Theater Reviews. Bookmark the permalink.