The Stuff That “Dreams” Are Made Of 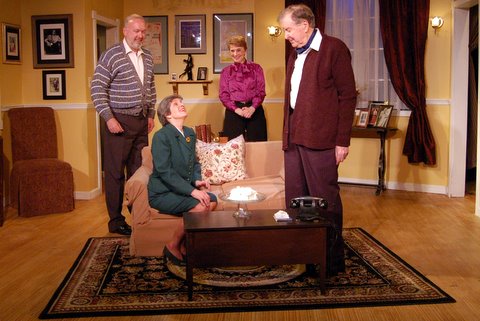 [ED.NOTE:New York 7/3/11 With the considerable “buzz” about town regarding the possibility of yet another production of Norman Beim’s sweet DREAMS, this review of the 2008 edition seems worthy of another look. — DDB]

Back in the 1960’s of another century, when Lewis Funke and John E. Booth published their landmark volume, “Actors Talk About Acting,” they included two wonderful interviews with the famed Lunts of Broadway, Alfred Lunt and Lynn Fontanne. When asked, “What is the secret of your teamwork?”, Mr. Lunt replied, “I don’t know. I guess each of us is interested in the other.” Perhaps it is that sense of intimacy that makes Norman Beim’s wonderful new play,“Dreams,”so very appealing.

Or perhaps it is the stellar direction from Sheila Smith, herself a Great White Way veteran, having performed in more than a dozen Broadway musicals, in addition to her extensive credentials as a writer and director. While inspired by the life of the legendary Lunts, the play is by no means attempting to be biographical. Instead, following some gentle, pre-curtain mood music evoking the golden era of our stars, we meet the fictional stage legends, the Lowes. Archie Lowe (touchingly played by Mr. Beim himself) and wife Lily Fairmont, (warmly portrayed by Carol Emsoff), are found comfortably, if reluctantly, retired in the sitting room of their lovely country house. 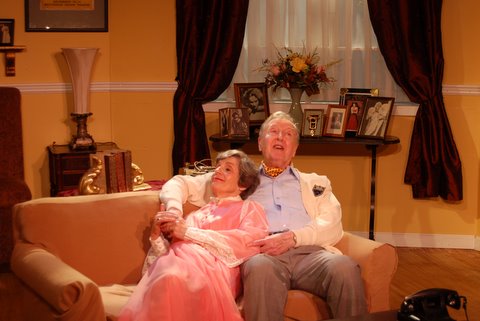 Carol Emsoff as Lily and Norman Beim as Archie

The lush scenic design by Peter Estella seemed to incorporate the kinds of elegant details that Funke & Booth described about the Lunt’s home in the pages of their aforementioned book. 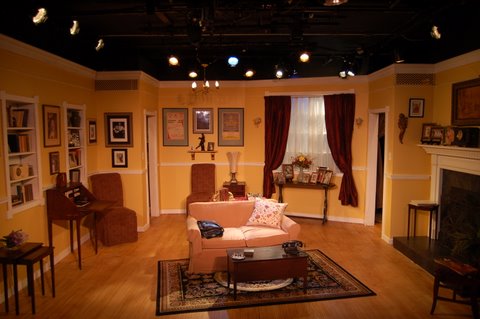 We see the soft, pale yellow of the room as it embraces elegant furnishings, velvet drapes of polished rust, seasonal flowers, recessed bookshelves full of leather-bound volumes, a charming fireplace with ornate screen, and its mantel full of antique framed mementos. Surrounding walls display the couple’s theatrical memorabilia, and the oriental rug that centers the room is creatively tilted slightly askew in a way that gives the scene a very three-dimensional dynamic, while everything is tastefully lit by Lighting Designer, Shaun Suchan. (A photographer as well, Suchan supplied all the publicity photos displayed here.)

Let us turn now to some sensational performances from very gifted actors. Beim and Emsoff immediately establish the warm affection between the Lowe’s, but that affection is tempered a bit by the kinds of friendly little verbal spats that one might expect of a couple married for so many years. Central to these discussions is the question of whether they should step out of retirement and risk a comeback in a controversial new play. Adding to the tension is our increasing awareness that Archie may not be in the best of health, but his eagerness to take on the new project is equaled by Lily’s trepidation, as she prefers to only think about writing her memoir. Throughout the debate on the matter there is a genuine warmth and sweetness to their talk of old friends, ancient scripts, past conquests on the stage, and even some amusingly morbid speculations on “What will you do after I‘m gone?” Archie’s sweet optimism counters with, “Why go out to meet death? It will find you soon enough!” 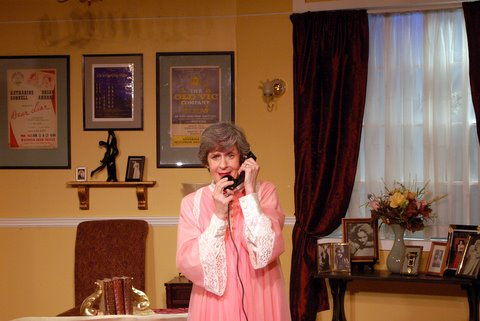 Meanwhile, the sitting room phone rings often, as assorted very convincing conversations, with characters we never meet, serve to effectively advance the plot until the decision is finally made for the couple’s return to the stage. When Archie asks Lily if she is happy about that, she quips, “I’ll let you know after we open!” The unexpected event that climaxes Act One, however, turns that plan on its head. 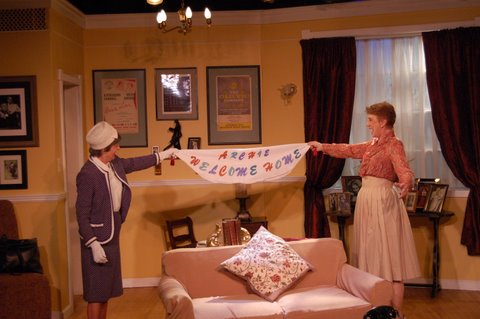 Without, I hope, giving away too much of the compelling plot, Act Two brings the issue of Archie’s health to the fore. Mr. Beim can break your heart as he skillfully conveys the handicaps and frustrations involved in a health situation that could come to any one of us in the blink of an eye. 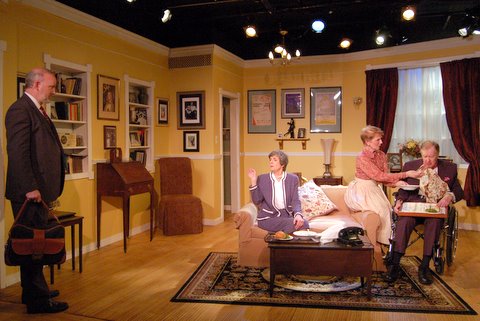 At his side during these trials is the loyal and loving Lily, so beautifully captured in the sensitive performance of Miss Emsoff. And lest the issue of illness put a damper on a fine production, Beim introduces two new characters in the second act with the German couple employed in the Lowe‘s home. 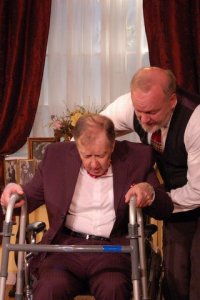 Fritz, the chauffeur (Gregg Lauterbach) and his wife Hilda, the cook/housekeeper (Carol Lambert), brighten the proceedings considerably, and the exuberant Miss Lambert is a radiant light in that firmament. 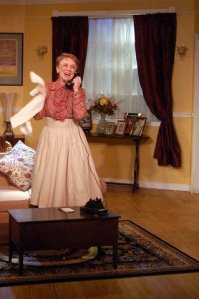 Her infectious enthusiasm and cheerful joie de vivre in the face of some difficult circumstances for the Lowes, raise the production to an even more satisfying level. She, as well as the rest of the cast, could give young actors lessons on how to convincingly carry off an animated phone conversation on stage. And have I mentioned the stunning costume designs of Katie Toker? The classic clothes on the ladies would have graced any fashion runway, and gave a special glow to the overall look of a show that I heartily recommend, especially in light of what I consider to be a very satisfying ending. Bravo! 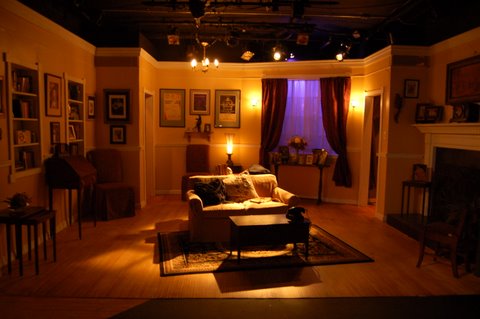 Will the darkened stage be lit once more by DREAMS ?